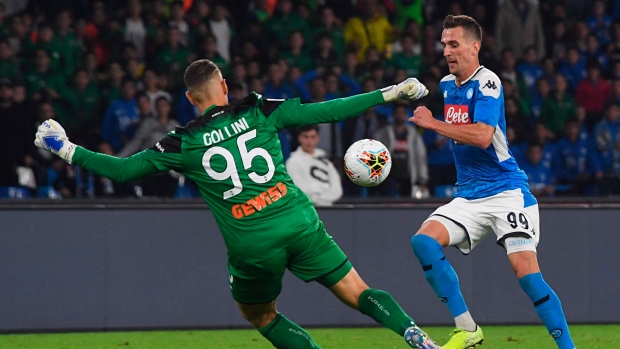 PARIS — Improving Monaco beat Marseille 3-1 in the French league on Saturday for a fifth win in six games, while the struggling visitors slipped to a fourth straight defeat despite taking an early lead.

After defender Guillermo Maripan equalized for Monaco, midfielder Aurelien Tchouameni headed in the second goal and forward Stevan Jovetic thumped in a superb angled free kick in the last minute to complete what ended up as a comfortable win.

Fourth-place Monaco moved one point behind third-place Lyon, which plays on Sunday, while Marseille remains in sixth spot.

Arkadiusz Milik started on the bench for Marseille after joining on loan from Italian club Napoli.

The Poland striker, who signed an 18-month deal late Thursday night, scored 48 goals in four seasons for Napoli but had not featured for the Italian club during this campaign.

Marseille took a deserved lead in the 11th minute when winger Nemanja Radonjic chased a long ball out of defence, sprinted clear down the left flank and finished confidently from close range.

For much of the first half Marseille looked the better side, but familiar frailties resurfaced.

Maripan headed in the equalizer from a corner just after the break, with Marseille goalkeeper Steve Mandanda rooted to the spot as the ball sailed into the top corner.

But Villas-Boas may have been better off securing things at the back.

Terrible defending cost Marseille again, this time as Tchouameni was completely unmarked when heading Aleksandr Golovin's corner from the left past the stranded Mandanda in the 74th.

Youcef Atal paid the price for scoring for Nice in a 1-0 win at Lens, limping off injured with a hamstring injury moments after his goal.

The speedy winger netted in the 49th minute when he cut inside the penalty area from the right and finished smartly with his left foot.

The win moved Nice one place up to 13th, while Lens was in seventh spot ahead of Sunday's games.

Second-place Lille needs to win at fifth-place Rennes on Sunday to move level on points with leader Paris Saint-Germain, which has a much better goal difference.

Lyon travels to local rival Saint-Etienne, which is missing several players because of the coronavirus.

Also, Raymond Domenech looks for his first win as Nantes coach away to midtable Metz.