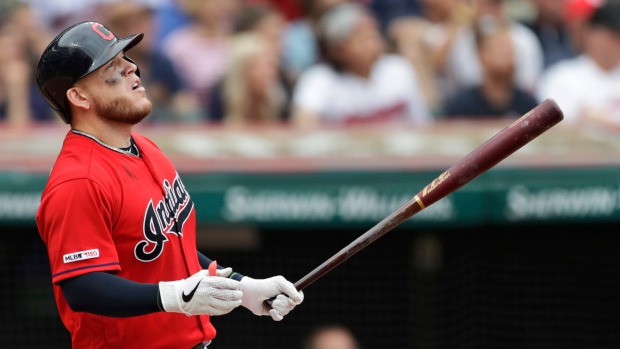 KANSAS CTY, Mo. — The Cleveland Indians could be without starting catcher Roberto Pérez for an extended period due to a fractured finger.

The team placed the two-time Gold Glove winner on the 10-day injured list Wednesday with a fractured right ring finger. Pérez had been playing with the injury since hurting on April 14, when he got crossed up catching a pitch from reliever James Karinchak in Chicago.

Pérez will visit specialist Dr. Thomas Graham in Dayton on Thursday to determine the best course of care going forward.

Manager Terry Francona said Pérez had been “feeling it” when he played. Francona said recent X-rays showed the injury “looked like it was starting to get a little bit worse, so we needed to stop that.”

“The best way I can put it is we’re going to do what’s in his best interest and not try to shortcut something,” Francona said before the Indians face the Royals in the third game of their four-game series. “He’s shown he’s willing to try to play with things, but we need to be really fair to him, too.”

Graham did surgery on an avulsion fracture in Pérez's thumb in 2015.

Pérez's batting average has plummeted from .238 to .131 since he got hurt. Francona noticed Pérez wasn't swinging at some pitches, perhaps because the finger was causing him discomfort.

“From my vantage point, I think he was getting locked up on pitches that he normally would swing at,” Francona said. "I just think there was some hesitation there. Hitting is hard enough. I even noticed it in between innings, though.

Austin Hedges will likely handle the bulk of catching duties while Pérez is sidelined.

The Indians have recalled catcher René Rivera from Triple-A Columbus. The 37-year-old was signed as a free agent on April 14 and assigned to the team's alternate site.

Rivera spent the past two seasons with the New York Mets. He's also played with the Angels, Braves, Cubs, Rays and Mariners.