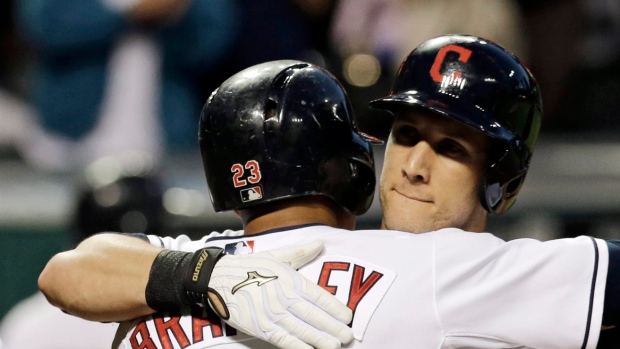 CLEVELAND - They're alive, barely, but it beats the alternative. The Indians' playoff hopes are fragile, and they're doing all they can to keep them from shattering.

Yan Gomes hit a three-run homer, Michael Brantley got three more hits and Cleveland stayed in the AL wild-card chase for at least one more day with a 6-4 win over the Kansas City Royals on Wednesday night.

A loss would have eliminated the Indians, but after blowing a 3-0 lead, they rallied and moved within 3 1/2 games of Kansas City and Oakland in the wild-card standings. There are four days left in the regular season.

"We said all year long as long as we have life, we're going to keep battling and that's exactly what we did tonight," outfielder David Murphy said. "We've had some good moments. We've had some bad moments this season, but hopefully we're going to be going into the last series of the season still alive."

The Royals, who haven't made the playoffs since 1985, fell two games behind first-place Detroit in the AL Central.

Zach McAllister (4-7) pitched 2 1-3 scoreless innings and Cody Allen worked the ninth for his 23rd save as the Indians kept their season relevant.

They're off on Thursday, but the Indians will closely monitor Kansas City's game in Chicago and Oakland's visit to Texas.

"It has all to do whether or not we have life coming into Friday," Murphy said, "so regardless we're going to come ready to play, but hopefully we're going to be playing for something."

Brantley has hit safely in 15 straight games and needs one more hit to be the first Indians player with 200 in a season since Kenny Lofton in 1996.

The Indians took the lead in the fifth off rookie Brandon Finnegan (0-1) on Carlos Santana's RBI groundout. Cleveland added a run in the sixth on Murphy's pinch sacrifice fly.

Cleveland entered the unusual series — the teams completed a suspended game on Monday — 3 1/2 games behind the Royals and the Indians ended in the same place. Unfortunately for them, they wasted a chance to pull closer and now have to win their final three games and hope for help from other teams to play in the post-season.

Billy Butler had three RBIs for Kansas City, which can lock up one of the two wild cards by winning one of four games in Chicago against the White Sox starting Thursday.

"I know things are close, we're close," Butler said. "We've got four games left. If we could do it right now, we'd be in a playoff spot. You can't help but realize that it's right around the corner, but you have to keep grinding and keep your head down."

Their flimsy playoff hopes fading, the Indians scored twice in the fifth to take a 5-4 lead.

Jason Vargas hit Michael Bourn with a pitch to open the inning and Royals manager Ned Yost pulled the left-hander, who has just one win in his last seven starts.

Jose Ramirez doubled off the wall and the speedy Bourn, waved around by third-base coach Mike Sarbaugh, scored the tying run on a headfirst dive into the plate, reaching in with his left hand to avoid catcher Salvador Perez's tag.

"When you see a guy dive into home like that you realize nobody's playing out the string," Indians manager Terry Francona said. "He was pretty fired up."

Gomes' two-out shot, his 21st homer, to straightaway centre gave the Indians a 3-0 lead in the first.

Santana walked three times, giving him 112 this season, the sixth most in club history. Santana has walked more than any major league switch-hitter since Lance Berkman (127) for Houston in 2002.

Indians reliever Bryan Shaw tied the club record with his 79th appearance, matching the mark set by Bobby Howry in 2005.

Cleveland's pitchers have combined for 1,419 strikeouts, nine shy of the major league record set by Detroit in 2013.

Indians: Nick Swisher rejoined his teammates after undergoing surgery on both knees last month. Swisher tried to play through pain for several months before deciding to have his knees "cleaned out." He expects to be ready for the start of spring training.

Indians: The Indians end a stretch of 30 games in 30 days with their final off day of 2014. They open a three-game series vs. Tampa Bay on Friday as Corey Kluber (17-9) tries to strengthen his case for the Cy Young.