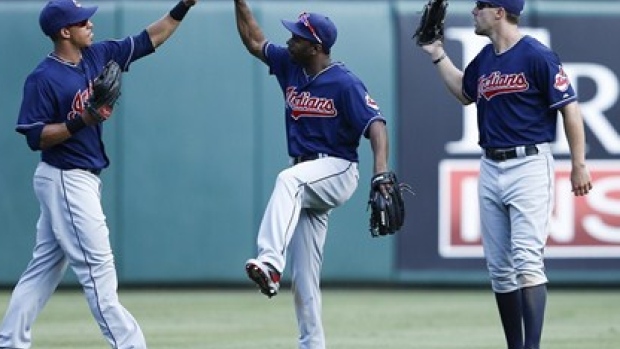 The Cleveland Indians have the chance to reach precisely that on Tuesday night at Progressive Field, where they'll host the Los Angeles Angels of Anaheim in the second of four games.

The Indians won Monday's opener, 4-3, to reach nine straight victories on home turf, but they face the prospect of going for No. 10 without one of their premier players.

Michael Brantley left Monday's game after taking a shot to the head and neck while trying to break up a double play in the third inning.

"He banged the side of his head on that slide," manager Terry Francona said. "He passed all the concussion tests, which is good. His neck is a little stiff. We'll see how he is when he comes in."

Brantley has hit better than .500 during an ongoing nine-game hitting streak and he leads the team in both home runs (11) and runs batted in (46).

His absence would mean increased need for production from Carlos Santana, who has three homers and nine RBI in 11 games since a stint on the disabled list.

"The good thing is, it's not just singles, he's going to hit home runs and get extra-base hits," Francona said. "We survived to a point with him really being cold and as he's getting hot it's going to help our offense."

Cleveland leads the majors with a 22-11 home record and they're hitting .304 there in the nine-game win streak.

Josh Tomlin gets the mound start after losing a 5-2 decision at Boston in his most recent start on Thursday.

He gave up nine hits to the Red Sox, but is holding opponents to a .190 average in Cleveland, where he's won 16 of 25 decisions.

He's never faced the Angels' Mike Trout, who's on an 11-game hit streak of his own.

Starting for Los Angeles is youngster Matt Shoemaker, who makes his sixth start of 2014.

He's 3-0 with a 3.76 earned run average as a starter and has never faced the Indians.

On Monday, Santana's home run proved to be the difference as the Indians grabbed a win in the opener. Michael Bourn had two hits and scored twice while Asdrubal Cabrera added a two-run home run for the Indians.

Trevor Bauer (2-3) nabbed the victory as he allowed three runs on eight hits with four walks and six strikeouts in 6 2/3 innings. Carlos Carrasco pitched the rest of the game for his first career save.

Chris Iannetta drove in a pair of runs for the Angels. Jered Weaver (7-6) came into the game 6-0 with a 1.64 earned run average in nine starts at Progressive Field, but he dropped this decision after giving up four runs on five hits and a walk in six innings.