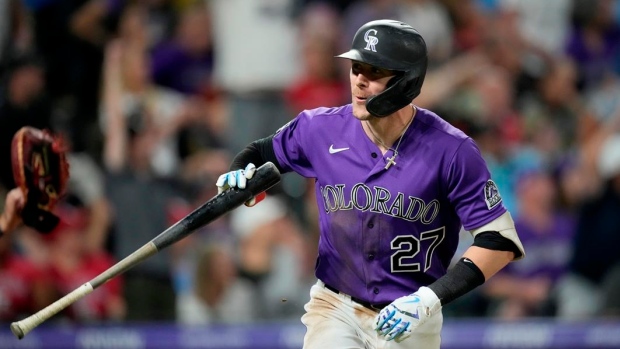 TORONTO — Seventy-eight days ago, the business of baseball shut down in the middle of free agency and it hasn’t been heard from since.

Toronto Blue Jays pitchers and catchers would’ve been scheduled to hit the field in Dunedin this week, but that’s not happening, and won’t until a new CBA is agreed to.

There are ominous signs that a deal may not be on the immediate horizon.

Whenever things do return to normal, there’s going to be a frenzied roster-building window that the Jays and GM Ross Atkins are sure to be a part of.

Getting Kevin Gausman signed to a lucrative multi-year pact to pair with Jose Berríos atop the rotation just prior to the lockout was a great start, but as a club billed as a serious World Series threat now there are holes that absolutely must be addressed.

Like last year around this time, it’s important to remember that every single need doesn’t have to be satisfied prior to the start of a marathon season that might just be a little bit shorter this year when all is said and done if things drag into March as many are predicting.

Waiting until trading season in July — like last year with some bullpen reinforcements and the Berríos blockbuster — could be in the cards once again.

With that being said, there are four items on the to-do list for the Jays front office that stand out above the rest.

Offensive impact at 2B or 3B

The current behind-the-scenes expectation around the game is that there could be about a seven-day window for off-season business to get done across the league prior to the start of spring training once the CBA is signed.

From a position player and lineup perspective, it’s all about the second base and third base spots for the Jays when the transactions start flowing again.

It was very clear that Marcus Semien was going to be one-and-done in a Jays uniform, and what a season it was for the middle infielder in his age-30 campaign.

With the outfield set for now, the catching depth chart full and some guys named Vladdy and Bo holding down first base and shortstop, respectively, the Jays will look to go about replacing Semien’s MVP-level production from the top of the order.

That will be just about impossible to do.

With the potential platoon of right-handed hitting Santiago Espinal and lefty Cavan Biggio already in-house, then Jays could look to add at either third or second.

Ideally, the Jays would love to find a way to replicate the Semien signing, finding a player whose market craters and is left seeking a one-year prove-it contract.

Kris Bryant and Trevor Story would fit that profile, while stars Jose Ramirez, Matt Chapman and Ketel Marte are the blockbuster trade candidates who will be available between the restart and the trade deadline.

The Espinal/Biggio platoon would profile a bit better at second base than the hot corner, but the mid-tier free-agent options like Jonathan Villar and Josh Harrison aren’t overly inspiring.

It will be compelling to see which way the Jays go, while also remembering that third base prospects Jordan Groshans and Orelvis Martinez and pushing up through the system.

It’s been a long time since the Jays were in possession of a rotation like this.

With a pair of electric and proven righties in Berríos and Gausman, a veteran lefty in Hyun Jin Ryu and the massive upside and impressive rookie consistency of Alek Manoah, the front four is exciting.

As of today, the fifth starter options consist of veteran righty Ross Stripling, who profiles better as a swingman and spot starter, and former top prospect Nate Pearson, who will have some sort of innings cap this year and is much more likely to end up in the bullpen down the stretch.

After that, it’s a group of unprovens like Thomas Hatch, Anthony Kay, Zach Logue and Bowden Francis providing depth.

The best starter left on the market after future Hall of Famer Clayton Kershaw is lefty Carlos Rodon, before the market gives way to names like Zack Greinke, Johnny Cueto, Michael Pineda and Drew Smyly.

Atkins could go a couple of different ways here.

A one-year deal for a Greinke-type would provide some quality back-of-the rotation innings for a decent price, but maybe a minor-league depth deal or two is the way to go if the remaining budget — the Jays are currently projected to run a payroll around $140 million, leaving potentially as much as $20-25 million to spend on the 2022 roster — is used elsewhere.

Don’t rule out a trade here, as well.

Prior to the lockout, the Jays, according to a source, were very interested in Cincinnati Reds starter Tyler Mahle.

The bullpen was the area of concern for much of last season and it’s easy to point to the numerous late-May and early-June meltdowns as the reason they missed the postseason by a game.

But the ‘pen was quietly a strength over the final two months and there’s a group of five quality arms that give the Jays a massive head start on where they were at this time last year.

You never really know with any reliever, but Jordan Romano, Tim Mayza, Adam Cimber, Trevor Richards and November free-agent signing Yimi Garcia give pitching coach Pete Walker and manager Charlie Montoyo a number of different looks to turn to in the late innings.

If you’re looking for where this year’s big swing at the trade deadline could happen, this is probably the area.

Pairing a proven high-leverage arm with Romano at the back end of the bullpen would be ideal.

Would the Jays consider Kenley Jansen for just that role coming out of the lockout? Maybe.

Joe Kelly and Collin McHugh make up the next tier of free agents left, while Craig Kimbrel is fully available on the trade market.

Two under-the-radar free-agent reclamation projects to consider are Trevor Rosenthal and Keone Kela, who are both recovering from injury but could make an impact over the summer.

If the Jays don’t make any major additions here heading into the season, it puts more pressure on names like Pearson, Ryan Borucki and Julian Merryweather to stay healthy and make an impact.

Figure out the situation at catcher

Something has to give with the Jays’ stacked catching depth chart.

It’s a good problem to have with the dearth of quality catchers around baseball, but the hard part is deciding who to keep and how to value them because they’re all so different.

Keeping all three worked out well down the stretch last season, but it’s not the ideal long-term setup.

The wrinkle in all of this is that top prospect Gabriel Moreno looks like the real deal, and he’s slated to start the season a phone call away at Triple-A, giving the veterans ahead of him maybe two or three months before the 22-year-old Venezuelan attempts to steal the job.

One of these non-Moreno catchers will be traded and the best bet might be selling high on Kirk as the club prioritizes defence behind the dish.