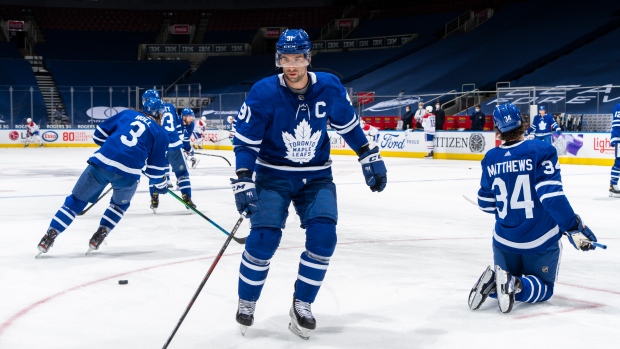 TSN Toronto Reporter Mark Masters reports on the Maple Leafs, who held a media availability on Wednesday ahead of Thursday’s Game 5 against the Montreal Canadiens at Scotiabank Arena.

John Tavares returned to the Leafs practice facility on Wednesday.

"John is here today re-acclimating himself to the group and getting back going," coach Sheldon Keefe revealed. "There are a lot of really positive things both in his recovery and having him around our group."

Despite being knocked out of the series against Montreal after sustaining a knee injury and concussion in Game 1, Tavares has continued to influence the Leafs.

"We get text messages from him before every game reminding us what we need to do out there and what our mindset needs to be like," said William Nylander. "He's been a huge support. He's been on FaceTime after the wins in the locker room. He's there every moment."

Tavares will be sidelined at least through June 3 due to the knee injury. There is no timeline for his return from the concussion and general manager Kyle Dubas said the team will be cautious in how they handle that.

"For him to communicate, reach out, and assure the guys he is doing well — because he has been doing very well — is a very good thing for our team," said Keefe. "He is the captain of the group so for him to still be showing those leadership qualities that he has at this time of year is really important."

Teammates will often rave about Nylander. They will talk about his smooth skating ability. They will highlight his vision and creativity. They will gush about his shot and urge him to use it more. But after Tuesday's win, in which Nylander scored yet again, we heard something different.

"He's really led the way," said veteran forward Jason Spezza. "He's showed a lot of determination. His board battles have been second to none. He's more vocal on the bench. You can tell he's really taken on a leadership role with John down. He's stepped up."

Nylander insists his play and approach hasn't been impacted by the absence of Tavares. So, what sparked the change?

"It's the losses in previous years," he said. "They hurt you when you lose so that's something I'm trying to not have happen this year."

Last year, Nylander struggled in Game 5 against the Columbus Blue Jackets. Asked to play centre, Nylander was on the ice for all three Jackets goals in the elimination game. He finished the series with only one even-strength goal. The takeaway?

"Just the small situations," he said. "Every little situation makes a difference at the end of the game."

Nylander has always possessed a certain swagger and self-belief, which has served him well. Now, his teammates are also benefitting.

"Will's not a guy that's short on confidence in any way," said Keefe, who also coached Nylander in the American Hockey League. "Having personal confidence is one thing, but having confidence within the team, within the team unit, is a whole other thing and that's where we've seen the growth. He recognizes the role that he has and the responsibility that comes with it."

William Nylander extended his goal streak to four games and moved within one of matching the @MapleLeafs franchise record for longest in the #StanleyCup Playoffs.#NHLStats: https://t.co/Yd22T7EVeU pic.twitter.com/IKYMuh3B4V

Nylander has been a dominant force against the Canadiens scoring in all four games, but also making the subtle plays necessary to win. He started the sequence leading to his goal on Tuesday night with a check on Tyler Toffoli behind the Leafs net.

"He understands the importance of these games and understands what he needs to do to take the next step in his evolution as a hockey player," observed linemate Alex Kerfoot. "He wants to be a great player. He is a great player. He's doing all the little things to help us win right now and that's what we need."

On Thursday night, the Leafs have a chance to clinch the franchise's first playoff series win since 2004.

"We know this is a hurdle we have to get over," acknowledged Keefe. "We don't put any of that on the players. We have a very small group of players that have been here for multiple years. This group of players I look at with its own identity — not attached to anything that has happened in the past. I think it is important inside of our walls that the guys don't wear any of those types of pressures."

The Leafs have never had a chance like this. The team is better than it has been in recent years and the opposition is weaker. Montreal owns the worst record of all 16 playoff teams. Toronto dominated the North Division in the regular season and has played well in building a 3-1 series lead against the Habs.

"As an organization, of course, we need to deliver for our fans," said Keefe. "We have given ourselves a great opportunity to do that. There is a reason why it has been this many years. It is because closing out a series is a very difficult thing to do. We respect that greatly. We respect our opponent. We know tomorrow night's game is going to be the hardest one in the series."

This Leafs team appears to be up to the challenge. There's a different feel after the organization brought in several veteran players in the off-season to supplement the core.

"The simple thing for me is just unity and camaraderie. This is a true team," said Keefe of the change. "It just goes to show the personalities that we have and how it is all coming together. They enjoy being around each other. I think it is something that is thrown around a lot across the league and all of that, but I really feel it this season."

Alex Galchenyuk made a beautiful no-look pass to set up Nylander's goal on Tuesday. He finished the night with three points against the team that picked him third overall in the 2012 draft. It must feel good to get some revenge, right?

"Not really, to be honest," he said. "To come into games and think about playing here in the past or any stuff like that is extra talk. [I'm] just trying to keep it pretty simple in my head."

Any old friends, though, on the other side?

"It's playoffs, man," the 27-year-old said. "You know what time it is right now. There's no friends. We'll leave that for later."

Galchenyuk has resurrected his NHL career in Toronto. After clearing waivers and being acquired by the Leafs in February, he reported to the AHL for the first time in his career and earned positive reviews over six games with the Marlies. Upon entering the Leafs lineup, Galchenyuk received consistent praise for his work ethic.

But then, after playing the final 26 games of the season, Galchenyuk was scratched in Game 1 of the playoffs as Riley Nash, a guy who had not played for the team previously, entered the mix.

After Tavares got hurt, Galchenyuk got a chance. He struggled in Game 2 and Game 3, failing to register a shot and taking a double minor for high sticking on Monday. Still, Galchenyuk kept grinding.

"A lot of credit goes to him just for his attitude," said Spezza. "He understands that we have a deep team. Even when he was out, he had a great attitude and he works at his game. He spends time after practice, spends time before practice and he's a guy that's just had a really determined effort."

Galchenyuk got rewarded on Tuesday.

"He just has a great passion for the game," said Keefe. "I think he's fit in very well and he’s earned the respect of his teammates through the attitude that he's brought and through the work ethic and how he's played on the ice, most importantly."

Carey Price robbed Spezza with an incredible stick save in Game 3. He stoned him again on a breakaway early in Game 4. The 37-year-old just kept on coming and eventually picked up Toronto's second goal on Tuesday night.

"He's probably the best goalie of our generation so it's just important that you don't get frustrated when saves get made," Spezza said. "Saves are going to be made at times. When you're getting chances it's usually a good sign. I expect him to make saves. You're not going to score every time. You just have to stay with it."

Price has performed well posting a .920 save percentage in the series but Jack Campbell, playing in his first Stanley Cup playoffs, has even better numbers with a .965 save percentage.

"He's giving them a chance to win every game," Campbell said of his counterpart. "I don't know if 'out-duelling' is the right word. I'm just trying to do my job for my team like he is for his team ... It's just been an honour to battle him and still got a long ways to go so got to be ready for next game."

Campbell has benefited from a strong defensive performance by the Leafs.

"We're doing pretty much everything really well defensively," the 29-year-old said. "Like, if I have a rebound or something, they're clearing it. They're on it. We're working hard [to get] back. Montreal's super fast, but they’re not getting too many rush chances right now."

"Soup's obviously made really timely saves for us," said Spezza. "That’s huge come playoff time. We're just trying to limit their rush chances. If you look at Game 1 they got a goal on a rush chance and it's important we take that away from them. When we do we're able to slowly gain territorial play and wear them down."

Even in the second period, with the long change, the Canadiens have been unable to generate much of anything. In fact, Toronto has owned the middle frame, outscoring Montreal 8-1.

"There's a lot more space on the ice because of the line changes and people generally have to leave structure to get off the ice, which changes it a little bit and that is an opening for us to really get going," Keefe said. "First and third periods are difficult this time of year, especially with structure generally in place. You've got to come through groups of five people quite often. Second period opens up a little bit and we look at that as a big opportunity for us to take hold of the game."

The Leafs will hold a morning skate on Thursday at Scotiabank Arena.