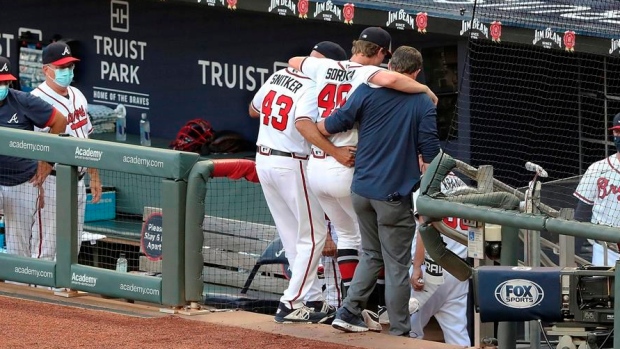 ATLANTA — Jacob deGrom's typically strong performance was overshadowed by a devastating injury to another of baseball's top pitchers.

Mike Soroka is done for the year.

DeGrom struck out a season-high 10 in six innings and the New York Mets snapped a five-game skid Monday night with a 7-2 victory over the Braves, who took a huge blow in the third inning when Soroka went down with a torn Achilles tendon.

“There’s no sugarcoating this night,” Atlanta slugger Freddie Freeman said. “It stinks. It really does.”

Soroka crumpled to the ground on a seemingly routine play, breaking toward first to cover the bag on a grounder to Freeman's right.

“When you lose, in my mind, one of the top pitching arms in this entire game for the whole season, it's pretty tough,” Freeman said.

It was also a tough night physically for the Mets. Robinson Canó had three RBIs before leaving the game himself — one of three New York infielders who went down with injuries.

None of them were nearly as serious as Soroka's.

Mets manager Luis Rojas said the steamy summer weather might have contributed to the injuries to Canó, Amed Rosario and Jeff McNeil.

All are day to day.

“With how the weather has been, this is one thing that we can’t take a chance to push guys just to stay out there,” Rojas said.

Wilson Ramos added a two-run homer for the Mets, who avoided a four-game sweep and ended Atlanta's five-game winning streak.

DeGrom (1-0) turned in another sterling effort. The two-time NL Cy Young Award winner has allowed just four earned runs in 17 innings over his first three starts of the shortened season. He threw 104 pitches, with his only real problems coming in the fifth after being staked to a 7-0 lead.

“I wasn’t able to throw my off-speed for strikes or where I wanted,” deGrom said. "I left a couple of balls over the middle. And that’s how they scored a couple of times. I was just frustrated and was having a hard time gripping the ball ... but the fortunate thing is we got the win.”

Any thought of another duel with Soroka (0-1), like the one they had on opening day, ended in the third when the Braves' young star crumbled to the infield grass after delivering a pitch to J.D. Davis.

When Davis grounded the ball toward first, Soroka broke in that direction to cover the bag if necessary — only to go down on his first step off the mound.

The right-hander yelled in obvious pain, got up and tried to walk gingerly for a couple of steps before again dropping to his knees. He couldn't put any weight on the leg as he was assisted to the clubhouse by a trainer and manager Brian Snitker.

“I heard him yell,” Freeman said. “It's just a terrible injury for somebody so young, so bright, so determined to be great at this game.”

It was a major setback for the Braves, two-time defending NL East champions. They have struggled to put together an effective rotation this season.

Soroka, who turns 23 on Tuesday, went 13-4 with a dazzling 2.68 ERA in 2019 to finish second in NL Rookie of the Year balloting and sixth for the Cy Young Award.

He allowed three hits, walked four and wound up being charged with four earned runs in 2 1/3 innings, the second-shortest outing of his career.

Mets: Rosario (left quad tightness) exited after grounding out to end the third. Rosario did not run hard out of the box and walked back to the dugout with a trainer. ... Canó's injury was diagnosed as left groin tightness. ... McNeil didn't even make it to the first pitch. He was scratched shortly before game time after experiencing tightness in his back while working in the batting cage.

Braves: 2B Ozzie Albies was back in the lineup after missing two of the previous three games with a sore right wrist. Albies said he first felt the injury about two weeks ago. “I just had to rest it,” he said. “But it's feeling better now.” ... LHP Will Smith continues to bounce back after a bout with the coronavirus. The reliever threw about 25 pitches in an indoor cage before the game, moving a step closer to being activated from the injured list.

Braves: LHP Max Fried (1-0, 2.31 ERA) makes his third start of the season as Atlanta begins a three-game series against the Blue Jays at Truist Park. RHP Matt Shoemaker (0-0, 1.50) gets the nod for Toronto.