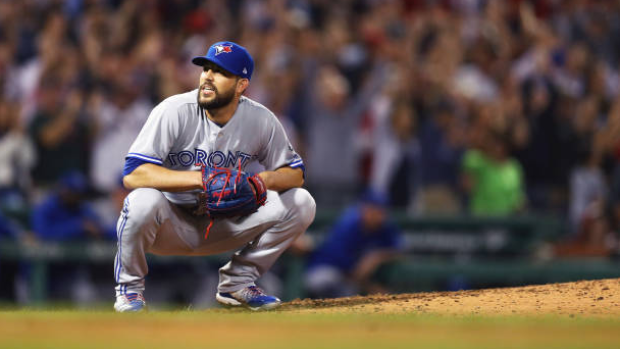 Pieced together with a group of veteran holdovers, a handful of unproven youngsters and an outside addition or two, the Toronto Blue Jays bullpen was never deep.

Now, with setup arms Ryan Tepera and John Axford nursing elbow injuries, the group can only be described as paper thin.

Being described in that fashion is never good. But when it’s March 21 and you’re a week away from the first official pitch of the season even being thrown, you have to wonder how capable this group is of getting through the season without some severely crooked numbers being hung and tired arms left in its wake.

Let’s start with what we know: Ken Giles is the closer, veteran right-hander Bud Norris, signed to a minor-league deal earlier this month, is the top setup option now, while 27-year-old lefty Tim Mayza has been lights out and looks set for a breakout campaign after being slowly broken in over the past two seasons.

After that? It’s a whole lot of uncertainty.

Tepera and Axford were supposed to slide into key high-leverage roles in the seventh and eighth innings, but now they’re both sidelined for what’s expected to be significant periods of time.

Axford, who’s on a minor-league pact that won’t have to be dealt with until he’s healthy, is dealing with a stress reaction in his right elbow and will be shut down for four weeks.

But the real concern is Tepera.

After two seasons of being worked hard, as well as a bout with elbow inflammation last summer, Tepera is off to see specialist Dr. David Altchek, an ominous sign that structural damage has not yet been ruled out.

The Blue Jays struggles over the past couple of seasons have overshadowed just how good the 31-year-old righty has been for this club, and he may have been even better had he not been asked to pitch as much as he was.

Time and time again, former manager John Gibbons called upon Tepera to get out of jams, running his appearance totals up to 73 in 2017, followed by 68 last season.

The Texan may have proven he doesn’t quite have the stuff for a ninth-inning role — he was handed the closer’s job last summer and quickly handed it right back, leaving him with a career 4.91 ERA in save situations — but the Jays front office and new manager Charlie Montoyo were counting on 70 or so innings out of Tepera in various leveraged spots this season.
That may be all out the window now, with no obvious solutions on hand.

Joe Biagini’s strong spring provides hope he can get back to his 2016 ways and put two failed years of attempting to convert back to the rotation behind him.

David Paulino is an intriguing 25-year-old power arm just now making the move to the bullpen after being developed as a starter by the Detroit Tigers and Houston Astros, but he’s far from a proven commodity.

One of the most fascinating stories in camp is whether 19-year-old Rule 5 pick Elvis Luciano would show enough to stick, and while the answer to that question may be a no after watching the kid allow 11 earned runs and walk seven batters over his first 6.2 spring innings, the Jays front office may now decide to continue the experiment into the regular season since the options are limited.

Sam Gaviglio, who has capitalized on his opportunities this spring with a 1.29 ERA across 14 innings, looks set to be the main beneficiary of these injuries and should break camp as the long man, a role that could prove to be both vital and busy early in the season.

Also in the mix are Danny Barnes, Javy Guerra, Justin Shafer, and the recently acquired Jason Adam, all of whom would have to be added to the 40-man roster in order to make the club.

There’s also depth the Blue Jays front office would prefer to keep stretched out as starters in Triple-A rather than limit them to bullpen depth at this point, so you can expect names like Trent Thornton, Thomas Pannone, Jacob Waguespack and Sean Reid-Foley to be last resorts.

From there, off-season free-agent addition David Phelps will help at some point, but he’s only now 12 months removed from Tommy John surgery and won’t be rushed.

Bullpen attrition is inevitable over the course of a long baseball season, but the current picture isn’t pretty and the calendar hasn’t even flipped to April.