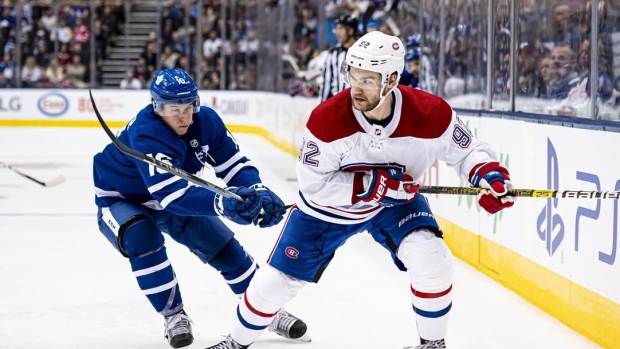 TSN Hockey Insider Pierre LeBrun and TSN Senior Hockey Reporter Frank Seravalli join host Gino Reda to discuss the 2020-21 Canadian division possibly being in jeopardy, whether or not it will be mandatory for players to get vaccinated once available and an update on a pair of two key restricted free agents?

What’s the latest on Canadian teams as the NHL looks to start its season?

We may have at least part of the answer as to why the NHL hasn’t finalized its start to the 2020-21 season yet.

Seravalli: We’ve reached a delicate stage in the Return to Play process. The NHL and its seven Canadian clubs have been going back and forth with the provincial health authorities trying to nail down protocols that work for all of the stakeholders involved. And the provincial health authorities have not signed off yet. They’ve run into some difficulties. These protocols have been changing by the hour and daily. So, moving forward, the NHL’s preference continues to be to open the season in all 31 buildings including all seven Canadian arenas. But what if that can’t happen? Well, they’d have to resort to some other alternatives. One could be playing the season in a hub city, or the other less desirable option would be to move all seven Canadian clubs south of the border for the 2020-21 season. Now, the NHL remains optimistic at this point that they can sort all of this out, but we’ll see where this goes because this is a significant development.

LeBrun: Frank, call me a cynic but it’s probably not the worst thing as far as a tactic goes for the NHL to have this out in the public domain because, as you say, it is a possibility for the seven Canadian teams to play south if they can’t figure this out with Canadian health authorities. But it also puts a little public pressure on the Canadian provincial governments as well, so let’s see how the next 24 to 48 hours play out. In the meantime, if the worst does come to pass and the Canadian teams have to play south, it goes without saying, but I’ll say it anyway, that a league source confirms the all-Canadian division would probably be no longer and that the NHL would have to look again at more realignment for the 31 teams. But again, let’s hope that the seven Canadian teams are playing at home.

As vaccines slowly become available and expect to be in wide circulation at some point next year, players are going to have a decision to make on whether or not to get vaccinated.

Seravalli: They do, and the NHLPA has made sure that is their choice to make. That vaccines will not be mandatory. They can be recommended to players to take by the NHL and their teams but it’s going to remain a choice for the players. This was a non-starter for the NHLPA in discussions, they realize how cautious players are with what’s entering their bodies. Moving forward, it’s going to be their choice whether they want to take it or not.

What about the remaining free agents?

After the usual busy first few days of the off-season, signings have fallen off a cliff. What’s going on there, particularly concerning a couple players in need of extensions?

LeBrun: Well two key RFAs – Pierre-Luc Dubois in Columbus and Mathew Barzal with the Islanders – those two guys need new deals. And, on the one hand with Dubois, his agent Pat Brisson, who was on our podcast this week, said that talks suddenly over the last little while here started to pick up with the season looking like it was going to return. I spoke with Blue Jackets’ general manager Jarmo Kekalainen on this day and he said it’s a priority to get Dubois signed before training camp started and he was confident he would do so. And certainly, it seems like there are a lot of positive vibes in that negotiation. Meanwhile, Barzal and the Islanders, the agent is veteran J.P. Barry, they’ve had constant communication between the two sides throughout all this, they’ve talked short-term, medium-term, long-term deals. Again, getting a positive vibe out of that negotiation and we’ll see where that goes.