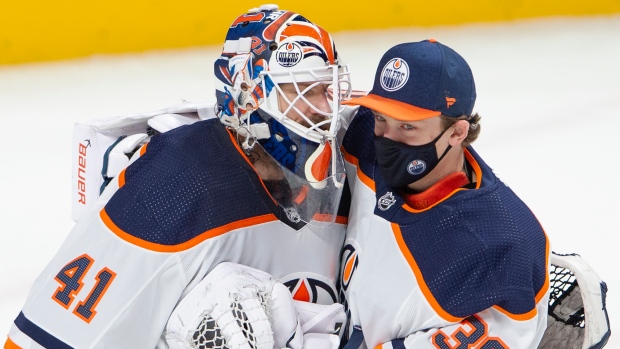 TSN Hockey Insiders Pierre LeBrun, Chris Johnston and Darren Dreger joined host Gino Reda to discuss the current goaltending market in the NHL, the impact of the Ontario government’s announcement on the Toronto Maple Leafs and Ottawa Senators, the future of the CHL/NHL Prospects game, and more.

What are the goaltending options for the Edmonton Oilers?

Pierre LeBrun: There are goalies available, but I don’t know if there’s a knight in shining armour for the Oilers. They are, according to sources, looking at all options across the NHL. For example, we’re told that they’ve kicked tires on [Columbus Blue Jackets goaltender] Joonas Korpisalo, who’s a pending unrestricted free agent at the end of the year.

They discussed internally about [Dallas Stars goaltender] Anton Khudobin, who cleared waivers last month. But I think where the Oilers lose interest on Khudobin is the fact that he’s got another year left on his deal at $3.33 million, that’s not to say they don’t go there but it’s less appealing.

The other Stars goalie who might be more interesting is Braden Holtby, who is a pending UFA at the end of the year. That’s key for Edmonton as he only makes $2 million this year. But the funny thing there is who the Oilers want may not be who the Stars want to trade if you read between the lines.

They’re looking at all options but right now the real question for them is, “Is there a serious upgrade on [Oilers’ goaltender] Mikko Koskinen? If not, why are we doing this?” It doesn’t mean they won’t do it but they sure are talking about it.

Darren Dreger: For a number of reasons, there’s lots of speculation surrounding [goaltender] Marc-Andre Fleury and the Chicago Blackhawks. He won’t be a fit in Edmonton, primarily for financial reasons, but Fleury was asked about trade possibilities, and he said, “I’m not thinking about that right now, I’m just trying to inch the Chicago Blackhawks closer to a playoff spot.”

But there will be a conversation between the veteran goaltender and his agent, Alan Walsh, and that will extend to the Blackhawks management. There’s also an agreement with the Blackhawks that Fleury isn’t going anywhere unless he wants to.

Again, pump the brakes here. We’re in the better part of two months away from the March 21 trade deadline. If in six weeks from now Fleury says that he wants to chase the Stanley Cup? Well, that’s a different story and there will be interest.

How will the new Ontario government announcements affect the Toronto Maple Leafs and the Ottawa Senators?

Chris Johnston: It’s safe to say that they weren’t well received by either the Leafs or the Senators, with the Ontario government coming out and saying that they can’t increase capacity to 50 per cent until Feb 21. But [what’s] interesting is that Toronto and Ottawa might approach this differently.

The Leafs have five home games scheduled in that window and they intend to go ahead and play those games. [This is] primarily because they don’t have any future games against the teams coming in, so it’s not a situation where they can be swapped out.

In Ottawa’s case they have 11 home games, more than 25 per cent of their home schedule, within that window. I think the Senators are going to want to weigh their options and have further conversations before committing to their course.

I should [also] mention that the National Hockey League is optimistic that these new regulations will allow the Heritage Classic outdoor game in Hamilton [between the Buffalo Sabres and the Maple Leafs] to go ahead on March 13.

Darren Dreger: Normally it [would be] scheduled for early February but they had to postpone for pandemic reasons. Now, just on the heels of [TSN Hockey Insider] Bob McKenzie’s mid-season ranking, I can tell you that the NHL Draft Combine and the NHL Draft aren’t even on the radar of the NHL.

No guarantee that it’s going to happen, of course it would involve all three leagues. But there’s talk of it perhaps of it being reinstated for late February and that could be a problem for the CHL.

Now that Kent Hughes is the new general manager of the Montreal Canadiens, what happens to his clients as a player representative?

Pierre LeBrun: Obviously, other agents across the NHL are licking their lips but I don’t think there’s going to be a free-for-all here.

Hughes had two notable UFA’s at the end of the year in [Boston Bruins forward] Patrice Bergeron and [Pittsburgh Penguins defenceman] Kristopher Letang. I spoke to Philippe Lecavalier on Thursday, who helped recruit Bergeron and Letang [to Quartexx Management], alongside Hughes. He said that that both Letang and Bergeron gave him a vote of confidence to take them on as the No. 1 agent.

Similar situation with Quartexx, with Paul Capizzano who is taking over Khudobin as the main agent, though he was already working on that file with Hughes.

Seems like business as usual for the Quartexx clients.