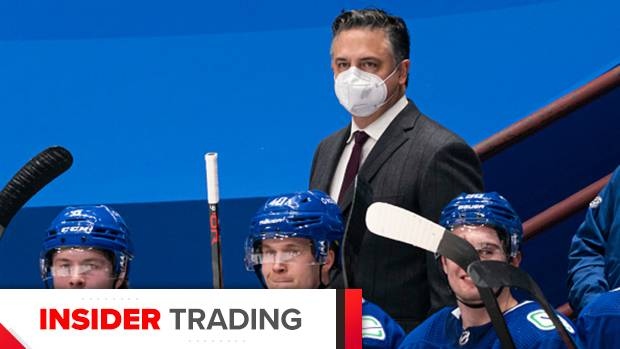 How close are the Canucks and head coach Travis Green to signing a contract extension? Is there reason for optimism for NHL participation in the Olympics? TSN Hockey Insiders Darren Dreger and Pierre LeBrun discuss this and more.

Ovechkin, Wilson reach out to Panarin

Darren Dreger: Tom Wilson and Alex Ovechkin of the Washington Capitals both reached out to the New York Rangers’ Artemi Panarin just to make sure he was OK after Monday’s collection of incidents. This isn’t unusual despite what some may think of Wilson. He did want to make sure that Panarin was OK, because that did not go the way that Wilson was hoping. Both guys checked in on Panarin — and it sounds like Panarin will indeed be fine. This is evidence that the villain of the week, Wilson, does in fact have a heart.

Will Canucks get Green signed?

Pierre LeBrun: Two weeks ago, I checked into the situation involving head coach Travis Green and the Vancouver Canucks and a source told me that there will be news on the Green contract front sooner rather than later. What I can tell you right now is that there isn’t a new offer on the table. Green for sure wants to stay and the Canucks ownership absolutely wants him back, so it’s going to come down to how much money is involved. Green makes $1 million a year, which is among the lower third of NHL head coaches. I think something around $2.5 million would get it done but I don’t know. We’ll see if it gets done.

Dreger: There’s been an on-going negotiation between the Carolina Hurricanes and their head coach Rod Brind'Amour. There’s more optimism coming from the Carolina Hurricanes. Recently the team thought it could get Brind'Amour extended prior to the start of the postseason, and even though the playoffs are right around the corner, Carolina’s management is still confident that they will get Brind'Amour extended in a week or less.

Dreger: My sense is that Rick Tocchet’s days with the Arizona Coyotes are probably over at the end of this season. There was a sense that perhaps there would be an opportunity to extend but my sources indicated that it’s more likely that Tocchet goes to the free market.

LeBrun: NHL deputy commissioner Bill Daly was on my podcast for The Athletic yesterday and he did not sound terribly positive about where things stood in regards to NHL participation in the next Olympics. This is partially because they continue to wait on IOC, IIHF and the NHLPA to come to the NHL to get a deal done. As Daly said, he understands that the IOC is pretty busy trying to figure out if the summer Olympics are going to get off without a hitch, but he said sometime this month there has to be a decision made on Olympic participation. I checked with the NHLPA on Thursday and they agree with Daly. Time is of the essence as this can’t wait forever. Yes, the players want to go the Olympics and it matters a lot to them, but they can’t go without a deal and the NHL has a schedule to put out soon for next season. The clock is ticking.

Laine takes responsibility for his play

Dreger: Patrik Laine obviously disappointed in the way this season has gone with the Columbus Blue Jackets but he’s taking responsibility for that. My sense is that Laine hopes to stay in Columbus at the conclusion of the season and continue working with their strength and conditioning staff before going back to Finland. Laine is a pending restricted free agent with a hefty qualifying offer. He wants to be better in time for next season. The belief is that Blue Jackets general manager Jarmo Kekalainen is going to try his best to acquire a top-line centre to help Laine in time for next year.