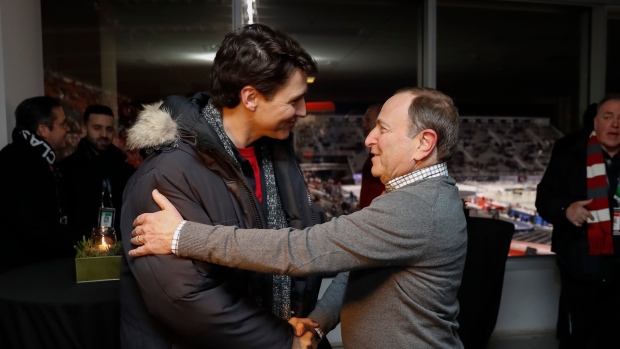 TSN Hockey Insiders Bob McKenzie, Darren Dreger and Pierre LeBrun joined host James Duthie remotely to discuss whether or not the NHL has reached out to Prime Minister Justin Trudeau regarding possible resumption of play, revenue streams for the league if it was to return without fans and potentially grim news for next season at the collegiate level.

Has Bettman spoken with Trudeau yet?

We know Gary Bettman and other commissioners from major sports leagues have spoken to U.S. President Donald Trump about getting sports back. But what about north of the border? 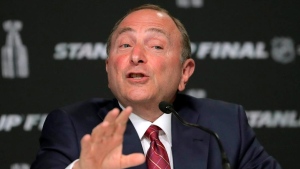 Dreger: Well that has been the plan for a while. He hasn’t directly spoken with Prime Minister Justin Trudeau but he has been in contact with the Prime Minister’s Office in the past week and it’s expected that Bettman will speak with the chief of staff in the very near future and then after that there is a plan to connect directly with Prime Minister Trudeau. Now among the topics of discussion, we certainly learned that after the conference call with the president of the United States, Donald Trump, available testing – especially for sports teams – is a topic of conversation and to some degree, concern. Now, there’s a number of developing options that could be available promoting some optimism at least within the National Hockey League. So we could see regular testing if or when hockey resumes. But at the end of the day, that’ll be up to the doctors and the medical authorities to determine.

If the NHL does come back to finish the 2019-20 season, it will in all likelihood be without fans in attendance. How does that impact the league financially? 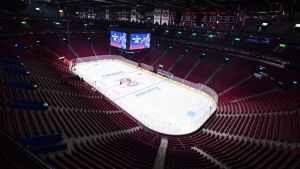 LeBrun: A question that I get a ton of late is why even finish the season if there are no fans in the building given that we always talk about how the NHL is a gate-driven league? And it’s a great question. I got an answer today. I mean, there is other revenue to be had here. In fact, both from a national media revenue perspective, the deals that the NHL has, also sponsorships, which are dedicated and paid for during the playoffs, all total to between $400 million to $500 million between those media deals, TV deals and sponsorship if the playoffs are actually played out. So that’s certainly not insignificant if you’re a player or an owner and you have a completion of the season. Now the idea of finishing the season, given what we’re living through, I think everyone on this panel has read their mentions over the past couple of weeks when we talk about all the different scenarios. So I put it to a Twitter poll because I think we’re all sensitive to what different people are thinking right now. And I asked specifically, if there’s July-August hockey with no fans in the building, are you in favour, yes or no? And the yes crowd was at 59 per cent, the no crowd at 41 per cent. Over 62,000 people responded to the poll over a 24-hour period. Which is to say it’s not unanimous in the sense that it’s going to please everyone. I think there are a lot of concerns about hockey this summer but still the majority of hockey fans are wanting it to happen.

What’s the latest with NCAA hockey?

Most people think of the NHL first when the topic of hockey resuming comes up, but what about at the collegiate level? This season was already cancelled. Is next season in trouble, too? 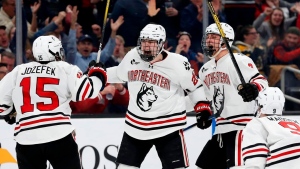 McKenzie: There’s lots of concern about college athletics in general in the United States and certainly that would be the case for the NCAA hockey fans for next season. Now what we’ve heard over the past week is that many U.S. colleges and universities are saying they may not anticipate opening up their campuses to [the] student body until 2021. There was a call Wednesday between the commissioners and heads of the various U.S. college football conferences who were on the line with Vice-President Mike Pence of the United States. And while the Trump administration is really pushing for as many sports to get back online as quickly as possible, the message these commissioners and heads of the conferences of U.S. college football gave to Pence was, listen, if our schools are closed, if there are no facilities available and there are no students on campus, then there is no college football season. And that would certainly extend to the NCAA hockey season. If the campuses are closed for the rest of 2020, then NCAA hockey won’t be happening for 2021 unless they figure out a way to get it done in 2021 properly.