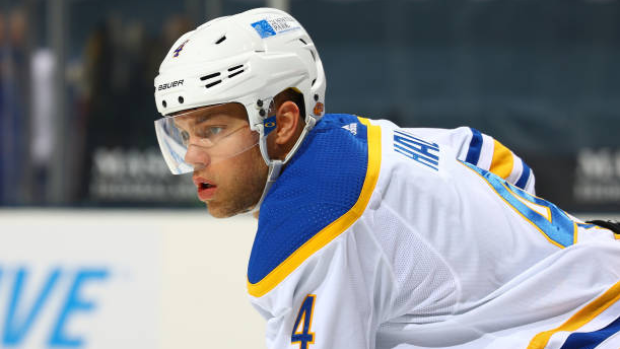 The TSN Hockey Insiders Darren Dreger, Pierre LeBrun and Frank Seravalli discuss the Flyers pondering adding some goaltending help ahead of the trade deadline, the Sabres mulling a variety of trade scenarios involving Taylor Hall, the Panthers looking to fill the void left by Aaron Ekblad, why Seattle is getting calls ahead of the deadline, and more.

How do the Philadelphia Flyers deal with their current struggles as the Trade Deadline approaches? 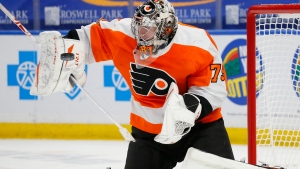 Pierre LeBrun: Yeah, it has been a real struggle for Carter Hart. It is my understanding that the Flyers’ front office is having that discussion internally. Do they go out and get goaltending help before the April 12 trade deadline and allow Carter Hart to have a bit of a reset and work on his game?

Brian Elliott’s been a pro, but he might need help. On the flip side, what does that do to Carter Hart if you do that? So, there are pros and cons to this and that is what I believe they are discussing.
The other thing is that the Flyers have to stay in the race. The next seven games before the deadline will be really important in terms of the Flyers wanting to add, no matter where it is, if they’re not playing better.

One name to retain if they do decide to add a goalie: Jonathan Bernier, I believe, [is] on the radar of the Flyers. He is a pending unrestricted free agent for Detroit.

Has there been any talk about the Sabres dealing more big names? 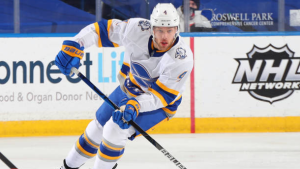 Darren Dreger: Specifically, we’re looking at Taylor Hall. I can tell you this. The agent for Taylor Hall, Darren Ferris, spoke with Kevyn Adams, the general manager for the Buffalo Sabres, on Monday. Obviously, they talked about a variety of trade scenarios that might be directed at Taylor Hall. There are some that have some interest in a trade and sign.

Kevyn Adams is wrestling on what the return should look like and as you get closer to the April 12 trade deadline, he becomes less of a cap hit so maybe there’s some upside in that. Maybe the price stays at what the ask might be at this stage.

As for the captain, Jack Eichel, he continues to go through treatment and is seeing a specialist. The expectation is that he could have imaging on his injury as early as next week and then the Sabres and Eichel will have a better understanding of his progress at that point.

How do the Florida Panthers fill the hole left by Aaron Ekblad’s injury? 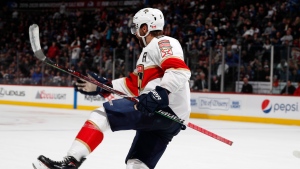 Frank Seravalli: As you might imagine, Bill Zito, their GM, his phone was ringing from 30 other GMs this week, offering a life raft that may or may not be disguised as an anchor.

Bill Zito is turning over every stone at this point. He is looking at all of his options that are on the table. Some suspects that are on out Tradebait board. Some guys that may be more hockey deals. Maybe even a waiver claim in the form of Shayne Gostisbehere. He is considering everything that’s out there knowing that: 1) He can’t replace Aaron Ekblad and 2) that he has limited currency to do so.

He is not interested in trading picks and/or prospects so he is going to have to do some searching in order to try and fill the void for Aaron Ekblad.

How do the Seattle Kraken factor into this year’s Trade Deadline? 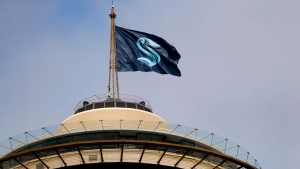 LeBrun: Ron Francis, for a guy that doesn’t have any players to put out there himself, is getting more and more calls, from what I’m being told, from teams around the league who are trying to feel him out and say: “Listen, if I make this trade, what would it take from you, that I don’t lose this fourth defenceman, for example.” And those are the types of conversations that teams are having with Ron Francis. And what I’m told is the price is pretty high. In some cases, it’s a first and a prospect is what Ron Francis is saying. That’s scaring off teams from trading for another player.

Remember, at the trade deadline in 2017, there was an “understanding” between Pittsburgh and Vegas on Marc-Andre Fleury. It didn’t come out that day, it came out in June. But that day, and Jim Rutherford conforms this, the understanding was that Fleury was going to be taken in the expansion draft. Pittsburgh was also going to send a second-round pick.

George McPhee and Jim Rutherford had a verbal agreement. Nothing official. Seattle is allowed to do that leading up to the deadline if it wants. But of course, it also doesn’t have to, so it adds a bit of intrigue.

How will the Vancouver Canucks handle their upcoming RFA’s? 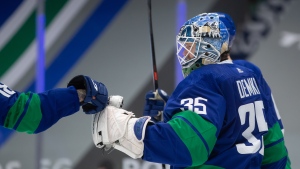 Seravalli: Yeah, and they got to work on their six-day break, starting with Thatcher Demko, engaging in what I would call “substantive” discussions on what an extension might look like. I don’t think they’re close but the timing of how Jim Benning puts the pieces together in this puzzle with both Elias Pettersson and Quinn Hughes, also as pending RFA’s, will be interesting to see.
It might help to get Demko done first, knowing what you have left to spend on those two guys.

Dreger: Speaking of free agents, it sounds like there’s progress being made on unrestricted free agent Tanner Pearson. I know that the Canucks spoke with Pearson’s agent, Joe Resnick. It’s not done yet, but the belief is that they are making progress. A lot of work to get done but both sides are optimistic.