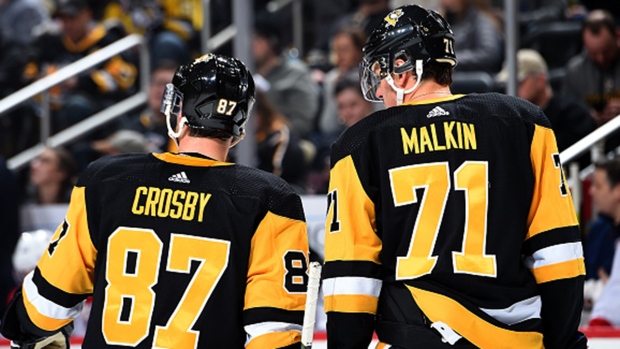 Will Pittsburgh’s long-term future include Sidney Crosby, Evgeni Malkin and Kris Letang? As the Pens’ GM search begins, how is the job viewed by its candidates? What does agent Pat Brisson have to say regarding Blue Jackets coach John Tortorella? More from Darren Dreger, Pierre LeBrun and Frank Seravalli.

What’s on the horizon in the Steel City?

With Jim Rutherford’s sudden departure as general manager earlier this week, is that just the start of big changes on the way for the Penguins?

Dreger: Well I think we have to see how the rest of the season goes. If the Penguins don’t qualify for the playoffs or they don’t do well in the playoffs, I think there is the potential for a seismic shift. If new management comes on board and says look we have to embrace a renovation here, the Penguins as an organization owe it to Sidney Crosby, Evgeni Malkin and to some degree, Kris Letang, to have a conversation and say this is the direction that we’re going in. Now, Malkin has one more year after this season remaining on his contract, but do those players, especially Sidney Crosby, want to chase a Stanley Cup elsewhere, or is retiring as a Pittsburgh Penguin equally important? The direction of the club of the next two years is going to determine how that discussion goes as early as this summer. But, imagine if those names were in play at some point in the near future?

What about in the interim?

For the now, what about replacing Rutherford? Is that search already well underway?

LeBrun: Yeah, a lot has transpired in the last 24 hours after that stunning resignation from Jim Rutherford. Dave Morehouse, the CEO of the Penguins, is really in charge of this by himself along with part-owner Mario Lemieux taking a number of calls in that day since that resignation. And believe me, there is a ton of interest of his position. How much? As of late Thursday afternoon, 20 different candidates had expressed and reached out interest to the Penguins for that job. Some on their own directly, others have other people doing it on their behalf. Some of the names on the radar for the Penguins include Jason Botterill, Chris Drury, Ron Hextall, Mark Hunter, Tom Fitzgerald – who was just a GM in New Jersey – Peter Chiarelli, Scott Mellanby, Mike Gillis, Laurence Gillman, John Ferguson Jr., Mike Futa. And again, as I said, including others. Now, Patrik Allvin, the interim GM, will also be a candidate. In fact, he’s getting the first interview. While the Penguins are going to talk to a lot of people, they’re going to get to their shortlist in a hurry and I’m told they want to have a GM in place within two to three weeks from now.

Seravalli: I think the big question is how is this Pittsburgh Penguins’ opening viewed around the league? I think the answer is it’s a tricky one. Whichever candidate gets this job, they’re knowing that yes, they’re handing the keys to a franchise with some special players in Sidney Crosby and Evgeni Malkin. But Dregs, for the reasons that you mentioned in addition to the tightrope that they’re going to have to walk as the next GM. Balancing the win-now mandate that David Morehouse mentioned earlier this week with the pain that they know will ultimately be coming. It’s going to inherently present a challenge for whoever’s tenure if they would like to remain in that chair for a long period of time balancing those two things. And so, it will be interesting to see how that sorts itself out. But I think there are a number of candidates that are a little bit leery thinking that this might not be the best optimum opportunity for someone to get back in that chair.

The fallout in Columbus

We’ve heard a lot from Blue Jackets head coach John Tortorella since the Pierre-Luc Dubois trade. What does his agent, Pat Brisson, have to say about that?

Dreger: Yeah, he’s heard enough. No question about that. Including a national interview on Wednesday where John Tortorella revisited his time with Pierre-Luc Dubois including some of the conflict around that road as well.

Pat Brisson telling TSN “From Day 1 of camp, John Tortorella wanted to expose Pierre-Luc Dubois. This included going on radio the second week, which made it more difficult for GM Jarmo Kekalainen to do his job. Now he continues to use different media platforms trying to justify his position. I have not heard Paul Maurice once say anything about a trade request from both Laine or Roslovic. This could have been operation submarine but, ah well, Torts wasn’t able to help himself.”

So, five days and counting after the trade between Winnipeg and Columbus and fair to say Pat Brisson has heard enough.