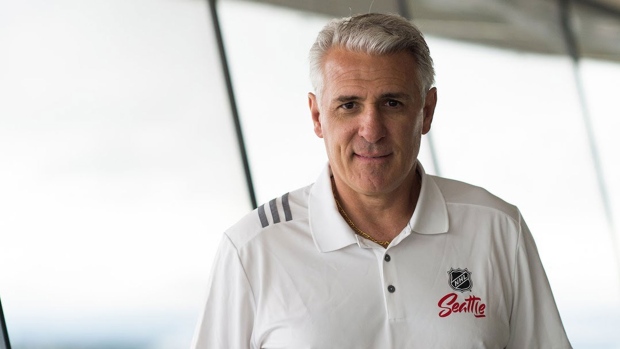 TSN Hockey Insider Darren Dreger joins Cory Woron to discuss when Seattle Kraken GM Ron Francis will turn his attention to hiring a head coach and a coaching staff, and if the franchise could benefit from the $81.5 million salary cap.

When will Seattle Kraken general manager Ron Francis look into hiring a head coach and a coaching staff?

Darren Dreger: Well, I can tell you that Ron Francis believes, and he still has time on his side and he's in no rush, he hasn't been in a rush for quite some time. Obviously, there's been some complications introduced by COVID-19, but the Seattle Kraken intend on taking the time that they have to make the right selection and that will mean the rest of the 2019-20 season. See what happens in the 24-team tournament. See if there's any coaches changes that they come out of that from both a head coaching perspective and an assistant coaching stand point as well. Obviously, there's been ample speculation around Gerard Gallant, formerly of the Vegas Golden Knights, essentially since he's been let go by the Vegas Golden Knights. So that remains consistent. I think it's safe to call him in the mix, but the process hasn't kicked into high gear just yet.

With the recent CBA extension and the flat cap of $81.5 million, is the Seattle franchise poised to take advantage of some of the tough decisions that teams around the NHL are going to have to make?

Dreger: I do and there are a number of general managers around the National Hockey League that would agree with that assessment. Especially with that flat cap of $81.5M with the reality and belief that it's not likely going to rise rapidly after the 2020-21 season. So there could be teams that are up against the cap or who have to think boldly that look at a high earning player and say 'look, this guy is a quality individual, are you interested? Perhaps, we're interested in sweetening it to make sure you're interested.' And then you got arbitration cases and that fact there is a belief that some clubs could walk away from qualifying offers, exposing some pretty good players. So, Ron Francis might be in a great position.