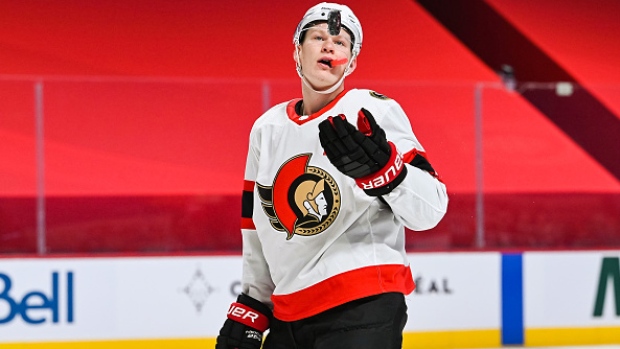 With Brady Tkachuk and the Ottawa Senators finally ending their stalemate, the TSN Hockey insiders break down Tkachuk's contract and the structure that led to both sides agreeing to get it done. As well, the insiders talk about Shea Weber's injury status, the length of long lists required for the Olympics and more.

Money didn't seem to be the obstacle in the Brady Tkachuk contract, it was always structure. So why does this structure work for Tkachuk and the Senators?

Chris Johnson: Well structure, especially on the long-term contract, was something that had to be worked through. And I think for Brady Tkachuk, he was able to maximize his take-home pay with the way this contract ultimately got completed. He didn't get any signing bonus money which is something every player would want if you could, but he did manage to have, strategically, his three highest-earning years fall in the middle portion of this contract. That is the years the escrow will be capped in the NHL at six per cent. And the reason that's significant is because if one of those $10.5 million payments had come this season, and usually guys want that money up front, he would have to had pay an extra $1 million this year in escrow compared to what he'll have to pay a few years down the road and that is something that worked out well for him. As Darren Dreger reported earlier today, it was a meeting this week in Belleville that ultimately broke the stalemate here and got them towards the deal that was completed on Thursday morning.

What are the developments on the Montreal Canadiens' efforts to get Shea Weber on the LTIR?

Pierre LeBrun: On Wednesday, the Montreal Canadiens officially filed an LTI letter regarding Shea Weber and what they got word on Thursday was that the league, at this point, is OK with it. I reached out to NHL Deputy Commissioner Bill Daly myself to get his view on Shea Weber being allowed to be on LTI. And his quote: "We are not currently challenging that Shea Weber satisfied the CBA requirements necessary to qualify for LTI." I'm going to read between the lines here. He said "currently." And so my point on that would be that this isn't totally over. That the league will continue to monitor Weber's health and his injuries. The reason for that is of course he played the very last game of the playoffs. He was a warrior. He played more than 20 minutes a night, but certainly when you talk to people close to him, you know that he is absolutely beat up. This is legit that he can't play hockey right now. And for the Habs, it's huge because let me put it very simple: when Carey Price comes back, they have to have Shea Weber on LTI in order to be able to activate Carey Price and his salary. So, this is a big ruling from the NHL.

A lot of NHL executive eyes were on the Rangers and the Capitals game Wednesday night, and not just because of Wayne Gretzky and Charles Barkley on TNT.

Darren Dreger: That was apart of it though, right? I mean, it's a big stage, a huge U.S. audience. But, you're right, hockey operations officiating the Department of Player Safety, even the commissioner's office, all involved in the pre-game discussions as to how they needed this game to play out. Now, George Parros, head of the Department of Player Safety, dealt with both coaches. Colin Campbell, hockey operations, talked to the managers. Stephen Walkom briefed the veteran officiating crew and it's all because of that, right? That was in May and that was Tom Wilson throwing down Artemi Panarin. Ryan Reaves is now the sheriff of the New York Rangers and they just didn't want anything to come back in the fashion it did in May and I would say it should be case closed.

The 2020 Hall of Fame class will finally get inducted...

Johnson: The long wait will be over. The Hockey Hall of Fame does intend and has approval from the provincial government to go ahead on Nov. 15 with the induction ceremony. Of course, the pandemic delayed that a year, they didn't actually have a '20-21 class. So this is the 2020 class and the Hall right now is still working with government officials to see exactly how many people will be in the building at Meridian Hall. But good news for them if they have the ceremony.

LeBrun: Meanwhile, on the Olympic front, countries participating in the Beijing tournament have until Friday to submit their long list. Now the numbers of players on that long list has shifted a few times. Originally, the agreement was for 47 NHL players to be the max on that list. Now it's 50 skaters and five goalies, so 55 max. Team Canada's has already made its decision, but on top of that there all unlimited players or non-NHLers that can be on that long list, in case of course NHL players don't go to Beijing.

Dreger: We had one or what appeared to be a kicked-in goal earlier this week as the Seattle Kraken made their debut in the National Hockey League regular season. Game-winning goal scored by Vegas Golden Knights forward Chandler Stephenson. Was it kicked in? It appeared to be kicked in, but you're never going to get consensus. What I know is that a number of managers were polled on this again. No clear cut answer, but without question Pierre, CJ and I will be talking about this the next general managers' meeting because it will be revisited for you, James.