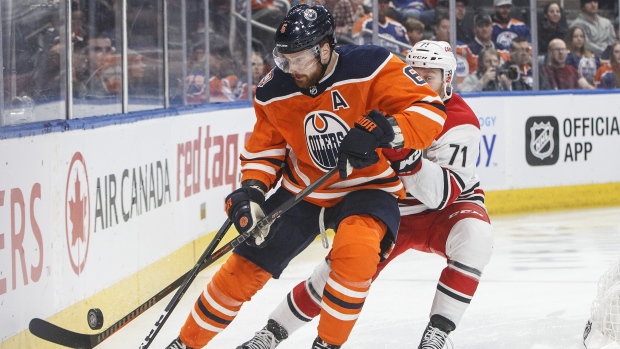 TSN Hockey Insiders Bob McKenzie, Pierre LeBrun and Darren Dreger join host Gino Reda to discuss how the Edmonton Oilers will adjust without Adam Larsson over the next six weeks.

A huge blow to the Edmonton Oilers on opening night. Yes, they won. But, they lost Adam Larsson for six-to-eight weeks. Bob, what do the Oilers do from here? Can they plug that hole internally or do they have to look outside the organization? 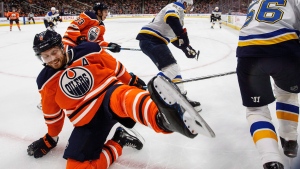 McKenzie: I don’t think they are necessarily philosophically opposed to going outside the organization. But the practical reality is there’s just not that type of defenceman available. Adam Larsson logs huge minutes for the Edmonton Oilers on that shutdown pair with Darnell Nurse. There’s nothing like that available on waivers or in trade. I mean, Thomas Hickey of the New York Islanders, for example, has been on waivers. He’s available in trade. But he’s not a top-pairing shutdown defenceman and he’s got a three-year contract at over $2 million a year that could be an albatross once Larsson comes back to the lineup. Right now the plan is just to try and ride out the storm. Bring in Kris Russell up from the third pair, put him [into] Larsson’s spot with Nurse. Continue to have the second pair that you planned on having with (Oscar) Klefbom and Ethan Bear and away you go. 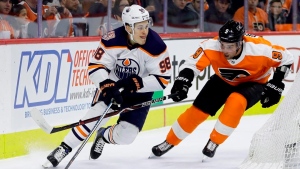 Dreger: Well, it’s the old cliché, I mean, general managers are always open for business and (Ken) Holland is certainly in that position as well. A bit of an update on Jesse Puljujarvi, who we understand is playing well in Finland and that’s caught the attention of at least a few NHL clubs who have expressed interest [in] Puljujarvi in the last week. There’s nothing doable from Edmonton’s perspective, but it is interesting to say the least. Something could develop in the weeks ahead, if not then Edmonton is willing to stand pat. 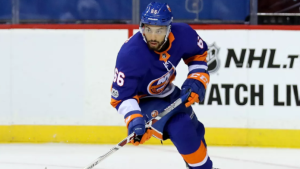 Dreger: Meanwhile, interesting development with the New York Islanders and their prospect, Josh Ho-Sang. Josh Ho-Sang clearly wants a fresh start somewhere else. He wants to hit the reset button on his career. It sounds like he is literally waiting for a trade to come his way. He’s not opposed to playing in the American Hockey League, starting in the AHL with a new team. But, right now that is all in the hands of general manager Lou Lamoriello.

The RFA watch this summer was a lot of fun for us to watch from the outside. But for teams and players themselves, maybe not so much fun. Now let’s look at the RFA class which are set to become restricted free agents next year. Samuel Girard got things going in the summer, then Clayton Keller, Thomas Chabot and most recently Alex DeBrincat. Are we seeing a trend, Pierre? 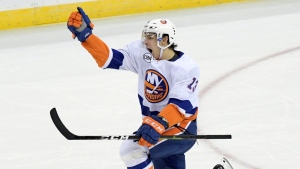 LeBrun: It is certainly, perhaps, the start of a trend. It’s interesting. When I’m talking to teams around the league, they don’t really want to be involved in what has just transpired on September 29 with all of the drama involving (Brayden) Point  and (Mitch) Marner and (Matthew) Tkachuk and (Mikko) Rantanen, etc. And so there are teams trying to be aggressive. Chicago did it with DeBrincat. Now what? There are still some big names that are set to come out of entry-level (contracts) in 2020 and it starts with Matthew Barzal of the New York Islanders who really will be the highest-paid player in this group, especially if it’s on a long-term deal. Now if you are J.P. Barry, the agent, I think you look at Mitch Marner and Auston Matthews, perhaps, as some contracts that you would like to at least get into the conversation. If you are Lou Lamoriello, I think you prefer the Mikko Rantanen deal. Here’s what I do know. Both sides are open, I think, to start that dialogue in the fall. Also, Pierre-Luc Dubois, so much pressure on Columbus after those off-season defections to get this core franchise centre signed. I’m told that agent Pat Brisson is receptive to the idea of sitting down at some point in the fall and getting the process started. I think the Jackets are going to come early with a big number. I should mention quickly, Victor Mete, his agent Darren Ferris, did speak to the Habs on the eve of training camp. (It’s) just preliminary, I don’t think he’s going to sign during the season. He could, but at this point I think it’s one of those things that is going to wait. 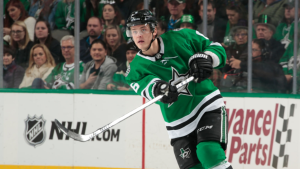 McKenzie: There is still a lonely RFA on the sideline trying to get back into the National Hockey League right now and that of course is Julius Honka of the Dallas Stars. Fourteenth overall pick in the 2014 NHL Draft. But he’s not coming out of (an) entry-level (contract). He’s played a full three years in the American (Hockey) League. He’s played 80-plus NHL games. The issue with him isn’t money. It’s not a financial dispute with the Dallas Stars. When you’ve got (John) Klingberg and you’ve got (Miro) Heiskanen, and you’re a puck-moving, sub-six-foot puck-moving defenceman, you’ve kind of lost your way in the Dallas organization. He wants an opportunity and a fresh start. Teams are talking to general manager Jim Nill of the Dallas Stars about a trade. It’s not a question of if he’ll be traded, but when he’ll be traded. And when he does, it’ll probably be for a draft pick. And it could happen in the days, if not weeks ahead as teams start to see which kids or injuries pop up in their own particular situation.

As we are into the start of the NHL regular season now, we start to see, and we’re reminded of, some of the rule changes. And we saw a good reminder of that with Connor McDavid on opening night for the Edmonton Oilers. 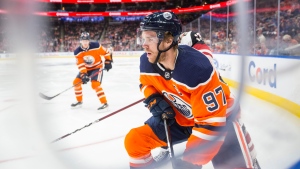 Dreger: I mean, it was applied, and it was executed in the game with the Edmonton Oilers and the Vancouver Canucks last night. Now, McDavid loses his helmet in a puck battle in the defensive zone. Now, the ref is communicating with him telling him to put it back on. You can see, he struggles there low and behold, the shot from the point by Alex Edler goes through.  The Vancouver Canucks score. But the Oilers are OK with it. Obviously, they’d prefer the puck not go in the net. They don’t blame McDavid for it. But they understand the rule and they support how it was handled by the league.