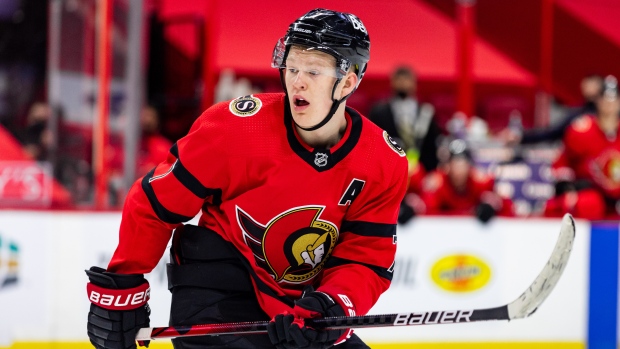 Are the Ottawa Senators any closer to signing Brady Tkachuk?

Chris Johnston: They certainly aren’t any closer and when I made my debut [on the TSN Hockey panel) last week I wouldn’t even say that much because there really hasn’t been that much progress on an extension in recent days. In fact, I’m getting the sense that Ottawa is comfortable and prepared to start the regular season without Tkachuk signed. Team sources say they can reach the salary cap floor even without him under contract to start the year. So, the Senators aren’t feeling any pressure to get this deal done by Monday’s 5 p.m. EST deadline when all teams must be cap compliant. At this stage in time, the Senators remain focused on a long-term deal for Tkachuk, while I believe his camp would prefer something shorter.

Darren Dreger: Both the Ottawa Senators and the Toronto Maple Leafs are still waiting for the call to come from the provincial government. They are very hopeful that very soon they will be able to expand capacity beyond 50 per cent. But to date, that call hasn’t come, and the reality is it’s an ongoing situation where the health authorities remain, as they should be, in control of the process. Now most are hopeful and remain patient from the Senators and Maple Leaf side. Some are getting frustrated though, especially the fan bases including the season-ticket holders.

Some early names to watch for the Trade Bait Board

Pierre LeBrun: Tomas Hertl would be a big name and it’s pretty rare for a centre of that calibre to move in season. What’s going on is that he’s entering the final year of his contract where he’ll be an unrestricted free agent on July 13th. The Sharks would have loved to have extended him this past summer, but my sense was Hertl just wasn’t ready to enter that type of conversation. So where does this go? If the Sharks are out of a playoff spot come March 21st trade deadline and Hertl doesn’t have a change of heart, I think that’s a guy that could be in play. A lot of teams are keeping an eye on that.

Darren Dreger: I think we can be firm that Phil Kessel’s name will be on that Trade Bait Board. Kessel is in the final year of his contract, and we know that Bill Armstrong and the Coyotes have defined the direction that they’re going in and that will not include Kessel. He wants a fresh start, and he wants to earn a new contract somewhere in the National Hockey League. He’s got some no-trade protection and he wants to go to a competitive, if not a contending team. He’s got the big cap-hit, but the salary is only one million dollars. So, if you have an injury or a team that is struggling offensively, he could be a fit later in the season.

Pierre LeBrun: A name that I think is staying put for the rest of his career is [Alexander] Sasha Barkov in Florida. I’m told there have been a lot of talks in the past few weeks about a long-term extension for the superstar centre who won a Selke Trophy last season. Now he’s a UFA at the end of the year, he’s 26-years-old, could you imagine the reaction from other teams if he hit the market next summer? I don’t think it’s happening. I think if they can push this over the finish line you can see an announcement within the next few weeks in Florida.

Chris Johnston: It’s interesting because next Friday there’s a deadline for the long list of Olympic players and Hockey Canada still must consider guys playing in Europe and maybe junior age players just in the event [NHL players don’t go]. The NHL and the National Hockey League Players’ Association has until January where they can pull the plug on going over to the Olympics. In case that happens, Hockey Canada’s quietly working behind the scenes on its non-NHL plans. Hopefully it doesn’t go that way, but we could see some different faces in Team Canada jerseys.