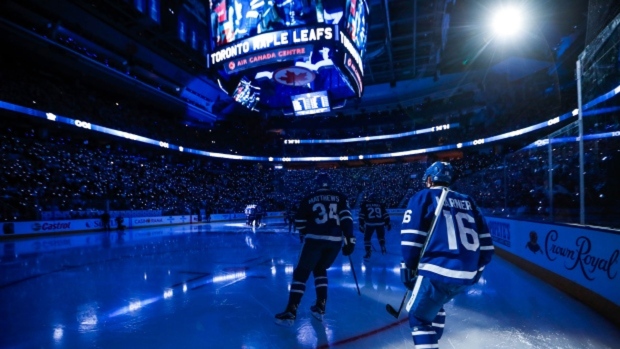 The lone TSN Hockey Insider is Pierre LeBrun and he joins James Duthie to discuss the six cities that are still in the running to be one of the hosts for the NHL's return. He also has details on MLSE resubmitting their hub city bid for Toronto and how the league plans to handle outbreaks before players get into "the bubble."

James Duthie: We know now that the NHL has got its short list down to a shorter list.

Pierre LeBrun: We reported over the weekend that the league had focused its list down from 10 to six. And now we know officially the four that are out...Minnesota and Columbus were contacted on Monday and now on Tuesday, Pittsburgh and Dallas have been told they are out, leaving the six of Vegas, Vancouver, Edmonton, Toronto, Chicago and L.A. Now, where does that leave Toronto in all this? They seem to be on the outside looking in when it comes to its Canadian cousins out West. One thing that Toronto did through MLSE is they resubmitted, James, their bid over the weekend. They've gone from sort of a downtown core bubble to in fact introducing the idea of a 40-acre campus like bubble on the CNE grounds where they would have access to BMO Field and the Coca-Cola Coliseum where the Marlies play, to the Raptors practice facility to the Hotel X that has 400 rooms, built a couple years ago. And within those grounds willing to build on that whether it comes to food trucks or an outside movie theatre. So, MLSE is trying to get Toronto sort of back on the minds of the NHLPA and the NHL. The question is, James, is it to late? Because there does seem to be momentum for the bids in Vancouver, Edmonton and certainly Vegas. And again, Chicago and L.A. have not been counted out just yet.

Duthie: How concerned is the league and the Players' Association about getting to those hub cities after it was announced 11 players tested positive for COVID-19 last week?

LeBrun: Well, what's interesting James is all along we've been asking a question, what's going to happen if there are positive tests when the tournament actually begins in August. I wonder if we've been asking the wrong question or the least important question because here's the thing. Once they get to the tournament, they're in the bubble in those two hub cities. It will be hard to get in and out if you're not supposed to be there. There will be massive testing, but what happens between today and about July 22 when is about the time teams will start heading to those bubbles in the hub cities. There is no bubble at training camp in Phase 3 and we know there's no bubble right during Phase 2 where we had those positive tests last week. That's really the greater level of concern is getting through the next month. And listen, I spoke to a league source about it, especially in terms of training camp, where players at the end of the day will go back home. Are they going to the grocery store? To the restaurant? You can't control where they are during training camp and the answer was this: education and player buy-in will be essential and necessary, according to this league source. And I can tell you that's a sentiment shared at the NHLPA as well. Everyone has to know that there's not a lot you can do until you get to the bubble. Will they get there? We'll see.