Insider Trading: Eichel to undergo neck surgery; Hoping to be ready for next season

How will the current delays in the NHL and different COVID-19 variants in Europe affect the IIHF Men's World Hockey Championship? What's the latest on Team Canada for the Olympics? How does the NHL feel about the new trend of double salary retention trades? TSN Hockey Insiders Darren Dreger and Pierre LeBrun bring you all of that and more.

Will the IIHF World Championship in Latvia go ahead as scheduled? 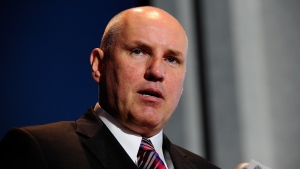 Darren Dreger: Well, that's the plan. It's still on schedule to go ahead. What they don't know is what the men's worlds [is] going to look like with the variant concerns that continue to develop across the world.

The IIHF had a call earlier today to talk about that and some of the other international events. There's a strong sense they can play the men's worlds in a bubble. They're going to make that determination, I would say within the next two to three weeks. Then you've got the ongoing NHL delays that are also a concern for the men's worlds.

Pierre LeBrun: In the meantime, the Canadian Olympic men's brain trust continues to plan ahead for Beijing until they're told not to. They've been meeting in virtual calls every dozen or so games this season. The long list of players that Doug Armstrong and his staff began the season with is down about 20 per cent since then as they continue to cut away at that list.

What they want to do is go from a long list to a medium list at the end of the playoffs so that if there is an orientation camp or some kind of get-together before next season, and for the Olympic preparation, that it's a manageable number.

Certainly at some point early next season the idea is to get it down to a shortlist where there are only three or four roster decisions to be had. At that point, the plan would be for the management staff to bring in the coaching staff, which has yet to be named, to help make those final three or four decisions.

In terms of the Olympic camps, it's still not decided whether there will be any. That's an NHLPA decision in conjunction with the league and that decision has not been taken yet.


Buffalo Sabres' Jack Eichel is out for the rest of the season with a herniated disk in his neck. Will he be ready for next season? 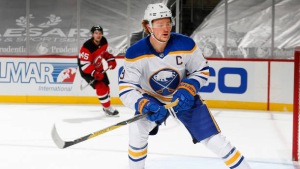 Eichel wants to deal with this issue. He doesn't want to wait for three, maybe six months, to see if it heals on its own. He wants to fix it now so that he's good to go for the start of training camp.

One of the trends at the trade deadline was double salary retention with a third team involved in trades. How does the league feel about these trades? 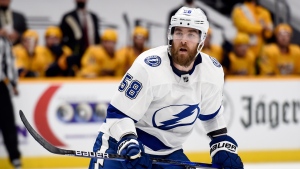 LeBrun: It's not that the league wasn't paying attention here. They know very well what is going on with these deals. Toronto did it a year ago, by the way. Certainly now with the flat cap, it's become a much bigger deal. The David Savard deal, the Nick Foligno trade, and Mattias Janmark on deadline day, all needed a third team to help with the cap space. The Sharks and the Red Wings, the teams involved, all got draft picks for being that cap space broker.

There are some team executives who aren't comfortable with what's going on here. With the salary retention happening twice from one team to another to another. As far as the league is concerned, there is no money outside the system, all the cap money is accounted for and, at the end of the day, a hockey asset was acquired by that team so they're okay with it.

Are the prospects events that were going to be scheduled by the CHL and the NHL for this July still in doubt?

Darren Dreger: Not necessarily in doubt, but the planning certainly is moving forward. That's all that the NHL and the CHL can do at this position. Both the CHL and the NHL are in conversation with the Alberta government. Given the success [they] had in return to play, if they can get approval from the health officials the NHL would like to hold a top prospects event in early July in Edmonton. ​