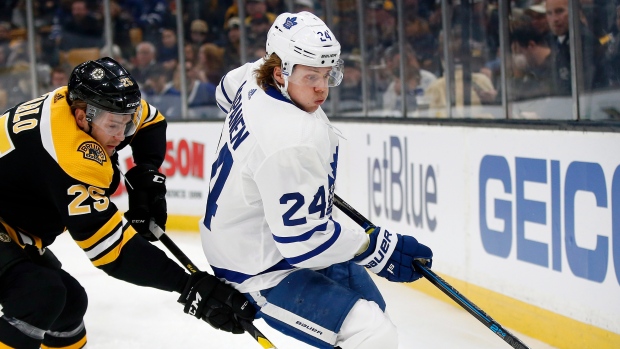 TSN Hockey Insiders Bob McKenzie and Pierre LeBrun join Gino Reda to discuss the NHL’s December roster freeze and how trade talks are ramping up, how the Carolina Hurricanes search for offence could turn to Toronto Maple Leafs forward Kasperi Kapanen and where the Leafs might look for defensive help.

The NHL’s trade freeze is coming up next Wednesday, December 19.  What are you expecting between now and then?

Bob McKenzie: If you’re a fan of trade talk, then Christmas comes early for you.  That doesn’t guarantee there will be a rash of trades between now and the December 19 roster freeze, but it does mean that there has been a lot more talk in this month of December than ever before.  The GMs I’ve talked to this week say it’s been somewhat unprecedented and most people point to the fact that the Los Angeles Kings, the Chicago Blackhawks, the St. Louis Blues and the Philadelphia Flyers are having really disappointing seasons and are really open for business on a lot of different fronts.

Pierre LeBrun: One team that almost had a trade last week, to my understanding, is the Hurricanes who had a deal fall through at the 11th hour with a team in the Western Conference.  We know what they’re looking for, they’re looking for a Top-Six forward, that’s why they were in on William Nylander all season long until Nylander re-signed with the Leafs.  There’s another Toronto player that we believe Carolina has talked about internally and that’s Kasperi Kapanen, who’s having a banner season for the Toronto Maple Leafs.

He happens to be a restricted free agent at the end of the year and Carolina, like a lot of other teams around the league, are wondering how the Leafs can re-sign all of these young stars.  Interest from Carolina, it has not been formalized as far as making an offer to the Leafs, but I think that will come and, keep in mind, Carolina has an abundance of defencemen and that’s primary need number one for the Toronto Maple Leafs.

McKenzie: There is no doubt in my mind that the Toronto Maple Leafs, between now and the trade deadline in February, nothing imminent of course, but their target would be to get help on the blueline.  If the St. Louis Blues say they’re open for business and they’re willing to listen on Alex Pietrangelo, or anybody else, you know the Leafs are going to make that call.  It doesn’t guarantee Pietrangelo will be traded by the Blues or if he is traded, that it would necessarily be to the Toronto Maple Leafs, but certainly Carolina, St. Louis anybody that’s got a good defenceman, Toronto will be interested in talking to them.

As for the assets that may move, you talked about Kapanen, Andreas Johnsson, Connor Brown those are other assets that Toronto may ultimately have to move if they want to get a defenceman.  Something to keep in mind on  Andreas Johnsson – he is eligible for salary arbitration at the end of this season, in terms of your asset management and protection, that might be a reason that he, more than Kasperi Kapanen, could be on the move.

The L.A. Kings are one of the teams very unhappy with where they’re at right now, battling for last overall.  Is it time to fold the tent, are they in the “Lose for Hughes” mode?

LeBrun: I don’t know about “Lose for Hughes” but certainly I think they are realistic.  GM Rob Blake understands what lies ahead here, it’s going to be painful with some tough decisions.  Certainly Drew Doughty and Anze Kopitar aren’t going anywhere, those guys are going to live through this rebuild or retooling of the L.A. Kings over the next couple of years, but otherwise I think Rob Blake is certainly all ears.  What does that mean for goalie Jonathan Quick? I don’t know if anyone knows for sure.

I don’t believe the Kings are shopping him, but I’ve also had teams telling me they are sniffing around that situation, so I really think it depends on the offer as he does not have a no-trade clause.  Beyond that, defenceman Jake Muzzin, there are other veteran players, the bottom line is the Kings have to turn this roster over, they have to get younger.

McKenzie: One of those veteran players the Kings have that could be attractive to teams looking for offence is Jeff Carter, the 33-year-old centre/winger who has the ability to put the puck in the net.  Whether it’s Boston or Arizona or any of the other teams out there looking for forwards, that might be the type of player that would be of interest to them.  Now it’s interesting, he’s got three years left on his contract after this year, $5.27 million cap hit, that’s manageable, even more manageable is the fact that he’s only owed $7 million cash for the final three seasons in one of those old back-diving contracts.

He doesn’t have no-trade protection, he loves it in L.A. and would love to stay.  If he does get traded somewhere he doesn’t want to go, retirement could be an option for him, that’s why he signed that back-diving contract, he’s only leaving $7 million on the table.  If he did retire, there is a cap recapture penalty that would hit the LA Kings at $3.75 million in each of the next three years.

At the start of the month we found out that Seattle is getting their expansion team a year later than they first anticipated.  What does that do to their GM hunt?

LeBrun: What I can tell you is that the Seattle group has, over the past week or two here, finally started to put some names down on a piece of paper as for GM candidates.  They’re not in a hurry, but I’m told they have 10-12 names on paper, they’re not going to reach out to candidates directly until those people’s seasons are over.  They want to respect that, so they’ll wait till the off-season to reach out. And the other decision, when do they hire a GM? Is it this summer, two years out or do they wait for a better candidate next year.