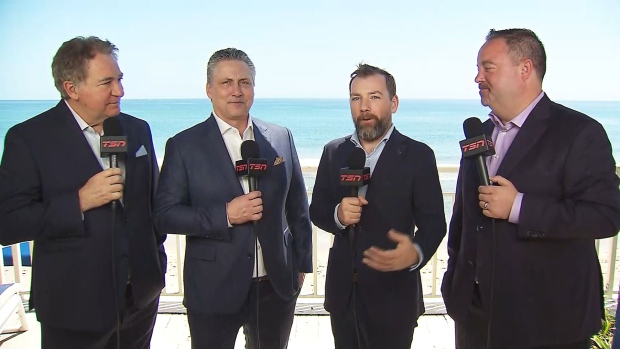 A month out from this year's Stanley Cup Playoffs and we're looking back at last year's playoffs - specifically Nikita Kucherov missing the entire regular season and then being a star for the Lightning in the post-season. Lots of significant discussions on that front.

Pierre LeBrun: And certainly not any discussions that led to any rules changes, because at the end of the day, that's a broader discussion. But the takeaway is that the discussion is not dead. Ken Holland of the Edmonton Oilers is the general manager that tabled this discussion on LTIR and a potential playoff cap. And the decision is to have this discussion again at the draft in Montreal in July - that perhaps there are ways to tweak this. And NHL deputy commissioner Bill Daly afterwards said that he's already had discussions with the NHLPA about this. I think one of the other things we can also ascertain here is that there's been a lot of white noise around Vegas and how they've treated the LTIR this year. Last year was Tampa, this year is Vegas, at least in perception. Gary Bettman and Bill Daly could not be any more unequivocal in saying Vegas has been transparent, there's no issues in how they're handling their LTIR business - there you go.

Darren Dreger: Bettman flat out said that it's not a huge problem. In fact, he called it a "perceptional issue" around National Hockey League media perhaps, certainly the fan base. But it is something that is going to have to be worked with the National Hockey League Players' Association. All of this is contained within the CBA. So if you go to the Players' Association and say, "Look, we have to make an amendment here, because there might be - at least the perception of - a competitive imbalance" in the playoffs, after the regular season? Okay, what are you going to give us to make that happen? So, that why they're pushing it forward. It is a concept only that requires more discussion, if not more negotiations.

And while that may take a little more time, there's one more pressing issue that they want to deal with right now.

Chris Johnston: That would be the way no-trade clauses and limited no-trade clauses are handled with player contracts. As we're leaving the GMs meetings on Tuesday, they're basically finalizing an agreement with the NHL Players' Association that will see some form of when those lists are submitted from a player, that it also goes to a central registry of the NHL and the NHLPA itself and eventually they'll build a database of this. Of course, this is in the wake of the Evgenii Dadonov trade - and then cancelled trade - because the league wasn't aware of his no-trade clause when that transaction from Vegas to Anaheim was initially approved. So this is a way to safeguard them in the future. I know that there's some concern among agents - I know Allan Walsh was on Twitter Tuesday saying now all these lists are going to get leaked - that's maybe one of the downsides. But clearly, the NHL and NHLPA can't have this happening to players either.

Another topic of conversation - International Hockey...

LeBrun: As Dregs reported recently, the plans for the World Cup of Hockey continue for 2024. But in particular, the fact that it's going back to the traditional field, the first time the league publicly confirmed no more Team North America Young Stars - I know that it upset a lot of people on Twitter because they loved that team in 2016 - but they're going back to traditional.

Johnston: They weren't prepared to confirm much else, but this is pretty far down the line in terms of being an 18-team tournament, the play-in as Dregs reported last week, and probably in multiple cities, though that's not all hammered in. Time is getting short on them here, they have to get this thing finalized.

Speaking of young stars, conversations continue between the NHL and CHL?

Dreger: They've got to hammer out a CHL agreement. It's been rolled over a couple of times because of the pandemic. Deputy commissioner Bill Daly acknowledging that he will be in contact with CHL president Dan MacKenzie. The general managers coming out of Tuesday's meetings want to talk more about 19-year-olds playing in the American Hockey League and it feels like every March, when we're healthy enough to be in a face-to-face environment, that the topic comes up. I know Kelly McCrimmon of the Vegas Golden Knights gave a very passionate account - as the former owner of the WHL's Brandon Wheat Kings - to tell the general managers (there's 11 new guys in there) how devastating this would be to the CHL if they introduce 19-year-olds at the AHL level.