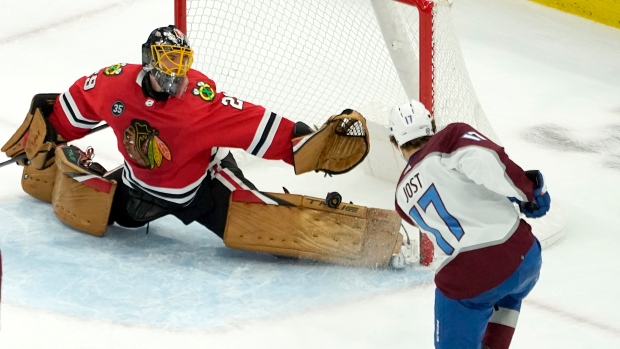 With the news of Jack Campbell set to miss time for Toronto due to injury, have the Leafs checked in on the availability on other goaltenders? Are the Sabres in the market for a partner for Owen Power for next season? Would a Claude Giroux trade just involve the Flyers and one other team? TSN Hockey Insiders Pierre LeBrun, Chris Johnston and Darren Dreger join host James Duthie to discuss this and more.

We knew goaltending was a concern in Leaf land already before Jack Campbell gets hurt and is out for a couple weeks. Kyle Dubas has said he believes in his two guys, but is there a chance he goes out and gets somebody as insurance?

Pierre LeBrun: I can't guarantee you they will go out and trade for a goalie, what I can tell you is they are doing their due diligence on the marketplace looking at a few goaltenders. Among them, we believe the Leafs have talked to Chicago about Marc-Andre Fleury. Again, this is more of a due diligence type, this is not a serious conversation at this point, but it does tell you that the Leafs are leaving no stone unturned. Marc-Andre Fleury is going to call his own shot - we've talked about this - and I don't believe that Toronto is on his short list of preferred teams. And by the way, I don't think the Washington Capitals - another team that's phoned Chicago - is on Marc-Andre Fleury's list of destinations. So, there's no guarantee Fleury gets dealt at all, but at this point it doesn't look like the Leafs would be a fit for Marc-Andre Fleury.

Chris Johnston: With Fleury not guaranteed to be on the move, it actually shapes up as a rather thin goaltending market when we look towards the trade deadline and that could leave the Arizona Coyotes with a decision on a goaltender they like. That's Karel Vejmelka. He's in his first NHL season this year. He's been one of the feel good stories for the Coyotes. As I mentioned, they like the player. They've engaged in extension talks on a new contract with his agent, but if they don't get a new deal leading up to the deadline, they are going to have to look at potentially moving him because he has less than a $900,000 cap hit and he's also one year away from potential unrestricted free agency, his arbitration rights as well. So that's a contract situation to watch because if he's not signed, he could be dealt.

Owen Power gets taken first overall and then elects to go back to the University of Michigan for another year instead of going to the Buffalo Sabres. We fully expect next fall he'll be with the Sabres, so we start to wonder who he might play with - are the Sabres wondering the same thing?

Darren Dreger: Absolutely. Kevyn Adams - the general manager for the Buffalo Sabres - has let other general managers know that he is in the market for a top-end defenceman, somebody who can partner with Owen Power in the NHL, but also a character player who can help mentor him along, show him some of the ropes. There's not a high level of urgency here. They'd like to get something done between now and the deadline, but if they don't, then they are comfortable testing the unrestricted free agent market in the summer.

Power is a terrific talent, so is Claude Giroux who is still high on our trade bait list. If this deal happens, is it likely to be a straight two-team deal or does it take a third party to get it done?

LeBrun: It might need a third team. It's not the preferred route. If you're the team acquiring Claude Giroux, you don't really want to pay an asset to a middle team - it could be as high as a second or a third-round pick on top of what you have to give the Flyers. The Flyers would also rather just have a straight deal with another team and not involve a third team. I'm told the Flyers have at least one team perhaps where they can do that with a team that could bring a contract back and make it a two-team deal, but, again, no guarantee that this trade goes through.

Dreger: The cap is always going to be a hindrance, that's just the norm this time of year. But there are also budget teams out there that are more worried about the cash payout than they are about the actual cap hit. I think of the Arizona Coyotes as an example. Maybe it's going to be a bit of an issue for the Coyotes to get to the floor for next season, so they're looking for bigger cap hits. Here's a player of interest, plays for the New Jersey Devils - Andreas Johnsson. He's in the third year of a four-year deal originally signed by the Toronto Maple Leafs. Signing bonus money of well over $8 million, but his final year pays a hard salary of $750,000. Now there is the signing bonus of $1.75 million but with a $3.4 million cap hit, that could help a team like Arizona with the cap, but also help them with a lower cash payout.

At All-Star [Weekend], Gary Bettman threatened to pull the draft out of Montreal because of the COVID restrictions. Now that they are back to full capacity in Quebec and everywhere else in Canada, is the threat gone?

Johnston: It's totally gone. I'd say you're safe to book a hotel room in Montreal in early July if you want to attend the draft. At this stage the NHL is expecting not only will it be full capacity in the stands, the representatives from all 32 teams will be there as we saw pre-pandemic last on the floor on draft day and basically this should be wrapped up in the next week. After the Heritage Classic on Sunday, NHL officials are heading to Montreal to put the final details on that.