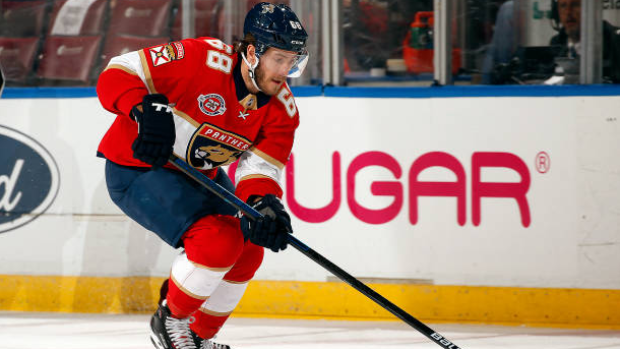 Reda: Mike Hoffman, No. 1 on our list of unrestricted free agents, still looking for a team and a new deal. What's the latest on him?

LeBrun: Yeah, really continues to be quite the story. Three weeks [ago] Friday that free agency opened and the top goal-scorer in the UFA class is still out there. I spoke to his agent, Rob Hooper of Octagon, on Thursday and I said, ‘listen, how patient are you guys willing to be here as this drags on’ and his answer was ... very patient. That's because they know what they have in their client. They think teams are eventually going to circle back and make the kind of offers that their client should be getting. And part of that is some teams finding cap room. Now, I think there are some LTIR situations that could come into play here, eventually closer to December or January. Boston (Bruins) with the David Pastrnak injury, Edmonton (Oilers) with (Oscar) Klefbom, St. Louis (Blues) with (Vladimir) Tarasenko. I think those are situations that the Mike Hoffman camp looks at as potential opportunities, over time. In the meantime, if a team like Florida (Panthers) where he played the last couple years or Nashville (Predators), which is called a bunch, if they finally step up and make better offers than they have been, then perhaps there's a deal there as well. But the bottom line: They're not going to panic, Mike Hoffman's going to wait for the right opportunity.

Reda: Darren, the Flames were extremely busy this off-season already adding Jacob Markstrom, Chris Tanev and you say Brad Treliving may not be done just yet?

Dreger: No, he's still looking for depth, they like their defensive corps. They like the changes that they've made. They like the fact that they've got good, young developing players that are ready to move to the next level. But Brad Treliving would also like to add an experienced right-side defenceman. More likely does that by trade than free agency but everything is possible at this point. What we know is they've secured their position in goal, Jacob Markstrom, they like what they've done up front, they're deep up front. So he's not dealing from a position of absolute need here, it's just making the Calgary Flames that much better and that much deep[er].

Reda: As we look ahead to this upcoming NHL season, whatever that start. Frank, another huge issue could be the condensed schedule. How will NBC's commitment to the Olympics in July affect the NHL?

Seravalli: Well I think, Gino, the assumption to this point has been that the NHL will need to come to a full stop and complete the Stanley Cup playoffs before the Olympics start on July 22. But I'm told don't assume anything at this point, that the NHL has a multitude of options available if they need to prolong the season into the summer. We don't know when the season is going to start at this point so it's hard to say when it's going to need to conclude and one option that the NHL has on the table could potentially be bringing in another broadcast partner. We know that this is the final year of NBC's U.S. national television rights deal and looking forward does that contract end on July 1? Does it conclude when the season ends? I think there's all sorts of questions there. I'm just told consider every option because don't assume anything in 2020 in the COVID era.

Reda: The NHL's current deal with NBC is worth $200 million per season, as you say, Frank, it's set to expire at the end of this upcoming season.