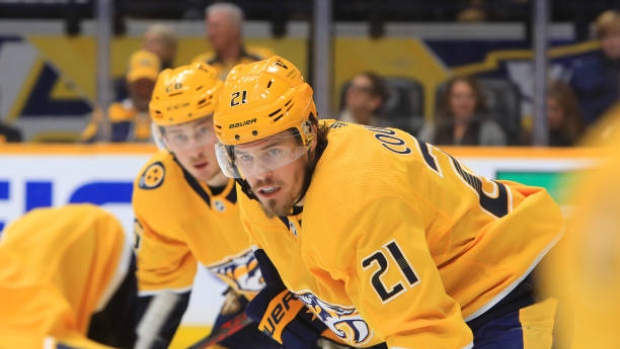 TSN Hockey Insiders Pierre LeBrun and Darren Dreger join host Lindsay Hamilton to discuss how the players feel with COVID numbers rising, the latest on the Beijing Winter Olympics, the possibility of the Canada-USA border closing, and the chances of a World Cup if not the Olympics.

How are players feeling about the COVID-19 numbers going up?

Darren Dreger: Players are starting to speak out.

Nick Cousins of the Nashville Predators bluntly said on social media, “Pause the season until after Christmas? This is ridiculous.” Cousins fully supports advanced protocols; however, he doesn’t think it’s fair to have the COVID threat hanging over the players and their families.

He doesn’t want to miss games and he’s going to have to because he is one of the players who have tested positive.

His suggestion here is to put the league in pause until Dec. 26.

In a perfect scenario that would allow all who have tested positive to get healthy again, to recharge, and to get going again after Christmas.

It’s a tough one because the players and the owners share the revenues. Any lost games moving forward in the regular season will hit that 50/50 hockey-related revenue.

What’s the latest on the Beijing Winter Olympics?

Pierre LeBrun: We’re at a tipping point when it comes to the Olympic decision. If the NHL has one or two more full team outbreaks that produces a team shutdown, like the Calgary Flames right now, I think the Olympics might be out of the question.

It’s one of the reasons why the NHL Players’ Association are on the same page as the NHL when it comes to handling the situation right now [regarding] this COVID wave and enhanced protocols. They’re hoping to navigate these turbulent waters within these next couple of weeks, and not pause the season. Once you pause the season, then there’s no chance [of] the NHL players going to the Olympics.

Remember, in the agreement with the NHLPA it states that if there’s any material impact to the NHL season then the NHL can say they’re opting out of the Olympics.

What are the conversations between the NHLPA and IOC?

Darren Dreger: They’re starting to heat up. The NHLPA and the NHL need a solid direction and answers from the International Olympic Committee.

The NHLPA conducted three separate conference calls this week trying to educate and inform their players. Their players have concerns like what quarantine is going to be like if a player or a member of a federation tests positive while at the Olympics in China.
They’re getting different answers from the IOC, Beijing Organizing Committee, and from [the] medical community. There’s a higher level of frustration and they need direction from the IOC.

What is the possibility it comes down to an individual player’s decision rather than collective from NHLPA?

Pierre LeBrun: That is one of the options on the table. I don’t think it’s the best one, but it might be one that appeases the most players.

[Right now] we’re thinking this going to be a big NHL/NHLPA announcement. Are we going to the Olympics or not by the Jan. 10 deadline? But it may be that the NHLPA doesn’t want to take away that Olympics right away from its players. [They may] say whoever wants to go can go and if you don’t feel comfortable going, then don’t.

Sort of a piece meal solution.

To me, that puts pressure on a lot of players. I think about the players who play for Russia and, to some degree, players from Canada, there’s peer pressure that might develop to some degree from that type of solution.

It’s on the table right now.

Could the rising cases effect the Canada-USA border?

Darren Dreger: It has to be on the table at this point.

We’ve been talking about the Montreal Canadiens at the Bell Centre closing its doors to its fans until January. In Ontario, capacity has been chopped in Ottawa and Toronto to 50 per cent.

The main reason there was a Canadian division [last season] was that the federal government closed its borders last season. Perhaps [the Canadian government will] consider that again and the NHL has no choice but to seek a special exemption.

As long as the COVID numbers continue to climb, I think everything will be considered.

If NHL players don’t go to the Olympics, what’s the likelihood we may see another major event in its place?

I had an NHL team executive ask this week if there’s no Olympic participation, why not have the NHL and NHLPA host a World Cup in February during that three-week break?

I checked with the league and the NHLPA and it’s not going to happen. It takes 12-to-18 months of planning to put together that type of event and there’s obviously not enough time to do that.