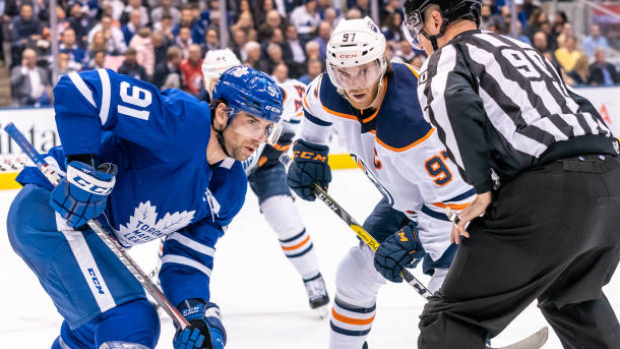 TSN Hockey Insiders Darren Dreger, Pierre LeBrun and Bob McKenzie joined host James Duthie via videoconference to the latest on the NHL and NHLPA working to finalize Phase 2 of their return protocol and the selection process for the 2020 Hall of Fame class.

Gentlemen, we’re in the middle of May now. So how close is the NHL to bringing in Phase 2 of their plan to resume, which will be players getting back together? And Dregs, what sort of rules will be in place when they do that?

Dreger: Well, look. Let’s start with the beginning of the question. It’s impossible to identify a true deadline. Of course, the hope is later this month. There’s some clubs who are optimistic that might happen, in terms of initiation of Phase 2. There’s other teams around the NHL that are way more pessimistic, especially given the surge in cases in Russia. But there’s a lot of work being done on the protocol between the NHL, the Players’ Association and the Return to Play Committee. Now, some of the protocol in Phase 2 is pretty obvious. It’s small gathering stuff. It’s social distancing. It’s scheduled shifts when players are allowed to return to their home clubs. It’s small dedicated team staff working on training and what not. It’s strict sanitization protocol. All of this could be decided and determined and agreed upon at some point this week. It could drift into next week.

Another June tradition, besides the draft, would be the selection and announcement of the Hockey Hall of Fame class. Does that go ahead as scheduled, Pierre?

LeBrun: It is, in fact, going ahead. June 23 and 24, the selection committee will meet in a virtual manner, of course, goes without saying. That will be a first in the Hall’s history. So we will have an announcement on June 24 for the 2020 class. But, what about the induction itself slated for November 16? Obviously, it could be postponed. When you think about how important the Hall of Fame game is to that weekend. Well if the NHL isn’t coming back until December next season, which is as we reported a possibility, then I think the Hall of Fame probably postpones their induction. Especially with concerns about large gatherings. When exactly? They don’t know that yet and I don’t think they want to make a decision. Until the summer. Now, as for this year’s class? It’s worth a reminder that Jarome Iginla is a first-year eligible player that jumps off the list. And of course, you have a long list of players who have been passed over over the years from (Daniel) Alfredsson, to (Alex) Mogilny, to Kevin Lowe, to Doug Wilson to Sergei Gonchar. That is for Bob McKenzie and the selection committee to figure that out next month.

A junior hockey team declaring bankruptcy. Is this a unique situation or a real and potential sign of the times and trouble for the CHL?

McKenzie: Well it could be both over the long term. In the short term, the news that the Portland Winterhawks were part of a filing for bankruptcy came as a huge shock to the Western Hockey League and all of junior hockey. This is one of the most well-heeled franchises. Or at least historically has been one of the most successful on the ice. One of the most successful of the ice. But this bankruptcy has more to do with owner Bill Gallacher’s issues in the gas and oil industry and having to file Chapter 11 for his parent company than anything to do with the Winterhawks. Now, listen. Junior hockey needs to put people in the stands for people to see the games and for junior hockey to be successful. If there’s no fans in the stands for 2021, there may not be any junior hockey to speak of that could dramatically financially impact a lot of owners then. But, for now, it’s a one off.