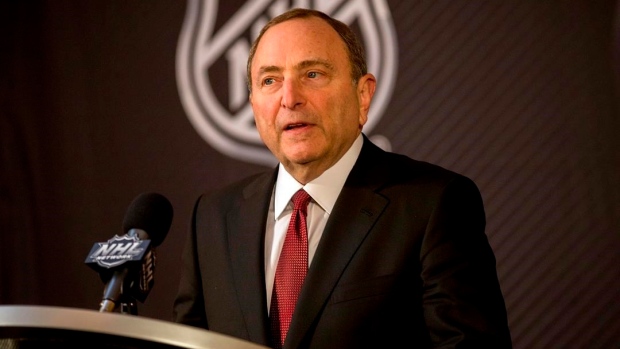 Six weeks from when we last saw NHL hockey, there seems to be an actual plan to finish the season, do a playoffs and award the Stanley Cup. There’s still a lot of things to sort out before they can actually pull that off. Bob, how would this plan look?

McKenzie: Everything is subject to health officials, government officials, from region-to-region and country-to-country and so forth. All of that said, the National Hockey League is looking at this in phases. And we’re currently in Phase 1 and we have been for a while. And that is basically quarantine, lockdown, self-isolation, nothing tangibly really happening. But the NHL is optimistic that at some point here -- and when that is we can talk about some more – maybe to go into Phase 2. And Phase 2 would be players in Europe coming back to North America. Players from all over the world basically reporting back to their base camps, their teams, if permitted. And getting into a quarantine for a two-week period where they would train, small group training. Start to ramp it up. At that point, maybe after two weeks, they can get to Phase 3, which would be the much talked about four divisional cities that would host multiple teams in those locations. And there would be a two-to-three week training camp there. And then of course, Phase 4, if all goes well, would be games. And the NHL is still stressing regular season games plus playoff games. That’s kind of what the big picture looks like. In a perfect world.

Dreger: That would be a perfect world, no question about that. But the best-case scenario for some around the league, pie-in-the-sky thinking, if you will for the beginning of Phase 2, is the second or even the third week of May. Best-case scenario would be May 15. And you’re right. They’d bring the players back to their NHL cities and kick into Phase 2, allowing small groups of players to return to their NHL facilities and begin working out both on and off the ice. The NHL and NHLPA are currently talking about the restart strategies now, but there are some NHL clubs out there that aren’t nearly as optimistic. And they just don’t see it being safe enough to return, even in isolated conditions, anytime soon. What we know is this. And the commissioner’s office continues to stress this, they can plan, they can strategize, but until the health officials give the clearance, hockey isn’t returning.

TSN Senior Hockey Reporter Frank Seravalli reported that there were several identified cities as prime candidates for these regionalized games, including Toronto and Edmonton. How many cities do you think are maybe in the mix for this?

LeBrun: So what I was told today further to Frank’s excellent reporting, is that the NHL is in the process of vetting 12 NHL cities right now. And they’re not going to zero down to four really until the last moment. And the reason for that is obvious. They don’t know right now where the hotspots are going to be in terms of where this pandemic heads a couple of months from now when they hope to return to the ice. So they’re going to look at all of these cities. Get them all ready to go. And then at some point cut that list down. But because of that, guys, you’re going to hear a lot of different cities thrown out there as being part of this group. And they are, but it doesn’t mean they’ll make the cut at the end of the day. Yes, Toronto and Edmonton, as Frank mentioned, Dallas, Pittsburgh, Minnesota and Columbus [are] all part of that list of 12, I’m told. And when you get to the playoffs, it might be four in the opening round, down to two in the second round and down to one perhaps for the final rounds. All ideas that can change, but that’s the plan at this point.

What about the draft and the draft lottery? How would they work? Could they still happen before the season resumes?

McKenzie: Well the NHL head office, particularly deputy commissioner Bill Daly amongst others, are very bullish on this idea of having the draft in early June. Not late June, early June. Because in a perfect world, they’d love to fill the void of everything that is going on right now in terms of hockey news and excitement, do something with the draft in early June, and then in mid-June, starting really drilling down the possibility of return-to-play protocols and whether that might be able to happen. As Pierre LeBrun will tell us in just a moment, there’s some pretty significant negative reaction from NHL general managers. One of the issues is the order of selection or the draft lottery. How would it work? And the National Hockey League believes they can answer all of these questions, including tweaking the draft lottery if they need to, to maybe having it go back to the way it used to be. And that is just one team wins the lottery, and you can’t move up any more than four spots. I think the National Hockey League head office feels like they’ve got all of the answers to the concerns from the GMs, but as Pierre will tell us here, there are a lot of concerns.

LeBrun: I solicited feedback from teams around [the] league [and] sources in 28 NHL front offices got back to me and it’s not pretty. Fifteen of them believe it’s a hard no. They have no interest in having a draft before the season resumes. Five of them responded yes. And there were eight that [are] in the sort of mixed-feelings camp. That they want to think about it more and don’t feel that strongly either way. Overall, not a pretty picture for the league. It’s the feedback that the league is obviously trying to figure out whether to proceed with or not as far as this idea. And the issues are obvious. There are teams that value the normal draft to make trades and improve their roster. Well if you have a draft before the playoffs, you can’t make player trades. You can only make trades involving picks. As a few teams mentioned to me, look at the Montreal Canadiens, they have 14 picks in this year’s draft. No question they were probably going to try and wheel and deal to improve their NHL roster. Well, they won’t be able to do that with some of those picks if there is a June draft. Again, nothing decided, but that’s been the feedback so far. That’s not exactly resounding support for the idea of those happening in June.

Dregs, there’s a story you’ve reported on for months. It kind of quiets down during all of this. But it’s still out there, is the allegations against the Coyotes for doing physical testing on draft prospects before the combine. Does this get resolved before we have a draft?

How does this impact other leagues? The AHL?

LeBrun: It’s worth mentioning that the American Hockey League hasn’t announced what it’s doing with its suspended season for this year. Let’s be honest. The chances are pretty much zero that they’re going to resume their season this year. They are a gate-driven league. They need fans in the building. So at some point, they’ll get the board together and vote on that. But, I suspect this year is toast. Their focus, really, has begun on what to do about next year. The AHL has started modelling different scenarios for next season. Again, not knowing what the world is going to look like exactly. But because they really do need fans in their buildings, especially all of those franchises that are owned independently, and not the ones owned by NHL
teams. I don’t know if they could open without fans in the building. So they’ve had modelling for an October start, a November start, a December start, and even a scenario in which they have a short January season. It’s all up in the air, but those are all things the American Hockey League is discussing. In the meantime, you’ve got NHL teams that are a bit nervous about whether the NHL season starts a few months before the AHL and where they park their AHL prospects. Again, questions but no answers right now.

McKenzie: The Canadian Hockey League, which is the OHL, WHL, QMJHL, is going through exactly the same thing as the AHL and the reality is the NHL is probably the only hockey league that can open up next fall without fans in the stands. The economics just don’t make sense for other levels of hockey, including the AHL and the CHL. So the CHL is having its contingencies as well. Various start dates. They’ve already agreed that they are going to move the Memorial Cup from late May to early-to-mid June to give them a little more flexibility in terms of later starts and going??. They could be looking at a season that is heavily backloaded after Christmas with teams that would normally play 34 home games, maybe only play 10 before Christmas and 24 after Christmas. So, lots on the table there. The CHL, by the way, is still looking at June 30 th as a possible date to do its import draft and take care of some business in the meantime.