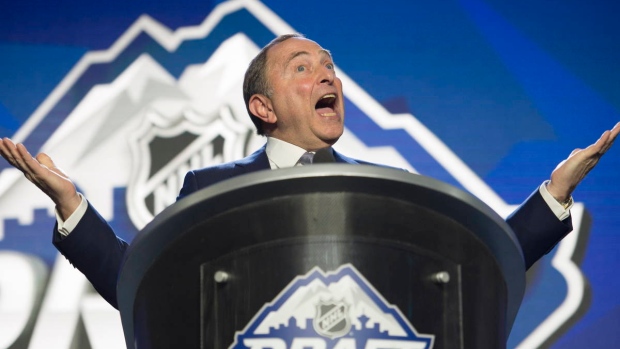 With the ongoing logistical nightmare the league faces in the wake of COVID-19, the draft may be the next thing that needs to be pushed back as a result. As of three weeks ago the NHL was not considering rapid testing, but the league is now reviewing its entire approach to health protocols as the situation continues to evolve. James Duthie is joined by Darren Dreger, Pierre LeBrun and Frank Seravalli to discuss that and more.

James Duthie: Is the league considering pushing back the draft?

Darren Dreger: It sure sounds like that; there’s ongoing conversations at the NHL level, hockey operations, the National Hockey League is deeply involved, the commissioner’s office will get involved as well. I will say this, there’s no guarantee that the NHL is going to host the draft in July. Now, there’s lots of talk across the National Hockey League about the draft being pushed from 2021 – this summer – to 2022 –  the summer – and the NHL hosting back-to-back drafts. NHL general managers are very much in favour of this and you got to think the 2021 draft eligible players would also be in favour of it, given the fact a majority of these kids aren’t playing hockey right now. But, keep in mind this is a CBA-related issue, the NHLPA is not involved yet, but they will have to get involved if there’s change.

Duthie: That would be a major change. Three weeks ago the NHL was not considering rapid testing, that has changed, Frank?

Frank Seravalli: It has to [at] this point, James. The NHL and NHLPA are investigating their options in regards to rapid testing. Look, they’ve had no other choice but to investigate at this point given the number of positive tests that have come after players have tested positive already with that 24-hour gap in the PCR testing. There’s two things that are standing in the NHL’s way at this point. One is the availability and two is accuracy, they’re targeting a rapid test from Merck Pharmaceuticals as one that they would like to get, but it’s been hard to do that so far. To this point, the NHL has used rapid testing in some key situations, layering it in over the last seven to 10 days. But, it’s certain that we could see more of that in the coming future as the NHL continues to move forward.

Pierre LeBrun: I reached out [to] NHL deputy commissioner Bill Daly and asked about the particular back-to-back afternoon games between New Jersey and Buffalo which certainly led to some of the situations with the rescheduled games, and his answer in a more broad sense was that there really is nothing the league isn’t looking at right now. What he said is, “I think it’s safe to say we are looking at and rethinking everything – top to bottom.” And, without getting into specifics, which he wasn’t at liberty to do, I think what this means is that the same way we were sort of preconditioned before the season started for a schedule, that was going to continue to change because of rescheduled games, I think the actual protocols are going to continue to change as we get advice through this.

Seravalli: Speaking of protocols and schedule changes. All of that’s wreaked havoc on the offices as they try to cover games in this unique season. They have actually had to use referees and linesmen interchangeably at times and also dip into their pipeline of minor league officials, who are on NHL contracts. For instance, Brandon Schrader, he refereed the game in Philadelphia Wednesday night, but did the first few games of his seasons as a linesman, so they’ve gone back and forth. On busy nights, between injuries and a couple positive COVID tests, they’ve had to do things a little differently and be flexible this season in the officials’ department.

Duthie: Hockey news does continue; Sam Bennett wants out of Calgary, scratched tonight. Does that put the process on hyper-speed?

Dreger: Well, it definitely does. It certainly amplifies the trade speculation across the National Hockey League media bases. Now, many wrongly assuming that a trade must be imminent, given the fact Bennett has played well of late and he is a healthy scratch against the Winnipeg Jets. But, there is no front-burner trade for Sam Bennett at the moment, but there is a good amount of interest at this stage.

LeBrun: Yeah, and why not do another Insider Trading update on the Pittsburgh Penguins general manager search. What we can tell you, is after the Penguins interviewed Kevin Weekes on Wednesday, we believe they interviewed Ron Rextall on Thursday and within the next day or two, Mark Hunter, the former Leafs executive, will get an interview. The Penguins also [are] supposed to interview a few other candidates throughout the weekend, before starting the second wave of interviews on a shorter list next week.