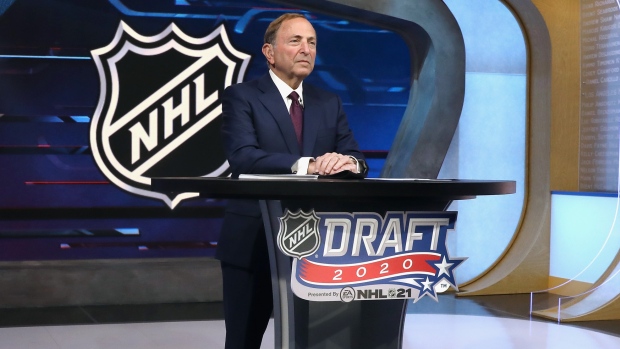 With recent COVID-19 cases arising in the NHL, it has become clear that rapid testing is needed. How close is the NHL to making it a possibility? How could the Draft and Draft Lottery change? When will they take place? TSN Hockey Insiders Pierre LeBrun, Darren Dreger and Frank Seravalli have more.

Given what happened in the Habs and Oilers game and on the heels of Tomas Nosek getting yanked out of the Vegas Golden Knights game on Tuesday, it’s pretty clear how critical rapid testing has now become. Where are we on that front?

Frank Seravalli: This has been a massive undertaking on the NHL’s part over the last week, securing enough docking stations to finally roll out rapid testing across the 24 United States-based teams. They had enough docking stations as of Wednesday night to make that effective, they’re still going to be limited in the capacity that they can test on a daily basis, so for right now it’s just going to be players. They’re eventually going to roll that out to the regular PCR test in addition to a rapid test per game day and then they’re going to try and find a way to roll this out for the seven Canadian-based teams as well. We’re talking about hundreds of these little docking station devices that process these tests, 22 per team, so it’s been a massive undertaking, but not a moment too soon to try to keep these players and staff safe.

Because of the pandemic, plans for this year’s NHL Draft are still very much up in the air and now we could also see changes to the Draft Lottery itself?

Pierre LeBrun: That’s right, you may recall back in October, the GMs had a meeting or had a call, these days during the pandemic, and there was some grumbling on that call, that we reported on, where GMs talked about the need to change the Draft Lottery system. The NHL responded by saying OK, we’re going to go back to you guys and solicit some of your ideas and we’ll see where this goes. Well here is where it has gone, NHL deputy commissioner Bill Daly confirming to me that the league is working on changing the format for the Draft Lottery and something is going to be presented to the Board of Governors here sooner rather than later.

Now, that’s as far as he wanted to go, because they’re still working on it, so we don’t know exactly what those changes will be, but we assume from talking to other people around the league, that it’s probably going to augment the chances of the bottom teams of getting that first overall pick. There are a lot of people around the league that simply felt that a team like Detroit, undergoing a real rebuild, 23 points behind the 30th-place team last year, should not have been picking fourth. So, look for that type of change and perhaps other parameters in the lottery to also change and I think it’s a long time coming for some teams who felt the pendulum had gone too far the other way.

Once the Draft Lottery is done, do we know when the draft is actually going to be held?

Darren Dreger: No we don’t, and there is a lot of work that has to get done before that. The National Hockey League will set up a virtual general managers’ meeting in the relatively near future. Now there is so much going on COVID related, it’s not considered to be top priority, but they want to know what the general managers’ position is and for the most part the position is the general managers are in favour of moving the draft. Now there are three scenarios that are being discussed internally by the National Hockey League. One of them is just maintaining status quo, host the draft in July no matter what the playing status is of this year’s draft-eligible players. Another one, push the draft to December, January, buy some time to scout players, but this is not a preferred option by the clubs. The preferred option as we suggested last week, is move the 2021 Draft scheduled for July into the summer of 2022 and host back-to-back drafts. Now, high priority issues for all general managers and their scouting departments, but not necessarily top priority for the commissioner’s office.

Willie O’Ree was supposed to have his banner raised in Boston next week, but the league just moved the celebration to next January 18th, that’s exactly 64 years to the day that he became the first Black player in the league. They say that’s going to allow them to commemorate the moment in a way that matches its magnitude.