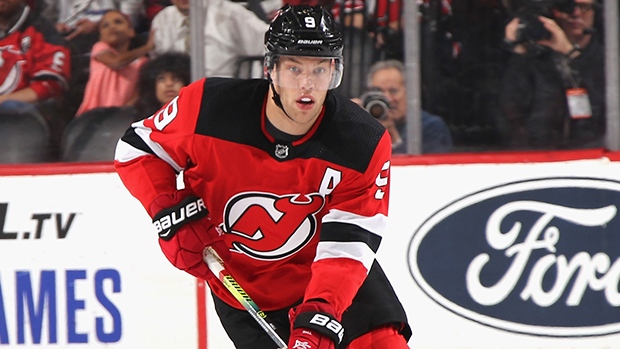 The TSN Hockey Insiders discuss the contract extension situation between Taylor Hall and the New Jersey Devils, two teams with a logjam of defencemen, and draft eligible players trying to make an impression ahead of Team Canada's World Juniors selection camp.

It’s still early and there is a lot of time before the Trade Deadline, but for Taylor Hall, has there been any progress on a contract extension with the New Jersey Devils?

Dreger: There hasn’t really been official progress but constant dialogue and communication between Devils GM Ray Shero and Hall’s agent Darren Ferris; they will meet again this Thursday in Calgary. To this point they haven’t discussed the parameters – term and money – of what a deal might look like to keep Hall out of unrestricted free agency. I’m sure that Ferris would prefer Hall wait until the end of the year, go through the courting process and then see what the field might look like on July 1. But at the end of the day, that decision will be made by Hall.

LeBrun: Another pending unrestricted free agent is Tyler Toffoli of the Los Angeles Kings. He’s only 27-years-old and you wonder, where he fits into this Kings rebuild? And it is a rebuild; the Kings are going to turn this roster over big time over the next couple of years. At this time, and it could change, I don’t believe the Kings are thinking they’re going to re-sign Toffoli. I do believe he’ll be made available for a trade closer to the February 24 Trade Deadline.

He was a healthy scratch recently and his numbers dipped last year, but he is a former 30-goal scorer and three-time 20-goal scorer. Of course if you’re Toffoli, and getting moved is going to be the case, probably sooner rather than later is better so you can go somewhere else and boost your numbers in a contract year.

When the Carolina Hurricanes traded Justin Faulk ahead of the season, it was supposed to clear up the logjam on the Hurricanes’ blueline, but it’s still pretty crowded back there…

LeBrun: They keep growing on trees, those defencemen in Carolina. They have a surplus right now and they don’t want to lose one on waivers to cut down to the proper number on defence. They’re trying to acquire a top-nine forward at some point and they’re willing to move one of either two defencemen: Haydn Fleury or Trevor van Riemsdyk. They’re both restricted free agents on July 1. For the right price, I think that Carolina would listen and move one of them.

Dreger: The Buffalo Sabres are jammed up on the back end as well, or will be soon when Zach Bogosian and Marco Scandella are healthy, and that’s right around the corner. GM Jason Botterill is starting to shop and he would like to add a couple of forwards. In a perfect world, a top-six forward, and he’d like to add a bottom-six forward as well.

With the World Juniors around the corner and the Russia-Canada CHL series underway, what do a couple draft eligible players have to do to make an impression and get to Team Canada’s selection camp?

McKenzie: It’s not impossible for draft eligible players to make Team Canada, we’ve seen that in the past, but it is difficult. For Quinton Byfield, second in our pre-season draft rankings, and Cole Perfetti, tied for fourth, the two games they will play against the Russians are so important. They need to show they can respond to a step up in competition against this touring Russian team. If they play well there, the next step is to get invited to the Team Canada’s camp, and then try to make the team in mid-December.

McKenzie: Brad Lambert is 15-years-old, plays on the Finnish team, and is notable for a number of reasons. His uncle is Lane Lambert, who played in the NHL, and his dad Ross grew up in Swift Current, so how cool is it for this kid to be able to go to the U17 tournament and play in his dad’s hometown? The next noteworthy thing about him is that he’s perceived to be an elite prospect for the 2022 NHL Draft and he doesn’t have an agent yet. So all the big time agents, they’re all courting this kid. And the final thing, Hockey Canada would love to repatriate this guy and make him a Canadian for international competition. But he only played one year of his minor hockey in Canada, his pee wee year in Saskatoon. You need two consecutive years or residency for that to happen so it’s going to be a challenge for Hockey Canada to pull off.