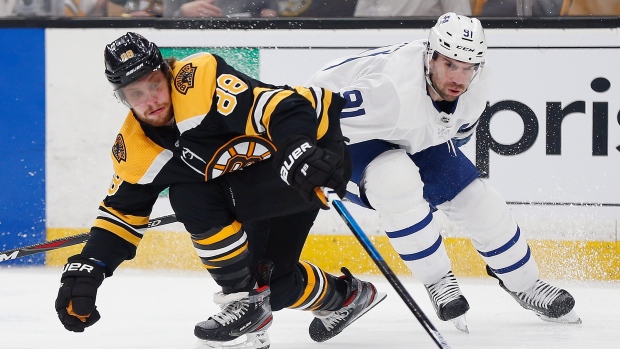 With the NHL season on pause, players and some governors alike believe that an August-to-September finish could make sense, assuming the global pandemic subsides. But as our Darren Dreger, Pierre LeBrun and Frank Seravalli explain, that it is only one of many ideas being thrown around in such a unique situation.

Smith: Normally Insider Trading is done in a different form and with very different subject matter but of course we are in very different times now. Here are the Insiders, truly inside their home offices in isolation. Frank Seravalli, Darren Dreger and Pierre LeBrun and Frank lets start with you. I mean its a matter of perhaps when and maybe if the NHL season is able to resume again this year. That being said, of course, the league has to have some contingency plan or plans in place. I understand it goes beyond the league, too, that the players want to be working on a plan as well.

Seravalli: Thats right, Rod. Some of the best players in the NHL, think Hart Trophy and Conn Smythe calibre players, have been kicking around some ideas in some group chats. Theyre following along with the rest of the health experts knowing that this may take until July or August for the coronavirus to really have enough people recover and build up immunity so theyre saying in these uncertain times, how could we find a way to potentially create some certainty here for the players and one way to do that, the idea theyve proposed is to open training camps at some point in July. Then play regular season games, potentially enough games to formulate the playoffs and have enough teams play the same number of games as also warmup games for the teams going to be in the playoffs and then start those playoffs in early August. Have the Stanley Cup awarded by late September and then begin a three- to four-week transition period in which you conduct the draft and free agency in October, followed by the start of a full 82-game regular season that would of course be on a condensed schedule starting then in November. Now this is something thats making its way to the NHLPA and at that point theyre hoping that they could present something like this to the NHL where Im told theyre ready and willing to consider any and all options at this point. The NHL is certainly not in a position to be closing the door on just about anything at this point.

LeBrun: And Frank, what Im hearing is that the NHL has already heard at least some version of this interesting idea that you bring to us here. Because I spoke with an NHL governor today who has had this particular idea as well. Or at least a version of it. For him, it would be straight to a 16-team playoff in August/September, playoffs and the October off-season. The point that he makes about the October off-season, thats the particular month for so many teams, especially southern United States, dont want to have a lot of games and so perfect time in his mind to make the best of a tough situation. Have the off-season in October and start the regular season in November. His point is this: if the NHL tries to come back in May or June and there is a positive test, it shuts down the season again. Wait as long as you can is this governors opinion. It doesnt mean that this global pandemic will be done by August but perhaps hopefully, there are drugs in place or there are better medical situations to deal with positive tests. Though he is all in favour, he has shared this idea with commissioner Gary Bettman and he hopes that Gary Bettman continues to have an open ear to this type of idea. At the end of the day, waiting, in his opinion, is the best form to go. The other thing Id say on this, is one last thing, is the idea of having 20 or 22 or 24 teams in some kind of expanded playoff. I spoke to a GM today who said, you know what, it doesnt make sense to bring back some teams and they lose two games in a best of three and theyre out after their players have been working out for eight weeks. To him, you got to go back to 16 teams. I will say this in talking to an NHL source today, there is no leading option right now that theyre looking at. Its too premature, yes theyre having different conversations about modelling potential playoff formats but there isnt one particular format that theyre buying into heavily at this point. Its just too early.

Dreger: I dont know how you can dismiss any concept at this point. But to go back to the players thinking on this, look if Im commissioner Gary Bettman, if Im Don Fehr, the executive director for the NHL Players' Association, if Im a club owner or NHL general manager, I would want the best playing minds involved in the sport to present any ideas that they have and that sounds exactly whats happening here. And I think most of us here look forward to seeing the end result in terms of the presentation made by these players and the National Hockey League Players' Association. All you have to do is spend five minutes talking to Sidney Crosby and you can feel the pure passion that comes out of him, the sheer knowledge that he has specific to the NHL game. If this group of players is as invested as it seems like they are, then the hockey world absolutely has to listen.

Seravalli: While there is no question Dregs that theyre certainly invested, the reason why they like this is because this checks all the boxes [for] them. As Pierre mentioned, you cant come back and then all of the sudden have a positive test within the playing group which would derail the situation. In addition to this, waiting longer allows you to potentially play in front of full buildings right from the start. The players dont want to be playing a Stanley Cup thats going to be awarded in front of an empty building. In addition to that, that would all maximize revenue. You get as many games as you can to finish out this season and then you get a full slate next year. Would it be weird to be playing hockey in August and September awarding a Stanley Cup? Theres no question about that but these are uncharted waters. Were dealing with an annual rite of spring in the Masters being played in the fall, the Kentucky Derby being run in September, were going to have to be opening our eyes to all sorts of new realities.

Smith: So, yes, in the meantime, they consider contingency plans, the league and the players youve talked about, and lets face it, the National Hockey League head office has a lot of downtime right now. And hey we all do, how are they putting that downtime to use to maybe improve the game Darren?

Dreger: Well effectively, Rod. The hockey operations and the department of player safety, to name a couple of the many departments that exist under the umbrella of the National Hockey League, are really going through what is best described as an off-season review. Now traditionally they would do this in the summer, not that either hockey operations or the department of player safety has a whole lot of downtime over a 12-month calendar. But they are trying to take advantage of it. You know if your hockey operations perhaps youre looking at some tweaks that have been made over the last few years and youre analyzing and continue to poll general managers or other hockey people to see whether they like the adjustments that have been made or you forecast some changes that might be considered moving forward. If youre the department of player safety, I know George Parros is spending a lot of time talking to his internal group and theyre looking at ways that they might consider improving. Perhaps tweaks in the process, procedural things that could be addressed or considered before the National Hockey League resumes. Theres a lot of discussions that are happening. Again, at head office and around the National Hockey League. Not just NHL head office, but around the 31 NHL teams as well. Theyre all preparing for the inevitability of the game restarting. They just dont know when that might be.

Smith: And of course a lot of the urgency came from last Wednesday night. It was announced an NBA player, Rudy Gobert of the Utah Jazz, had tested positive. That seemed to really trigger a lot of reaction in the sports world including the National Hockey League. So NBA player testing has certainly been in the spotlight, Pierre, but what about NHL players, any news there on that front?

LeBrun: Well some NHL players have been tested but so far as of 2 pm ET on Tuesday here Rod, no players in the NHL have tested positive according to both NHLPA and NHL sources. You know I suspect they will happen, lets be honest. Like anyone else in North America right now, this is spreading and from your everyday life even with self-isolation, I just suspect well have some at some point but none so far. If I can add just a quick little note to end on a positive, guys. Just texted with Joe Thornton of the San Jose Sharks, you know the Sharks are last in the Western Conference, even if the playoffs resume in some fashion, its not going to involve the Sharks. So this could be it for Joe Thornton this season. I asked him if he still plans on coming back for another year, he turns 41 in July, and he says I have years to go. He indeed intends on coming back with the San Jose Sharks whenever there is a season as well next year.

Smith: It is great and refreshing to hear from Joe Thornton and his plans. Guys its just incredible to think that one week ago, the NHL was still playing games and the biggest concern at the time it seemed was the possibility of some of their franchises having to play in empty arenas. Of course so much has changed so quickly since then and we still have no idea when it will return to normal again. They are our hockey Insiders.