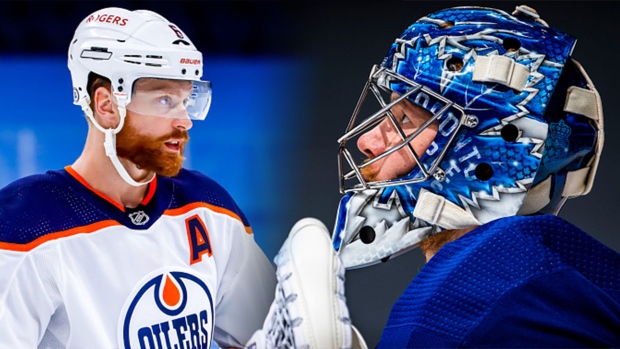 The TSN Hockey Insiders discuss the Oilers’ re-signing of Ryan Nugent-Hopkins, what’s next on Ken Holland’s radar, Frederik Andersen’s future in Toronto, the Blackhawks’ interest in adding a high-profile defenceman, and much more in the latest edition of Insider Trading.

What does Nugent-Hopkins signing mean for Oilers?

Darren Dreger: It was a big signing, lots of negotiating. There were stretches where there wasn’t a lot of talking but it was [a] priority for both Ryan Nugent-Hopkins and the Edmonton Oilers to get something done. Nugent-Hopkins probably left money on the table but he got the term. RNH was a priority for Edmonton general manager Ken Holland, as is Adam Larsson. I believe the Larsson negotiations are into the final stretch and will get done soon. Once Larsson’s deal gets done, then Holland will dive deeper into the off-season, looking for help up front through free agency and obviously bolstering his goaltending as well.

Pierre LeBrun: I don’t know about a discount, but yes, there’s a chance that Frederik Andersen stays with the Toronto Maple Leafs. This is a bit surprising given that a lot of people around the situation felt that Andersen was probably for sure headed towards free agency, which could still happen. Claude Lemieux, Andersen’s agent, told me that he spoke with Leafs management on Monday and the question they got from the Leafs is: Is Andersen interested in potentially signing with Toronto and staying put? The answer from Lemieux to the Maple Leafs was ‘yes’. It’s one thing to have a mutual desire to get a deal done and it’s another for it to fit with the Maples Leafs’ cap situation. Sharing the net with Jack Campbell is something that Andersen would be ready to do.

Chicago targeting Hamilton/Jones in ‘B’ Market

Dreger: We need to keep an eye on the Chicago Blackhawks. Media have linked the Chicago Blackhawks to the Buffalo Sabres and Jack Eichel. It’s hard to imagine that the Blackhawks are going to be able to fit in another $10 million forward with Jonathan Toews and Patrick Kane and with Alex DeBrincat not that far down the road. DeBrincat will be a big money guy. I do know that GM Stan Bowman is trying to add an elite-level defenceman, such as Dougie Hamilton, who is a pending unrestricted free agent. Hamilton’s agent has permission to speak to other clubs right now to try and work something out with the Carolina Hurricanes. And, of course, we have the potential of Seth Jones as well, who is in the final year of his deal with the Columbus Blue Jackets. Jones has told the Blue Jackets he is not interested in signing long term. Obviously, Chicago among many teams would love to get their hands on Jones but Columbus GM Jarmo Kekalainen intends on making his decision on his future closer to the 2021 NHL Draft.

LeBrun: All eyes in Colorado are on Cale Makar. He’s not going anywhere, let’s be clear on that. In talking with some different sources around the league I’ve learned that if there’s one player that potentially gets an offer sheet this off-season, some people believe it will be Makar. Part of this is because the Avalanche are juggling a lot of different things. Gabriel Landeskog’s contract is up. We know that Brandon Saad’s contract is up — he may or may not be able to stay. Vezina Trophy finalist Philipp Grubauer is a pending UFA, and, of course, a year from now Colorado needs to be under the cap to sign Nathan MacKinnon to a monster extension. So, what is the contract that makes sense to get Makar to sign long term with Colorado? Make no question about it, Makar wants to stay with the team, but there are some who believe that if Makar’s deal isn’t done right away on July 28 there may be teams that come calling. Colorado internally is guarding against this.

Dreger: CAA Hockey’s J.P. Barry and Pat Brisson, who represent Elias Pettersson and Quinn Hughes, are expected to reconnect with GM Jim Benning and the Vancouver Canucks this week. There are all kinds of options being considered for both Pettersson and Hughes. If you look at Pettersson, something being considered is a three-year bridge that looks something along the lines of Mathew Barzal’s deal with the New York Islanders or Brayden Point’s deal with the Tampa Bay Lightning. Pettersson would also consider a deal similar to Mikko Rantanen’s six-year deal with the Avalanche. Likewise, for Hughes, although, his situation is different because of age. When you look at term with Hughes, expect something in the vicinity of four, five or even a six-year extension with the Canucks.

Tourigny a leading candidate in Arizona

LeBrun: Andre Tourigny, who is a name that’s very familiar to Ottawa Junior Hockey fans and World Junior Hockey fans, is currently in Arizona meeting with ownership. He is the front-runner for the head coaching job with the Coyotes; though, that doesn’t necessarily mean it’s going to get done. Negotiations are currently in the late stages and I believe Hockey Canada is bracing itself for the possibility of losing Tourigny and having to replace him as World Junior coach.