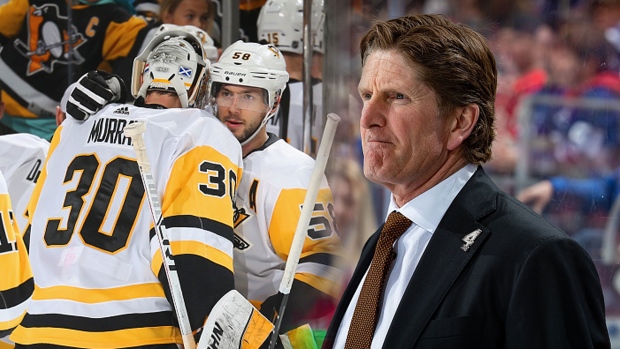 The NHL's free agent frenzy will begin on October 9th this year, and with money tight due to the pandemic and no early negotiation period, it's going to be as unpredictable as ever. Trade winds are also swirling and big names like the Penguins' Kris Letang and Matt Murray have come up in conversations. Hockey Insiders Darren Dreger and Pierre LeBrun discuss the latest rumours around the league in Insider Trading.

The NHL has been talking about a possible Dec. 1 or Jan. 1 start to the 2020-21 season with most of us betting on the latter. Is it looking that way?

Pierre LeBrun: Those are the odds. NHL deputy commissioner Bill Daly joined me on the Two-Man Advantage podcast with Scott Burnside today, James, and I said 'listen, all signs seem to be pointing towards Dec. 1 being less likely,' and Bill Daly said 'well, it depends on what kind of season we're going to have, but if you're going to ask me to handicap it, yes it's less likely than more likely that we're not playing Dec. 1.' So, that's the first public admission of that potential calendar date. Also important is Bill Daly doubling down and saying the NHL still hopes to get a full 82-game season in, even if it means starting in January. I don't know how exactly you get that done, smarter people than me will figure that out, but that's important to note as well. Also, has no real interest in having a whole bubble season. That's not practical. They're going to have to find another way to make money and have a season next year.

Darren Dreger: Before you get to 2020-21 and the start of next season, what that might look like, there's going to be season-ending chaos at the conclusion of the Stanley Cup Playoffs. Teams are in organizational meetings right now around the National Hockey League, especially the cap teams trying to figure out how do they get down to that flat cap of $81.5 million. Beyond that there's another group of teams because of financial situations involving their NHL owners who are looking at an internal cap which is never good news for GMs. And some say that internal cap for a lot of clubs could be in the low 70s.

How does it look as far as the possibility of repeating the format with the bubble at the World Junior Hockey Championship in Edmonton at the end of the year?

LeBrun: I think it's fair to say that the Edmonton NHL bubble has had an impact on people at Hockey Canada. Now listen, I want to stress this, Hockey Canada continues to look at all the possibilities including the status quo, but the reality is the strongest option right now is going to the Edmonton bubble format for the World Junior Championship. That means all the games in Edmonton, that means not having games in Red Deer. Hockey Canada continues to be in talks with the IIHF, who would have to sign off on this. No final decisions taken, but that's sort of where it's leaning right now.

The Washington Capitals are still searching for new a head coach with experience and there's some big names out there.

LeBrun: Well, [Capitals GM] Brian MacLellan kind of tipped his hand when he made the coaching change. He said he was looking for an experienced coach. Well, it should surprise no one that sources confirm he has interviewed Gerard Gallant, he has interviewed Peter Laviolette and, yes, he has interviewed Mike Babcock. And I think he wants to hire one of those three experienced coaches I think within the next couple weeks. Now, all three coaches have term left on their deals with their former teams. In particular, Mike Babcock has more than $17M US left to be paid out over the next three years from the Toronto Maple Leafs. How much would it take for the Caps to pay Mike Babcock for the Leafs to sign off on it if they go that route. We'll see if he goes Gallant, Laviolette or Babcock.

Who does the future of the Pittsburgh Penguins look like this off-season?

Dreger: No, shortage of trade bait with the Pittsburgh Penguins. You're right, Matt Murray is expected to go sooner rather than later. You've got Patric Hornqvist, you've got Zach Aston-Reese, you've got Jack Johnson among those that could be moved. But, there's been some speculation around veteran defenceman Kris Letang and I'm not sure that that is legit. I mean it's OK to talk about specific players outside of Crosby and maybe Malkin in Pittsburgh, but I know Kris Letang wants something clarified. His agent Kent Hughes [is] saying that Kris does not expect to be traded. He might very well be traded, but that's not his expectation. He hasn't said that. Meanwhile in Columbus, a rival of the Pittsburgh Penguins, all trade speculation around Josh Anderson should be on hold, at least temporarily. The Columbus Blue Jackets first need to find out what his expectation is contract wise. Anderson would like to stay in Columbus, but he needs a long-term deal to do that. [GM] Jarmo Kekalainen may not have the stomach for that which might fuel more Anderson trade speculation.