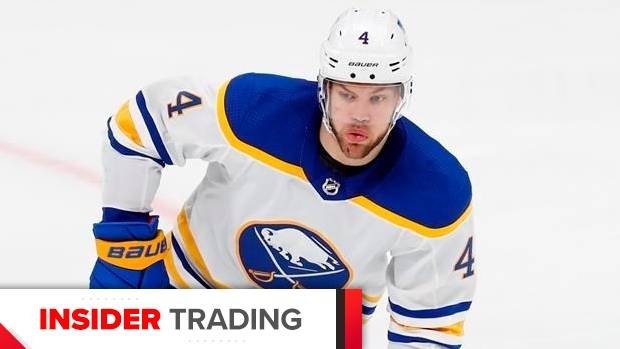 The TSN Hockey Insiders bring you the latest on Taylor Hall, if the Anaheim Ducks would move Josh Manson, what the Blues could do amid a tough season, and if Henrik Lundqvist could return and play this season.

It's been relatively quiet so far but as the deadline approaches clubs are starting to protect their assests. The Devils have held Kyle Palmieri out of the lineup and now, the Sabres are doing the same with Taylor Hall. What's the latest on the Hall front?

Dreger: That's become normal operating procedure for clubs a week leading up to the trade deadline, to hold asset players out for precautionary reasons. And the Sabres are no different. What that tells us is that GM Kevyn Adams has advanced trade discussions regarding Hall. Things have intensified with at least a couple of teams. The Sabres will play four times before Monday's deadline. It's very unlikely that Hall makes it until Monday [before getting traded]. Things are picking up on the discussion front with the Sabres with at least a couple of contending teams.

LeBrun: Hall has struggled with only two goals on the season, although certainly with a team that has struggled around him as well.

One guy who has nine goals and 21 points on the season is Mike Hoffman, a pending UFA who could also be on the move. The St. Louis Blues are not out of contention but we know from GM Doug Armstrong's history, that he's not worried about trading pending UFAs when his team underachieves. He traded Kevin Shattenkirk at the deadline in 2017 despite being in a playoff spot. He traded Paul Stastny to Winnipeg in 2018 despite being a point out, and word is, from talking to different teams around the league, that he's open to potentially moving some pending UFAs. The Blues have disappointed. Hoffman would be one, perhaps Tyler Bozak is another.

Seravalli: From one team in St. Louis who has had a disappointing season to another in the Calgary Flames. And the sense is that all is quiet on the Flames' front at the moment. I think there are a couple teams that are wondering if they might be able to get ahead of the roster reconstructive surgery that seems so apparent in the summer, with guys like Sean Monahan and Johnny Gaudreau. And I think Flames GM Brad Treliving is open to doing just about anything at this point, but deals like that typically wait until the off-season.

In the meantime the Flames are taking calls and have received interest on pending UFA goalie David Rittich. It's been a little bit more quiet for a guy like centre Derek Ryan and some of the Flames’ other lower-priced pending UFAs. But at this point, all things point to probably a pretty quiet deadline in Calgary.

Right shot defenceman always seem to be in pretty high demand and there might be a pretty good one available for the right price?

LeBrun: It's going to have to be a high price. The Anaheim Ducks over the years have really not wanted to take calls on Josh Manson. They really like the guy, they still do. But he has a year and a half left on his deal and frankly, where the Ducks are in the standings and where they're going with the youth movement, they are listening.

They've had a few calls on Manson but teams are going to have to step up. We're talking top prospect and a first-round pick to get your hands on Manson, whose rugged game certainly is accentuated during the playoffs.

Teams that are believed to have shown interest over the last few weeks are Winnipeg and Carolina, but again, they're going to have to pay a price to get him out of Anaheim.

Dreger: Manson is a very interesting name, to say the least, to a number of teams around the NHL. The Jets are most definitely on that list so it's wait and see mode for GM Bob Murray and the Ducks to ultimately make the call on whether he's available or not.

In the meantime, GM Kevin Cheveldayoff and the Jets are trying to figure out who exactly the sellers are. That hasn't been truly defined yet as Cheveldayoff continues to push around the NHL looking for a fit. If that fit doesn't materialize, he may have to lean on something internally like Dylan Samberg or Ville Heinola, but the Jets are still actively chasing the market.

Seravalli: The Washington Capitals have been doing their due diligence on the goaltending market. No secret that they would potentially like to add an experienced, veteran piece. What about one potentially already in house?

Yes, what a story it would be. Henrik Lundqvist has very quietly continued to skate. He is intent on resuming his career after undergoing open heart surgery so long as his health allows. He's awaiting word from doctors this week, a critical appointment that will determine his near-term and long-term future and the Capitals, while everything would have to go right, aren't ruling out a return for Lundqvist this season.