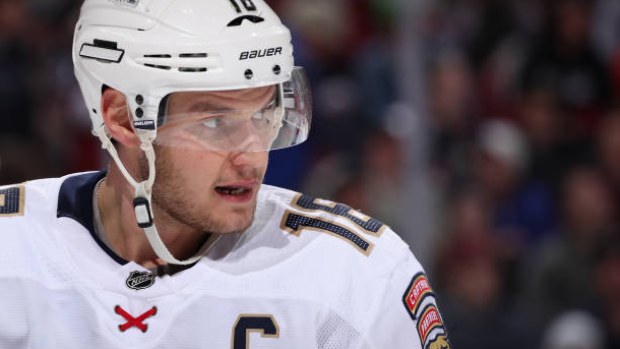 Why are teams calling the Panthers about forward Aleksander Barkov? What options do prospects have to showcase their talents? How will John Tortorella's recent comments affect Columbus' approach to Pierre-Luc Dubois? TSN Hockey Insiders Pierre LeBrun, Darren Dreger and Frank Seravalli discuss this and more.

Aleksander Barkov, the second overall pick from 2013, is drawing some attention.

Frank Seravalli: That would be Aleksander Barkov of the Florida Panthers. I'm told a number of teams have made inquiries to GM Bill Zito over the last number of weeks to check out Barkov's availability. And when asked, Zito said on the record, he wanted to be clear that he has no intention of trading Barkov and that in fact he would like to re-sign him. But, the reason teams are calling is because they're skeptical that the No. 24 player in the TSN Top 50 this year will re-sign with the Florida Panthers when his contract expires in 18 months. So, the Barkov camp at this point says they want to win in Florida. They're going to do everything they can to do that, but they're also going to give Bill Zito every opportunity to put the right pieces in place in order for that to happen. Barkov is going to be a key name to watch over the next number of months.

How about Panthers defenceman Keith Yandle?

Pierre LeBrun: I had an opportunity to speak with the Panthers GM as well, but in this case on Keith Yandle. A developing situation that we touched on Tuesday as well. These are his first public comments for Zito. And what he said is: No. 1, it's up to Joel Quenneville, the head coach, who plays opening night on Sunday, but did admit there's a strong possibility based on what's happened in camp that Yandle does not play opening night. That would end his iron man streak. Why is this all happening? Well step back. Zito has made a number of changes to this organization, both in the front office and with the roster, since he was named GM in September. This is part and parcel with that. He mentioned 'meritocracy, accountability and the vision of having a team that when I put 20 guys on the ice, they are at their best.' So Keith Yandle, falling out of favour. His agent Jerry Buckley, saying this isn't about performance, that it's the GM's attempt to put heat on his client to waive his no-move. Bill Zito saying, "I have not asked Keith Yandle to waive his no-move clause." We'll see where this goes.

With junior hockey sidelined, there's big question marks surrounding draft prospects who want to showcase their talent to NHL clubs. Are there any workarounds?

Darren Dreger: Well, they're talking about some of those options. Right now, it's all picture dialogue involving the National Hockey League because, frankly at the moment, the National Hockey League is more consumed by the start of the National Hockey League regular season. So, what we're talking about here potentially is prospect tournaments before the 2021 NHL Draft. Making sure that, internationally, the under-18 championship is played, likely in Dallas, Texas. But, beyond that on the radar, we talk about this on an annual basis, is the concept of moving the draft age to 19. This is age old, but it seems to have some traction now. Amid the impact of the pandemic on grass roots hockey, particularly junior hockey, but again this is from 30,000 feet and no decision is imminent.

We usually don't have too wait too long before we're talking about something John Tortorella said. So, what's the latest on Tortorella and Pierre Luc-Dubois?

LeBrun: On the one hand you find it endearing every time that John Tortorella will not duck a question not matter how delicate it may be. And in this case on local Columbus radio, No. 1, he confirmed that Pierre Luc-Dubois wanted out which is important to note because the GM and the player in this situation had actually kind of danced around it. Well the coach has put it out there. No. 2, John Tortorella asked on the radio station, 'I don't quite know why he wants out. We got to get to the bottom of this.' So, again, you like the fact that John Tortorella is always honest about these things, but the fact is it doesn't make his GM's job any easier. Jarmo Kekäläinen wants to be patient on this front. That's what other teams are telling us, but this will be heat on it. Pat Brisson, the agent for Pierre Luc-Dubois, no doubt in my mind already has probably talked to the team about this comment from Tortorella. This is an ongoing situation.