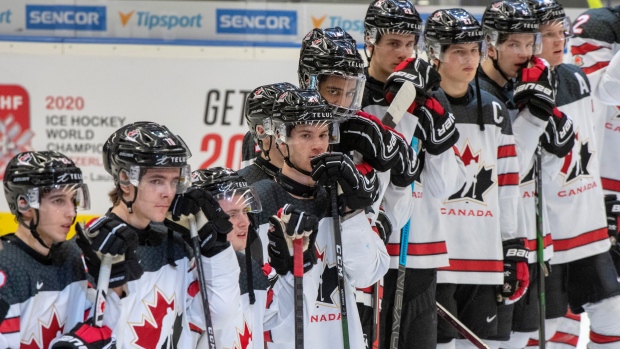 What is the plan to keep the World Juniors on track? And who will be in charge of Canada’s men’s national team for the Olympics in 2022? The TSN Hockey Insiders discuss this and more in Insider Trading.

As Team Canada continues to whittle down its roster ahead of the World Juniors, the pandemic is also knocking out players from a number of different teams. What’s the plan over the next few days in terms of keeping this tournament on track?

Dreger: Everything is progressing in that manner, to keep the tournament on track. Of course it’s disappointing and heartbreaking for some of the individuals, particularly of late in European countries, with a positive test who will not be making their way to Edmonton. I’m told that as we have this conversation, it’s all systems go. Hockey Canada is in constant communication with the IIHF, they will continue to have that communication on Friday and Saturday in preparation for all of the charters carrying these teams arriving in Edmonton on Sunday.

We’re already looking ahead at the possibility of the NHL’s participation at the Winter Olympics next year and has Canada already made a significant decision about management?

LeBrun: You’re not going to hear anything about it officially for a bit and there are a couple reasons for that but Doug Armstrong will be asked to come back and be GM of Canada’s National Team for the Olympics. We know that when we last had a best-on-best men’s tournament, Armstrong guided Canada to a World Cup of Hockey win in September 2016 in Toronto. There haven’t been any best-on-best tournaments since then.

But in the meantime, Hockey Canada is pretty focused on getting through the World Juniors. And also, even though it’s in the CBA between the NHL and NHLPA, it’s still not a slam dunk that NHL players are returning to the Olympics in Beijing, just from the point of view that the NHL still has to negotiate a deal with the IOC at some point in time and that’s not right now. If and when that happens, Armstrong will be the man again to put Team Canada together.

Dreger: No question about that and he will be flanked by experience in Ken Holland, general manager of the Edmonton Oilers, and I’m told that Ron Francis of the Seattle Kraken will also work alongside Armstrong. It’s not top of mind for Hockey Canada and, frankly, this management staff for Team Canada has been working under the radar. They’re already having conference calls. I wouldn’t say an announcement from Hockey Canada is going to happen anytime soon, but ultimately they will get to it in the near future.

Seravalli: What will USA Hockey do as they look to end what will be a 42-year gold medal drought? I’m told they’ve had very minimal discussions for a lot of the same reasons. Until there’s an agreement in place between the IOC and the NHL, that’s when they will begin discussions on who will be their general manager.

There is certainly no shortage of candidates from Jeff Gorton in New York and his top lieutenant in Chris Drury to Bill Guerin in Minnesota and his former boss in Ray Shero, who has a little extra time on his hands. And some senior advisers with plenty of experience in David Poile and Don Waddell. Bill Zito in Florida, the list goes on. No shortage of top candidates for Team USA when they want to make their decision.