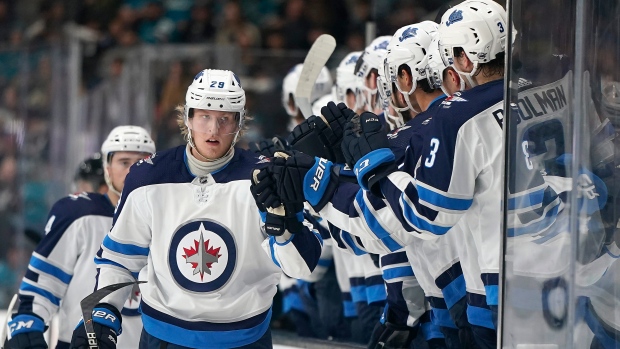 Free agency opens in two weeks, and near the top of TSN's Trade Bait board is Patrik Laine. Is Winnipeg serious about listening to offers for the winger? Which teams would be a fit? TSN Hockey Insiders Pierre LeBrun and Darren Dreger join Gino Reda with more on that, Matt Dumba's situation and more.

Dreger: Absolutely they're serious. Look, I mean, Patrik Laine's name on the Trade Bait board isn't just eye candy or speculative. The Winnipeg Jets know what their needs are. They need a No. 2 centre and they need to bolster the top four on their blue line. And Kevin Cheveldayoff, the general manager, they can't solely rely on free agency. What's curious about this, though, is that there hasn't been a lot of action around Patrik Laine. I mean, everyone in the National Hockey League can recognize that he is a star winger. So maybe clubs don't believe that he is available or they're concerned about the economics moving forward as well being an extension or what an arbitration case for Patrik Laine might look like after next season. One way or another Cheveldayoff is listening on Patrik Laine.

LeBrun: One team that has some interest in Patrik Laine at some level is the Columbus Blue Jackets. Dregs, of course, they got ample salary cap room, they lost a big time offensive threat a year ago when our? Artemi Panarin walked into free agency and never really replaced him. And certainly Jarmo Kekalainen has some insight on Patrik Laine, but what is the price? And I think they're kind of sitting in the weeds right now because of that. The Carolina Hurricanes, I'm told, are a team that have had a conversation with the Winnipeg Jets about Patrik Laine, but it didn't get very far. I don't know that the Hurricanes feel there's a fit there at this point. A team that could certainly use some elite scoring on their top line would be the Montreal Canadiens. But I'm told at this juncture that the Montreal Canadiens don't intend to get in on the Laine sweepstakes.

Reda: All right, then let's move to No. 2 on Frank's list. Matt Dumba. We've heard how high Craig Button is on this 26-year-old right-handed d-man. Darren, what do you think the Wild are asking for Dumba? And could the price be too high?

Dreger: Well, it could be. In a perfect world Bill Guerin would love to land a No. 1 centre, even a No. 2. And that doesn't appear to be reality at this situation at this point, unless something situationally changes. So, Guerin is at least willing to listen to a softer deal and that's future considerations. It would have to be a higher first-round draft pick and a good young NHL roster player. And the flip side is the Minnesota Wild could hold onto Matt Dumba. They're not giving him away unless the asking price is met.

LeBrun: Alex Pietrangelo found himself on Frank Seravalli's Trade Bait board and you may ask why? I mean, he's a UFA on October 9, why would you trade for him? Well, you trade for him if you're a cap-challenged team that thinks that getting the eighth year in that contract will make that much of a difference on the AAV. And certainly, if the Blues cannot break the stalemate with Alex Pietrangelo, I do believe that they will entertain offers on a sign-and-trade involving Alex Pietrangelo. It's a complicated thing. I've been hoping for one for years. John Tavares and the Leafs talked about it a couple of years ago, it didn't happen. Let's see if it does this time around.

Reda: Here's an interesting story. Washington Capitals captain Alex Ovechkin, a year away from being an unrestricted free agent and Pierre, it looks like Ovechkin is going to do all the work himself to negotiate a new deal.

LeBrun: Well, I guess he's got to do what his buddy Nick Backstrom did. Backstrom, as you may recall, signed his own contract, negotiated and signed his own extension back in January with the Capitals. Well, I'm told that Alex Ovechkin is representing himself. There's no lawyer that he brought in. There's no one else in the room. It's just him - talking to the Caps front office right now. We'll see if he gets a deal done this off-season. But there have been preliminary discussions about the future, about what a future contract would look like for him. And it's him handling it by himself.

Reda: And with the Stanley Cup now just days away from being awarded, the question is when are we going to be back on the ice? Darren, the NHLPA will no doubt play an active role in some of the crucial decisions for the opening of the new season. What steps are they take him to get ready for that?

Dreger: Well, the NHLPA, Gino, is creating a committee as we speak no different than the return to play committee prior to the National Hockey League getting back onto the ice and the NHL players will once again be involved. And they'll be getting negotiations with the National Hockey League at the conclusion of the Stanley Cup final to go through a myriad of challenges that they face before they drop puck on 2020-21.