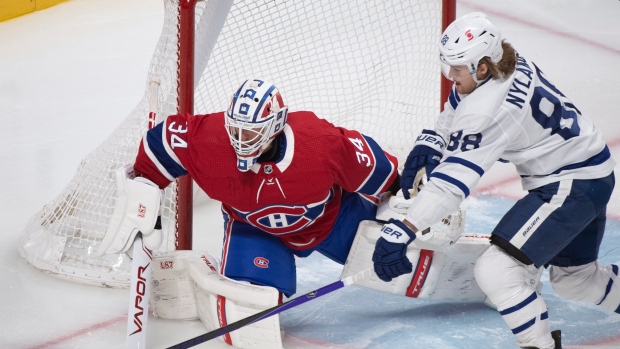 The betting lines have been adjusted and recalibrated. So, it seems fitting on this jam-packed weekend to predict that a trio of favourites playing at home will blast their feebler foes.

To whittle down the price, it is necessary to bet that these victories will occur in regulation time, but they are wagers worth taking.

If you haven’t heard, allow me to fill you in. The New York Islanders’ record since the injury to Anders Lee is underwhelming. Despite the acquisition of Kyle Palmieri and Travis Zajac at the trade deadline, the Islanders have been an under .500 team.

Thursday night marked the Islanders’ third consecutive loss. The first two L’s were against East Division bottom-feeder Buffalo, and now the Islanders are glumly facing another series sweep, but this time in their own building against the hapless New Jersey Devils. Is the sky falling in Long Island?

Thursday’s contest seemed fated for an Islanders’ rout if a viewer watched only the first eight minutes. The Devils were benevolently forfeiting the puck to the Islanders in their own end. New Jersey forgot or failed to pick up men in the slot a handful of times. The Islanders cruised through the neutral zone and found passing lanes. But they failed to convert on their chances, and soon New York’s demons crept into the frame.

The Islanders struggled on their breakouts and with puck management outside the offensive zone. Gaps were baggy. And this sloppiness had an impact, as New Jersey’s goal by Pavel Zacha was fuelled by a turnover in the neutral zone, followed by another turnover on the breakout, and finally defenceman Nick Leddy failing to close on Zacha in the slot.

The Islanders’ postseason outlook may look increasingly unsettling, but that doesn’t matter to this discussion. Grabbing the Islanders on Saturday in regulation, at -155, is renting, not buying. There are strong reasons to bet on a vigorous response by the Islanders to their recent dismal play.

In their three defeats, the Islanders posted a 55.77 and 53.85 per cent expected goals and high-danger chances percentage, respectively. They also are 20-4-3 at home and have not lost four straight games since January.

In addition, consider the opposition. From the end of March to the end of April, the Devils lost 14 of 15 games. They have won five of their last six, but the true New Jersey probably lies somewhere between these extremes.

Plus, the Devils have injuries, which may mean they will be without their leading goal scorer, Miles Wood, as well as two 20-minutes-a-game defencemen in Ty Smith and P.K. Subban. When comparing possible goaltending options, the Islanders have a distinct advantage over what the Devils can offer as far as Goals Saved Above Expected (GSAx). The last time the Islanders dropped three straight, they proceeded to wax the Rangers in consecutive shutouts. I encourage grabbing the Islanders at the regulation-time price.

With all games confined to divisional play, every team is captive to provincialism. The Toronto Maple Leafs are the big fish in the smallish pond that is the North Division. They have been wildly successful against Winnipeg, Edmonton and Montreal, but we don’t get to see them against the best of the other divisions.

We have been unable to fully judge the Maple Leafs due to the lesser competition in their division. We know they are good, but they may be great. What seems likely is there is a massive gap between Toronto and a depleted Montreal squad. One reason is the Leafs’ diversified offence, which was on full display against Montreal Thursday night. Toronto produced its first two goals off the forecheck before notching two more after rapid breakouts that caught three Montreal forecheckers deep.

Elite skill at forward will always suck up the most attention, but what portends a deep playoff run, and made deli meat of Montreal, is Toronto’s puck management and ability to win pucks in the corners and battles around the crease. (The Maple Leafs’ sparkling metrics certainly bode well, too.) Toronto’s speed had Montreal retreating on entries, and once the Maple Leafs got into the offensive zone, the Canadiens were left flailing as they tried to get the puck back.

The silver lining for the Canadiens is they are almost certain to make the postseason, even if they limp through the front door. The bad news is they look exhausted from a brutal end-of-the-season schedule and are besieged by key injuries. Also, their roster talent pales to Toronto’s.

At 5-on-5, the Canadiens rank second-to-last in goals per 60 minutes in the NHL over their last 10 games. In high-danger chances over that stretch, they rank just outside the bottom-five worst. Signs of deterioration are especially prominent in high-danger chances created, where they rank ahead of only the St. Louis Blues, Vancouver Canucks and New York Rangers.

The Canadiens are still fighting to clinch their playoff berth and avoid playing Toronto in the first round, so there is no shortage of motivation. But Saturday night will be their third game in four nights, and it comes on the road in Toronto.

Toronto’s agency to set matchups due to last change, coupled with how difficult it is for Montreal to spend sustained time in the Toronto’s end, means the Maple Leafs in regulation time is at an affordable number.

Stopping Edmonton’s Connor McDavid and Leon Drasaitl is a complex, nearly intractable problem. Vancouver approached its four-game series against Edmonton with a simple tactic: take away the middle of the ice. But the validity of that approach was shredded in Games 1 and Game 2 on Monday and Tuesday night.

The Oilers nearly doubled the Canucks in shots and produced four 5-on-5 goals to Vancouver’s one when McDavid and Drasaitl were on the ice. In the two games in Vancouver, the Oilers outscored the Canucks 9-4.

Then Thursday happened. A cursory glance at Game 3 in this series suggests that Oilers goaltender Mikko Koskinen torpedoed his team in the first period and it never recovered. While that is true, it fails to tell the whole story. Vancouver deserves plaudits for successfully limiting the Oilers’ rush attack and compelling them to forecheck. The Canucks wanted to slow the game down and put pressure on a wobbly Oilers’ defensive group, and they achieved that end.

The Oilers are unhealthily dependent on their superstars to drag them to victories, but there are grounds for believing that won’t matter on Saturday night because Vancouver is an inferior and flawed opponent. At 5-on-5, the Canucks rank in the bottom five in the NHL in expected goals and high-danger chances.

There were glimpses of the Canucks’ struggles to control play that cropped up in the first two games. The Oilers trapped the Canucks in their own end and then toyed with Vancouver by using lots of high cycle and interchanges with Edmonton’s defencemen. Vancouver was plagued with puck-management issues and struggled to limit Edmonton to one-and-dones. The Oilers’ power play also looms as a trump card, and it proved the difference-maker on Tuesday night.

Moreover, after Koskinen tanked on Thursday night, a start by Mike Smith on Saturday seems highly likely, giving Edmonton a goaltending advantage. Since April 1, Smith has a 5.16 GSAx, sixth best in the league during that stretch among goaltenders with four or more starts. For Vancouver in that span of time, Braden Holtby has outplayed Thatcher Demko, but neither has been as sharp as Smith.

The Canucks are virtually incapable of winning once they fall behind, so for Vancouver to win they need to keep a lead while winning on the road twice in a row, despite being a pitiful away team all season. To get the Oilers at a reasonable price, bettors need to engage the regulation-time line.