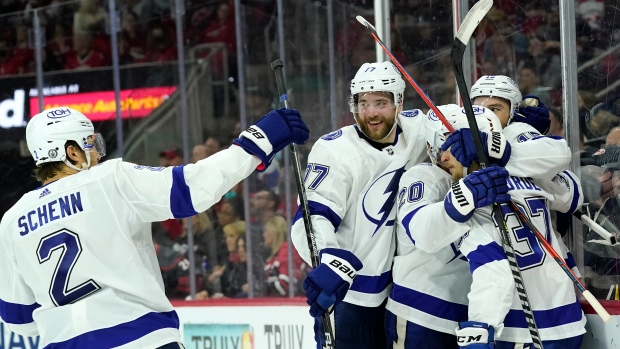 A hallmark of the NHL playoffs is that, until it concludes, all wins are fleeting moments of joy. Under pressing logistical constraints, the next game is almost always 48 hours away or less. Both of Saturday’s games are between teams dusting themselves off from an overtime bout. But there is barely a moment to reflect because it is time to hit the reset button.

When we look back on the 2021 NHL playoffs seven weeks from now, Thursday night’s 3-2 overtime triumph by the Carolina Hurricanes may be significant only because it was a pyrrhic victory. Carolina grabbed a must-win game, but suffered another costly injury in the process, and the sirens of alarm are wailing.

In Games 1 and 2, the Hurricanes planted a thicket of bodies in the neutral zone as a way to ensnare and bog down the Lightning rush. Carolina’s defencemen stepped up in the neutral zone, like safeties defusing a pass to the slot receiver across the middle. Tampa Bay was compelled to forecheck against an industrious defensive group, and it struggled to get shots through against Carolina’s tight gaps in defensive coverage.

The Lightning responded with stretch passes and by asking their defencemen to aggressively pinch. But they won both games because of better goaltending. At 5-on-5, the Lightning flopped in expected goals, but fared better than the Hurricanes in high-danger chances. Meanwhile, the injuries for Carolina began to accrue. First, Nino Niederreiter was injured before the series started. Then Vincent Trocheck. But Game 3 could prove unusually influential because Tampa Bay may have cracked the Carolina riddle despite losing.

On Thursday night, the Lightning cribbed from the Nashville Predators’ playbook. Part of the reason Nashville experienced success against Carolina was by forcing the Hurricanes to box them out in the low slot and by throwing pucks on net from every angle from below the circles. The Predators scored goals and won games in the first round because they sought out sequences where bodies clustered around the net had to wrestle for the puck.

The Lightning finished Game 3 with a blistering 2.55 expected goals and they equalled the number of high-danger chances they had collected in the first two games combined. The top-nine forwards shrewdly attacked off the goal line, initiating a confrontation in the low slot. They sought out playmaking opportunities from behind the net. And chances piled up, as Carolina lost one-on-ones to Tampa Bay forwards. On the Brayden Point power-play goal, a penalty by Sebastian Aho was precipitated by Ondrej Palat hammering away at the puck around the crease.

During the regular season, the Lightning won 75 per cent of their games on home ice. Losing consecutive games there seems unlikely. Carolina goaltender Petr Mrazek played very well in Game 3, but the Lightning’s first three forward lines dominated the Hurricanes in high-danger chances, a terrifying thought. The Hurricanes need to be on their best behavior to avoid putting the Lightning on their deadly power play.

With injuries mounting for the Hurricanes, the Lightning appear to have an approach that allows them to effectively attack Carolina on the cycle. Add in Andrei Vasilevskiy and the power play, and it’s hard not to love the Lightning’s chances.

Hurricanes coach Rod Brind’Amour knows it. With three of the Hurricanes’ top-nine forwards possibly missing from Game 4, scoring at 5-on-5 against the Lightning will be like running through quicksand. The absences of Niederreiter, Trocheck and Warren Foegele – assuming they all don’t play – cannot be overstated.

During the regular season, Niederreiter finished first on the Hurricanes in expected goals at 5-on-5. Trocheck was fourth. Both were top-five players in shot attempts per 60 minutes. Foegele was fifth. Through three games, the Hurricanes have mostly stuck to script, so if these three forwards are not playing, they will be attempting to grind the Lightning down with lesser players in the starters’ stead.

The Hurricanes have identified two areas of Tampa Bay weakness to try to prey on. Carolina has been disruptive to the Lightning on breakouts. Especially in the first two games, the Lightning defencemen squirmed under the pressure of the Hurricanes’ F1 on the forecheck, leading the Lightning to struggle to connect on their passes to their outlets and providing extensive zone time to the Hurricanes.

Carolina posted more shot attempts than Tampa Bay in both Game 1 and 2. But in Game 3, that began to shift. The Lightning held the Hurricanes to 46 shot attempts in nearly 59 minutes of ice time. If Tampa Bay has solved, or even just reduced Carolina’s forechecking pressure, that is a bad omen for the Caniacs.

Another avenue Carolina has been pursuing is producing rush looks that capitalize off the Lightning defenceman holding the blue line on the strong side. With inconsistent back pressure from Tampa Bay, Carolina has found room on odd-man rushes, or at least room in transition to challenge Vasilevskiy.

But fear not, because Tampa Bay has complete agency to fix this. If the third forward covers over the top and gives adequate effort back-checking, those chances by Carolina evaporate. The Lightning could plug an inconvenient hole. It is also worth underlining that Tampa Bay has arguably the best player left in the playoffs in Vasilevskiy, who leads all postseason goaltenders in Goals Saved Above Expected (GSAx).

At 5-on-5, Tampa Bay is trending toward being the better team. If the Lightning exercise a modicum of discipline and avoid needless penalties, they should be able to blunt a dulling Hurricanes’ offence. I think Vasilevskiy could hold Carolina to one goal or shut them out. Two goals or less feels like stealing.

An argument in favour of the New York Islanders winning Game 4 can be distilled to two words: Semyon Varlamov. That is it! If one chooses the home underdog, the reasoning sits squarely on this goaltender’s shoulders. In contrast, the logic for backing Boston has more grist and a larger margin for error.

To be blunt: The Bruins are faster and deeper. Boston is badly outplaying the Islanders, outshooting them at 5-on-5 in every game. In expected goals and high-danger chances, the Bruins crushed the Islanders in Game 1, although the gap narrowed in the next two games.

Game 3 deserves a closer look. First, the David Krejci line imposed itself, registering 10 shots for Boston while allowing zero at 5-on-5. It produced three high-danger chances while surrendering zip. This was the much-coveted scoring balance that Boston traded for at the deadline, with Taylor Hall as the catalyst. The Patrice Bergeron line stomped all over New York in the first two games, tripling its adversary in 5-on-5 shots and potting two goals. But in Game 3, Krejci, Hall and Craig Smith ran amok on the rush, which led to the first goal by Smith.

The Bruins had a relatively listless first period despite scoring the game’s first goal, but in the final two periods they found offence in all varieties: off the rush, on the forecheck, on counterattacks. The Islanders struggled to defend the Bruins in transition, allowing a bevy of prime looks from the slot. New York also spit out the puck on breakouts and when trying to ferry the puck toward the Bruins’ end. It is revealing that not a single Islanders line finished with more shot attempts or shots on goal than its Bruins counterpart at 5-on-5. On Brad Marchand’s overtime goal, the entry for Charlie McAvoy couldn’t have been more yawning.

For a New York team lauded for its defence, this may be surprising. There are culprits to highlight, one of which is the Nick Leddy and Scott Mayfield duo, who have played the most together of any defensive duo on the team. Coach Barry Trotz may want to consider splitting it up. In 39:19 of ice time, Leddy and Mayfield have a 24.19 expected goals percentage and 14.29 high-danger chances percentage. That is so atrocious as to be borderline unheard of. They can thank their goaltenders, Varlamov and Ilya Sorokin, for masking some of their putridity.

The Islanders’ goaltenders are keeping the games competitive. Nevertheless, Boston’s Tuukka Rask played a fine Game 3, and with the advantages the Bruins enjoy, they are the pick for Game 4.