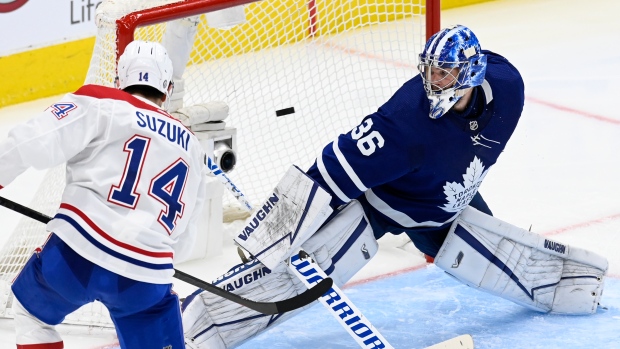 With one foot in Round 1 and the other in Round 2, the NHL playoffs continue apace. On Saturday, opportunity knocks, as the possibility looms to cash in on the Toronto Maple Leafs bludgeoning a weaker foe, along with backing the Boston Bruins in their prison brawl against the New York Islanders. Should be a heck of a weekend. Remember to drink water, too.

The criticisms that hurt most are those that are true. The Maple Leafs have opened the last four games with power forward Wayne Simmonds on the top line with Auston Matthews and Zach Hyman, an implicit acknowledgment that Toronto was too soft in Game 1. Still, in Game 5 the Canadiens pushed the Leafs around, most blatantly when Montreal brought the fight in front of Toronto’s net.

Montreal’s mandate was clear from the get-go: apply pressure on the forecheck and create battles in the low slot. It worked! The Canadiens held a 3-0 lead, largely because of this mentality.

On the second goal by Joel Armia, the Canadiens were outmanned in a scrum in front of the net, but still were able to poke the puck past Toronto goaltender Jack Campbell. On the Jesperi Kotkaniemi tally, Kotkaniemi ripped the puck away from Rasmus Sandin and slammed it into the net.

Protecting a 3-1 lead in the final frame, Montreal retreated into a cautious defensive posture, enabling Toronto to claw back and tie the game. Toronto posted an expected goals of 67.9 per cent in the third period. But this should not eclipse what occurred in the first two stanzas, where the Canadiens succeeded by keeping tighter gaps and smushing the Maple Leafs on the forecheck.

When the Maple Leafs did get their chances, they were halted by Montreal’s Carey Price, who allowed only three goals despite Toronto manufacturing 15 high-danger chances. Previously, the greatest high-danger chances in a game by either team was 10.

In stretches of this series, the Canadiens have demonstrated that they can limit the Leafs’ speed through the neutral zone and contain the entries by Toronto’s skilled forwards, unquestionably assisted by Price as a sturdy backstop. But Montreal has been utterly flummoxed when Toronto tugs its forward up high for a give-and-go; in that scenario, the Montreal defensive coverage has completely unraveled.

In Game 3, a Mitch Marner-Matthews give-and-go led to a panicked Montreal icing, providing Toronto the opportunity to put a fresh line on the ice, resulting in William Nylander scoring. Morgan Rielly’s goal in Game 3, as well as Zach Hyman’s in Game 5, came off Rielly and Marner’s give-and-go action. On both markers, the goals came against a Danault-less forward trio. With Montreal having last change, it has the ability to use Danault for those defensive-zone faceoffs against Matthews.

The baggage of not having won a series for nearly two decades is an eyesore Toronto is desperate to shed. With Montreal getting to play in front of fans again, Game 6 offers can’t-miss television. While a current of schadenfreude will be easily detectable if Toronto flails early, the talent advantage the Leafs enjoy ensures a comfortable victory. With Price as a possible equalizer, grabbing Toronto to obtain a victory at -185 moneyline, in case the game goes to overtime, is the savvy move.

The Islanders don’t care if they impress you. After New York galumphed into the second round of the postseason despite less than stellar numbers, its series against the Pittsburgh Penguins, the most boisterous of Round 1, is worth reflecting on.

In six games, the Penguins largely controlled play. They outshot the Islanders by 44 shots at 5-on-5 and walloped them in shot attempts. The Penguins bested the Islanders in expected goals and high-danger chances. Pittsburgh finished the series converting on 25 per cent of its power plays and registered a respectable 81.3 penalty kill percentage. Ultimately, Pittsburgh had a glitch in its system: goaltender Tristan Jarry. The Islanders’ better play in net accelerated a memorable collapse by the Penguins.

Against the Bruins, the Islanders meet an opponent of a similar persuasion. Both teams don’t allow goals and thrive at faceoffs. Each franchise was aggressive at the trade deadline. And as far as comportment, each will punish its opponent with physicality, especially imposed through the forecheck. But the Bruins present several glaring problems for the Islanders, which makes Boston the moneyline pick on Saturday.

First, the Islanders may find themselves prisoners in their own end. In the Pittsburgh series, the Penguins did a nice job of sealing the boards when New York was trying to exit its own zone. The Islanders’ lack of mobility on defence is a wart, and the Islanders will revert to flipping the puck out of their own end when direct passing fails. A team like Boston that can assemble and strike with precision and thunder is primed to paste New York on neutral-zone regroups.

Second, the Islanders’ Ryan Pulock-Adam Pelech defensive pairing is getting lauded for its play, but the process has been rockier than advertised. In almost 100 minutes of 5-on-5 play, this defensive duo is allowing high-danger chances at the alarming rate of 13.36 per 60 minutes. In expected goals against, the number for Pulock and Pelech is far above their regular season clip, but less gruesome than their high-danger chances rate.

Another concern for the Islanders is taming the Bruins’ transition game. Boston is possibly the most active team in the NHL at having its skaters without the puck create room for the puck-carrier on the rush.

This tactic is especially true with the Bruins’ Perfection Line, where the Boston forwards without the puck will use a variety of cheeky ways to push the opposing defencemen back, thus staggering the rush so there are multiple waves and even the possibility of a cross-seam pass. Considering that the Islanders closely hew to a three-man forecheck, the impetus will be for them to consistently apply back pressure. I’m dubious, as Pittsburgh exposed the Islanders’ flagging transition defence on many sequences.

The Islanders have too many flaws the Bruins can expose. I hate the moneyline number at -180 for Boston, but New York’s Illya Sorokin makes the regulation-time line an even worse option.

The Bruins know how to make their adversaries’ lives miserable. In Round 1, when the score was within one, the Bruins had the best high-danger chances against per 60 minutes of any team in the playoffs, partly because the Washington Capitals struggled to leave their end to earn quality looks. And when the Capitals did, those entries proved to be one-and-dones. A demoralized and battered Washington would crumble as a result.

The limitations of the Islanders’ offence might mean a lot of possession time staring down a thicket of bodies. A potential exception would be the Brock Nelson line, which proved a boon against Pittsburgh, scoring seven goals at 5-on-5 and catalyzing the team with its dynamic rush attack. But Pittsburgh effectively swallowed the Mathew Barzal line, and with Boston having the last change in Game 1, the Bruins can deploy their Perfection Line against the Nelson line and erase it from existence.

What the Patrice Bergeron line yielded in the Capitals series is wild. They almost doubled Washington in 5-on-5 shots against and posted an unearthly 72.30 expected goals percentage. So, the Nelson line could potentially be dominated. Worse yet, if Boston coach Bruce Cassidy chooses to, he could impose the Charlie McAvoy and Matt Grzelcyk defensive duo against the Barzal line and wreak havoc on the Islanders’ top-six forwards.

Unlike Pittsburgh, which started a goaltender who can’t save shots on his glove side, Boston’s Tuukka Rask finished the first round with a 2.77 Goals Saved Above Expected (GSAx). Confronting one of the league’s best goaltenders in the playoffs in GSAx could cause a big difference in the Islanders’ goal output.

The Bruins may score more than the Islanders, but we have seen the best from Sorokin and it is spectacular. If the Islanders can stay out of the penalty box, they are capable of holding Boston to only a few goals, in part due to their layered defensive coverage in their own end. To jump at an Under 5.0 goals total, the price and conditions need to be right, and at +110, the odds for this game meet that criteria.