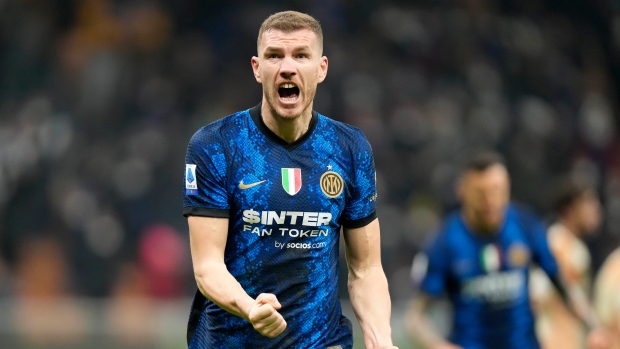 It was Džeko’s first goal since the beginning of December. Nicolò Barella had canceled out Thomas Henry’s shock opener for Venezia in the first half.

“When you score in the last minute, it’s normal to celebrate in a frenzy,” Džeko said. "The team had certainly missed my goals, but the most important thing is winning. It was wonderful to score in the 90th minute.

“There are no easy matches in Serie A. We’ve seen that today and it was one of the toughest games of the year."

Defending champion Inter consolidated its lead ahead of the eagerly anticipated derby match against second-place AC Milan after the international break.

Inter players were wearing special edition jerseys to mark Chinese New Year, with the names of the players in Chinese lettering. The club is owned by Chinese retail giant Suning.

Venezia was depleted by the coronavirus and made the trip without eight players and several members of staff, including coach Paolo Zanetti, who had all tested positive for COVID-19. New Serie A rules that came into place recently state that a match will be postponed if nine players out of a list of 25 squad members are out with the virus.

But it was the visitors who took a surprise lead in the 19th minute when Ethan Ampadu whipped in a fantastic cross to the back post and Henry headed it in off the underside of the crossbar.

Venezia defended well and it took Inter until five minutes from halftime to equalize. Visiting goalkeeper Luca Lezzerini did brilliantly to parry Ivan Perišić's volley from close range but Barella slid in to fire home the rebound.

Venezia was left fuming as it felt there was a foul by Inter forward Džeko on Marco Modolo in the buildup — leaving the defender with a black eye — but the goal was awarded after a VAR check.

Inter wasted several chances to take the lead in the second half. Just when it appeared as if the Nerazzuri would pay for their profligacy, Džeko — who had been guilty of most of those misses — headed in Denzel Dumfries' cross in the final minute.

Atalanta also had several players out with COVID-19 for its match at Lazio but it managed to pick up what could prove to be a precious point in a 0-0 draw.

Atalanta remained fourth but only two points ahead of Juventus, which visits Milan on Sunday.

A balanced match burst into life in the 64th minute when a fierce shot by Lazio midfielder Manuel Lazzari crashed off the left post.

Atalanta also had its best chance of the game moments later when, following a counterattack, Aleksei Miranchuk curled narrowly wide.

Genoa showed clear improvement in its first match under new coach Alexander Blessin in a 0-0 draw against Udinese.

Blessin, who replaced the fired Andriy Shevchenko on Wednesday, is Genoa’s third coach of the season.

Genoa was aggressive from the start although hopes of getting all three points diminished 11 minutes from time, when Andrea Cambiaso was shown a second yellow card for dissent following a booking for a foul.