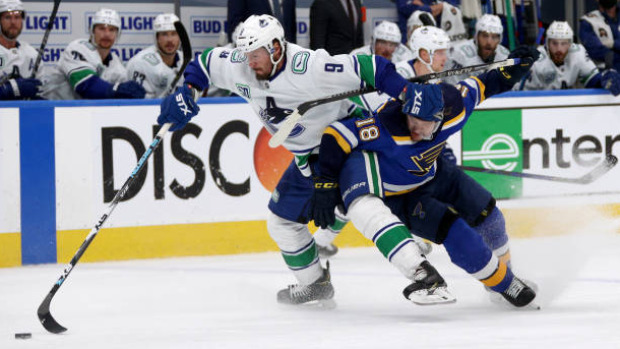 For more than a year now, the Vancouver Canucks young core – anchored by forward Elias Pettersson and defenceman Quinn Hughes – has been looking for a statement victory. In their first playoff game on Wednesday night, they got it.

There were a few important takeaways from Game 1. First and most importantly: Vancouver clearly belongs. This was not an inexperienced team that looked rattled. In fact, I thought they did an excellent job of using their speed on the wings to effectively counterattack St. Louis on a number of occasions, an important development considering the Blues’ ability to own the puck for extended periods of games.

Other things that were encouraging: The power play was on fire (Pettersson, Bo Horvat, and J.T. Miller all scored while up a man), and Jacob Markstrom clearly looked more comfortable than Jordan Binnington.

If there was one area of concern, it was at 5-on-5. Right before the dam broke early in the third period, the Blues were really starting to lean on Vancouver – utilizing their vicious forecheck to beat the Canucks blueline deep into their own zone. The trio of David Perron, Ryan O’Reilly and Zach Sanford may have been the best unit for either side at even strength: 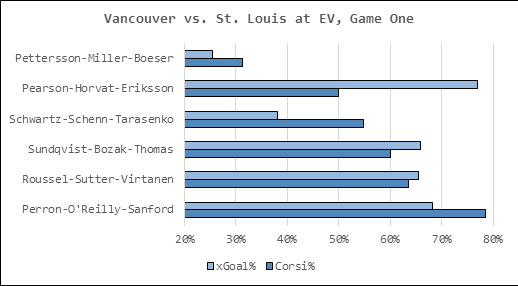 It wasn’t a problem in Game 1, thanks to a few phenomenal individual plays, a sizable goaltending advantage and some fantastic power-play work that was a continuation of the kind of success we saw all season long.

But Craig Berube throwing his best line at Vancouver’s top unit was an effective strategy, even in an otherwise losing effort. The Pettersson, Miller, and Boeser line didn’t generate a single shot from the “high-danger” area of the ice, in large part because they were working so feverishly to win the puck back and break out of the defensive third.

This was by design on the St. Louis side, no question about it. Berube rotated his top two defensive pairings – one anchored by Alex Pietrangelo, one by Colton Parayko – behind the O’Reilly line to slow down Vancouver’s big guns. The rest of the St. Louis lineup, as a result, didn’t see much of the Pettersson line: 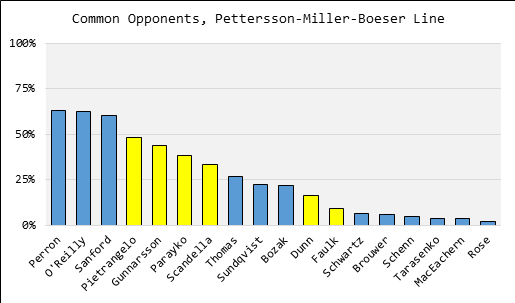 Berube didn’t have to go deep into the playbook to figure out putting his best line – a line that is very capable on both ends of the ice – would be an effective mitigation strategy for Vancouver’s top scorers. But few groups have been able to take the Pettersson line out like that at even strength.

Part of the reason Vancouver was an intriguing upset pick here, and why they were successful during the regular season, was the direct result of the team’s ability to form a very formidable top line. The trio was light years ahead of the rest of the Canucks and most other lines around the league.

When Vancouver’s top line wasn’t driving the team across the finish line – well, those generally were the games that the Canucks lost this season: 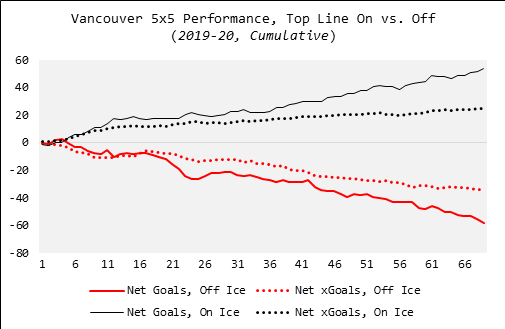 This shouldn’t take anything away from Vancouver’s win – special-teams play matters, goaltending advantages matter even more, and if Vancouver’s depth players hold up better than expected (they certainly did in Game 1), this becomes less of an issue.

But it’s also a great example of something that I’m sure Green and the rest of the Canucks organization is dissecting after celebrating Wednesday night’s win. For this team to beat St. Louis and make a deeper push into the Stanley Cup playoffs, they are going to need to free up their most dangerous weapons in the offensive zone as much as possible.

The Blues looked rough in Game 1, but the fact that they were able to successfully slow down the Canucks top line at even strength could be a harbinger of a lengthy series to come.

The chess match continues on Friday.