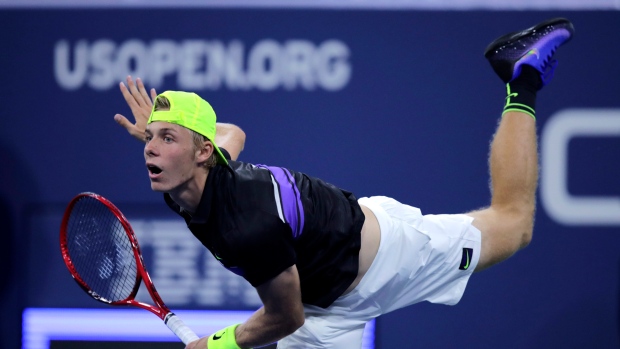 A most unique Australian Open offers several intriguing storylines for the seven Canadians in the singles field.

Vasek Pospisil is brimming with confidence after being named the ATP Tour comeback player of the year.

Shapovalov, Milos Raonic and Felix Auger-Aliassime, meanwhile, are all seeded and appear to have the potential for a strong run Down Under.

"Possibly a breakout performance, meaning a Grand Slam final, for one of them," said tennis broadcaster Robert Bettauer, a former national team coach. "It's not out of the question."

Raonic reached a Slam final in 2016, falling to Andy Murray at Wimbledon. Andreescu became the first Canadian to win a Slam singles title in 2019 when she beat Serena Williams at the U.S. Open.

With only a handful of active COVID-19 cases in the entire country, Australian Open organizers are planning to let in 30,000 spectators each day. That's about half the usual number at the event.

A 14-day quarantine behind them, players will begin first-round play Monday (Sunday evening Eastern Time) at Melbourne Park. Preparations were further hampered this week when a hotel worker tested positive for COVID-19, forcing a one-day pause at warm-up tournaments.

"Tennis players really have to constantly manage and adjust and adapt to their environment," said Bettauer, the CEO of the Pacific Institute for Sport Excellence. "This is extraordinary of course.

"But I think most players will very quickly go into adaptation mode."

Shapovalov, the No. 11 seed from Richmond Hill, Ont., should have his hands full with the 19-year-old Sinner, the highest-ranked teenager on the ATP Tour at No. 36. The Italian reached the quarterfinals at the most final Grand Slam of 2020 — the French Open.

Auger-Aliassime also has advanced to the semifinals of a tune-up event in Melbourne.

Pospisil, from Vancouver, was saddled with a tough draw. His first-round opponent is fourth-seeded Daniil Medvedev of Russia.

Raonic could meet top-seeded Novak Djokovic of Serbia in the fourth round. A third-round showdown between Shapovalov and Auger-Aliassime is also a possibility.

"I don't feel like I have too much pressure on my shoulders," Andreescu said Friday from Melbourne. "Yes, I'm seeded, but I haven't played in so long.

"I just want to go out there and play where I have the mindset I'm so goddamn grateful to be on the court."

Andreescu, from Mississauga, Ont., confirmed on the video call that she suffered a torn meniscus at the WTA Finals in October 2019, a couple months after winning the U.S. Open.

She chose to focus on training last year rather than return to the WTA Tour when play resumed after a pause due to the pandemic. Andreescu has practised regularly for the last nine or 10 days since the quarantine period ended.

"I feel her level is getting back slowly to where it needs to be," said coach Sylvain Bruneau. "But it's going to be a totally different experience to go back to competing. I just have a lot of confidence in her, just in her skills to handle that kind of pressure situation.

Bruneau tested positive for COVID-19 after arriving in Australia. He said he had a fever one night while in quarantine but is feeling "really well" now, choosing to keep his comments on the subject to a minimum.

The 18-year-old Fernandez, the world No. 89 from Laval, Que., will open against 18th-seeded Elise Mertens of Belgium.

Marino, who took a five-year break from the sport before returning in 2018, faces Australian wild-card entry Kimberly Birrell.

This report by The Canadian Press was first published Feb. 5, 2021.