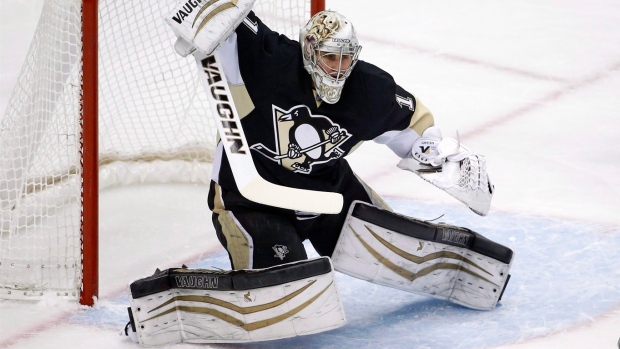 The Islanders announced the moves on Wednesday, the opening day of free agency in the NHL.

Hickey got a three-year deal in re-signing with the Islanders. Greiss was given a two-year contract after playing 20 games with the Penguins last season. Petrov, a third-round draft pick in 2008, got a one-year, entry-level deal.

Hickey has seven goals and 41 assists in 202 career NHL games, all with the Islanders. The Calgary native led all Islanders defencemen in games last season (81), set a career high in assists (20) and matched his career high in points (22).

The Los Angeles Kings selected the 26-year-old defenceman in the first round of the 2007 NHL Draft. He was claimed off waivers by the Islanders in January 2013. He was an unrestricted free agent.

Greiss posted a 9-6-3 record with a .908 save percentage and a 2.59 goals-against average with the Penguins. The German played 25 games the previous season with the Phoenix Coyotes.

The San Jose Sharks selected Greiss in the third round (94th overall) of the 2004 National Hockey League Draft. In 89 career NHL games with San Jose, Phoenix and Pittsburgh, he recorded a 36-30-11 record with a .913 save percentage and a 2.47 goals-against average. Greiss also appeared in one Stanley Cup Playoff game with the Sharks in 2010.