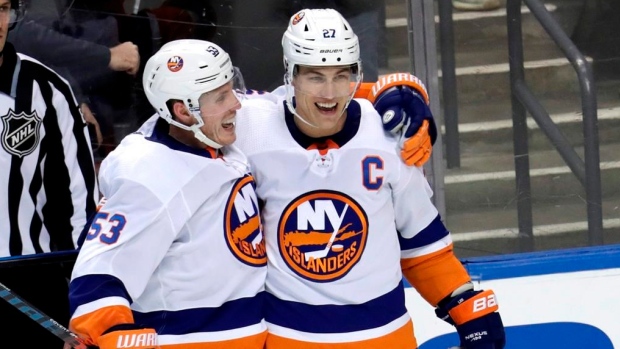 Devon Toews and Mathew Barzal had power-plays goals in a 3:51 span early in the second period and Thomas Greiss made 32 saves to help New York beat Florida 3-1 on Thursday night.

The Islanders swept the three-game, regular-season series with the Panthers for the first time since 2013.

“They were hard to handle," New York coach Barry Trotz said. "We’ve been fortunate that our goaltender has been outstanding (against them this season). We were able to keep their power play in check for the most part in the three games. That’s big, too.”

Mike Hoffman scored for Florida, and Sergei Bobrovsky made 27 saves.

"When you're in their zone, you have to get it to the hard areas," Panthers coach Joel Quenneville said. "You have to be willing to get there and find the puck and fight through the traffic.

Toews opened the scoring 49 seconds into the second period, beating the partially screened Bobrovsky to the glove side off a feed from Jordan Eberle. Barzal added his team-leading 13th goal, off another feed from Eberle, into an open net with Bobrovsky out of position.

"Power-play wise, we were moving it really well and feeling really good," Toews said. "It’s just about getting the opportunity, and with two tonight that’s huge for us. Tonight I thought we played a pretty good team game.”

Hoffman scored midway through the period for this 12th of the season.

Greiss, getting the start in net as New York continues to alternate goalies, made the save of the game with just over four minutes remaining in the third period with a perfectly timed pad stop on a great try by Brett Connolly to the glove side.

NOTES: Islanders D Nick Leddy was once again sidelined as he recovers from a lower-body injury sustained Saturday against Dallas. ... Panthers D Mike Matheson was a healthy scratch. ... Barzal has points (four goals and three assists) in six of his last seven games, while LW Lee has points in five of his last seven games with six points (three goals and four assists).