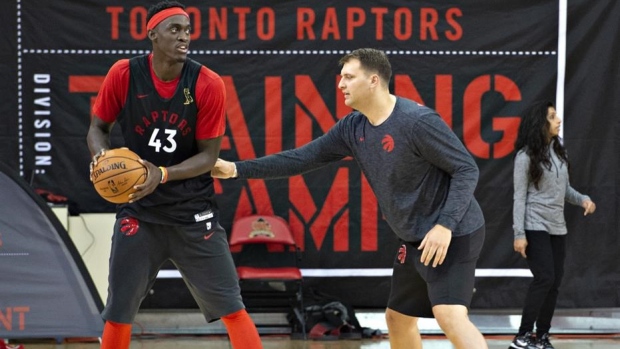 TORONTO – Raptors players aren’t likely to forget the evening of March 11, 2020: the night Utah Jazz centre Rudy Gobert tested positive for COVID-19 and the NBA – followed by just about everything else in North America – came to an abrupt halt.

Some of them were at a launch party for Nick Nurse’s foundation in downtown Toronto, supporting their head coach and getting set to watch him perform on stage with the Arkells when the news broke. Others were at Norman Powell’s charity bowling event nearby.

Having faced Gobert and the Jazz in Utah a couple nights earlier, the team’s entire travelling party was immediately tested – fortunately all tests came back negative – and went into a precautionary quarantine.

Four months later, to the day, the league took a big step towards resuming its season and bringing basketball back.

After arriving on the Walt Disney World Resort campus in Orlando, Florida at staggered times over a three-day moving period earlier this week, all 22 teams participating in the NBA’s attempted restart were scheduled to practice on Saturday. Toronto, one of the last clubs to make its way into the bubble on Thursday, took to the court just after 1:00 p.m.

The Raptors had spent the previous couple weeks training in Fort Myers, a two-hour drive away, but – in accordance with league protocol – were limited to individual workouts. Players would shuttle to the gym in small groups and shoot at their own hoop, with a coach or two rebounding and putting them through light drills.

This was their first opportunity to share the court as a team since that win in Utah on March 9 – the final stop on a five-game West Coast road trip – and their first practice since just before they left on February 27.

“It felt good,” guard Fred VanVleet said over videoconference from Orlando following the team’s spirited return to work, which went just under three hours. “It's been awhile. I think you saw some rust, some excitement and that first day of school type of thing for everybody, coaches and players. It was good. We've got to flush some things out these next couple of weeks and get ready to play, but kind of take a marathon approach. We've still got a long way to go.”

“I'm just really trying to feel my way through it now, to be honest with you,” said Nurse. “Just based on the situation I think it's important for us to play, but I also think it's important to kind of ease in a little bit because we're conscious of health in general. So I kind of started heavier than normal and just told the guys to please self-monitor and let's not get carried away.”

“But for the most part it was really good… A lot of guys [were] doing a lot of things that that we normally do right from the get go here, which was great. Obviously there was some rust and some things that stick out that you have to keep an eye on or that we're gonna have to change, but from a starting point it seems like a really good jumping off point today for us.”

After weeks of playing “one-on-zero”, as Nurse put it the other day, they were finally able to get back to some five-on-five work. It didn’t take long for those competitive juices to start flowing again.

In keeping with his reputation for being one of the league’s most innovative coaches, Nurse opted to split up his regular starters on day one and says he’ll continue to mix up his units as camp goes on.

As they prepare for their August 1 re-opener against the Lakers – and three inter-squad scrimmages that begin on July 24th – they’ll have almost two full weeks of practice.

These first few days will mostly be about conditioning and rhythm, as well as getting back on the same page as a team. Nurse doesn’t expect the latter to take too long, though – the benefit of having a veteran group that was 46-18 when the pandemic hit. Once they’re caught up and finished fine-tuning what they already had in place, they can work on putting in some new stuff ahead of the playoffs.

“We'll find a way to do some experimenting as we put the pieces of the puzzle back together,” Nurse said. “I think that's going to go fast. I sensed a lot of guys grasping all our set calls and all our defensive coverages. It was pretty good.”

The Raptors haven’t had much of a chance to experience life in the NBA bubble as of yet. After their bus arrived on campus late Thursday afternoon, all players and staff had to quarantine in their rooms until they each returned two negative COVID-19 tests 24-hours apart. They were cleared at around 11:00 AM Saturday morning, just in time for their scheduled practice.

“I'm definitely used to quarantine,” said Siakam, who spent most of the pandemic in isolation at his home in Toronto. “Two [more] days [was] nothing. It went by quick.”

The tests have become part of their daily routine over the past few weeks, but Nurse admitted he felt a bit more anxious than usual while waiting for these particular results. It almost felt like that first round of testing, back on March 11, he said.

The Raptors, and the rest of the league, reached another crucial phase on Saturday and are one step closer to playing meaningful basketball again, but they still have a long way to go.

“We just wanna play, man,” Siakam said. “I miss playing basketball. [Saturday’s practice] definitely felt like a basketball atmosphere, and that's all I really care about.”​