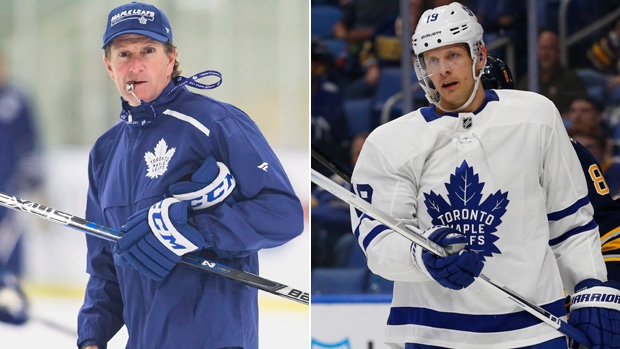 Veteran centre Jason Spezza will be a healthy scratch for the Toronto Maple Leafs in their season opener against the Ottawa Senators, his former team, on Wednesday.

Leafs Lunch on TSN 1050 reacted to the news Wednesday and did not agree with head coach Mike Babcock's decision.

"I quite frankly think it’s a joke," former Toronto Maple Leafs player and TSN 1050 OverDrive co-host Jeff O'Neill said. "I mean Jason Spezza signed for peanuts to play here. He shows up early to help out with the young guys and then you put that in his face. And another thing going forward, in the next five years they’re going to have to look for players to sign for nothing just like Jason Spezza did. And when (potential signings) see that message, they might say, ‘screw that, why would I want to put myself through that?’

"He decided to come here and play a role and you’re telling me Jason Spezza can’t go out on the ice and help dominate the fourth line of the Ottawa Senators. And you use the excuse that he’s got to brush up on his penalty kill?"

"I made it clear that I don’t agree with this decision," former Toronto Maple Leafs defenceman Carlo Colaiacovo and TSN 1050 host said. "We’re talking about a guy who’s played 16 years in the league, over 1,000 games, hometown guy, playing against his former team the Ottawa Senators. I listen to Mike Babcock and he said he’s been clear and that him and Jason are on the same page and he understands that there’s a rotation, but c’mon, that rotation can wait one more game. Give Jason the feeling of coming home, playing for the Maple Leafs. Play this game and if you want to make that rotation you do it Friday night in Columbus in a game that will draw less attention to what the attention the Maple Leafs are going to get tonight.

"I think we can all agree how Mike Babcock feels about Spezza. We knew it was going to be a rocky relationship. And that’s fine, that happens. Don’t make it an example on the first game of the season, especially the home opener. Just let the guy play and then you worry about everything else after.

"Bottom line is it’s really simple, Jason Spezza should be playing tonight," TSN Scouting Director Craig Button echoed, adding Babcock was Mike Modano's head coach when Modano was a healthy scratch in the final game of a season that would have been his 1,500th game.

Babcock said before the game sitting Spezza will give the veteran more time to get comfortable killing penalties.

Dave Feschuk and Steve Simmons also chimed in on the discussion, agreeing that the move was Babcock making a statement to Leafs management.

"Sometimes a scratch is more than a scratch and that one falls into this category," Feschuk said. "Babcock making a statement to management: ‘You may have brought this guy in to his home town. You may have gotten him to sign a minimum salary deal when he had other offers, but he’s not my guy. I don’t want him.’

"The reason given by Babcock, that he needs more work on the penalty kill after 17 years in the NHL and three pre-season games this year, is laughable. This is about Babcock making a statement to management."

"This is about Babcock being small," Simmons said. "Think of it from Jason Spezza’s point of view. This is his hometown, this is the team he chose to sign with and the team he grew up watching as a kid, playing the team that he got famous playing for. A perfect night for him, or what should have been a perfect night, and Babcock made a story out of something that didn’t need to be a story."