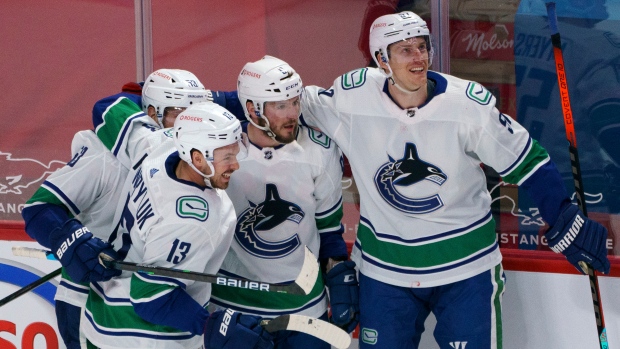 MONTREAL — For J.T. Miller and the Vancouver Canucks, sometimes it's better to be a little lucky than good.

Miller drove down the left side, cut across the front of the net and put a backhand shot past Montreal goaltender Jake Allen to give Vancouver its seventh win in eight contests.

"It was not really textbook," Miller said. "I was on the ice for a really long time but I wasn't really doing a whole lot . . . I still felt fresh.

"It's one of those things I knew I was going against a forward, then when I got by the first guy it's a heat-of-the-moment move that doesn't happen very often. I was pretty lucky to get it by and obviously it was a big goal for us but that's not going to happen too often."

Nick Suzuki forced overtime with a power-play goal at 19:03 of the third, his sixth. He scored with Montreal on a two-man advantage as Allen, who stopped 25 shots, was on the bench.

"It wasn't like a deflating goal," Miller said. "They had a six-on-four with some of the best shooters in the league up top.

"We weren't deflated by it obviously. It takes more than 60 (minutes) sometimes and we knew we had to have a good start. It was kind of a weird start to overtime, they had the puck and were swinging around a lot so you just had to stay with it and bear down when you get an opportunity."

"It was a good team effort right from the drop of the puck," Canucks head coach Travis Green said. "The team checked well, we just played a good road game.

"That's the type of hockey we need to play to have success and we've been talking about it for a long time now. It's nice to get the win."

Corey Perry had the other goal for Montreal (13-8-9), which fell to 0-6 this season in overtime and has lost four-of-five contests overall. The Canadiens were coming off 4-3 overtime loss to Winnipeg on Wednesday to cap a six-game road trip (2-2-2).

"Obviously at one point it's mental but what we need is to bury one and get that over with," he said. "We do that tonight, probably everyone's talking about what a character team we are coming back and tying the game.

"Our guys, for sure they think about it when the time comes. I'm sure a guy like Andy going on a breakaway, he's probably putting more pressure on himself thinking, 'I'm going to end it this time.' Yeah, that's apart of it but we have to stick with it and next time we'll get it."

Montreal opened a six-game homestand with its first contest at the Bell Centre since a 7-1 victory over the Winnipeg Jets on March 6. The Canadiens will host Vancouver again Saturday night.

"It's a really fine line between winning and losing," Miller said. "We're playing the right way and if we believe in our game and have faith in our system and play the right way, most nights we're going to get the results.

"It's easy to get impatient but I think we've done a good job of staying with it and putting a good game in front of us more nights than not."

Prior to the contest, the Canadiens honoured long-time equipment manager Pierre Gervais, who recently appeared in his 3,000th NHL game.

Allen and Perry combined to stake Montreal to a 1-0 first-period lead.

Perry opened the scoring on the power play at 4:15. After Jeff Petry's shot from the point hit the post, Perry knocked the rebound past Demko for his sixth of the season.

Allen, appearing in his 300th career NHL game, was solid throughout the frame as Vancouver outshot Montreal 11-8.

But Gaudette pulled Vancouver even at 2:25 of the second. He redirected Antoine Roussel's centring attempt past Allen for his fourth of the year,

Hoglander gave Vancouver its first lead of the game, deflecting the puck past Allen at 6:37, his sixth of the season.

Vancouver was minus forward Tanner Pearson (lower-body injury). He was hurt in the third period Wednesday against Ottawa and is expected to be out at least four weeks.

Pearson has 11 points (six goals, five assists) in 33 games this season. Forward Jimmy Vesey made his debut with Vancouver after being claimed off waivers from Toronto on Wednesday.

This report by The Canadian Press was first published March 19, 2021.