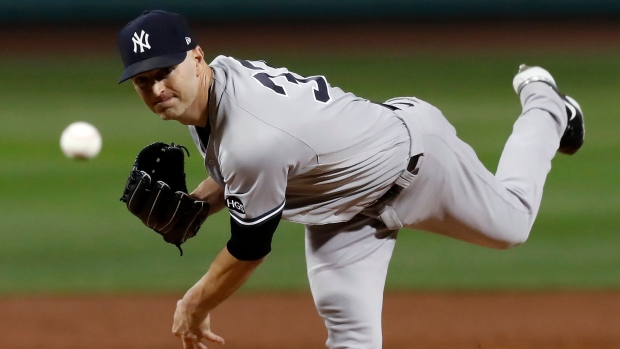 MINNEAPOLIS — J.A. Happ won a World Series with Philadelphia in 2008 and returned to the final round with the Phillies the following season, but he hasn't been back since.

The Minnesota Twins were Happ's pick to try to experience anew the fall success that has often been missing since early in his career.

The left-hander finalized an $8 million, one-year contract with the Twins on Friday, giving the two-time defending AL Central champions — who are carrying a baseball-record 18-game post-season losing streak — a steady 38-year-old for the back of their rotation.

“After family, that’s number two on the list: ‘Does this team have a chance to contend?’” Happ said on a conference call with reporters. “You know they certainly do."

Happ spent the past 2 1/3 seasons with the New York Yankees. Acquired from the Toronto Blue Jays at the 2018 trade deadline, he went 7-0 with a 2.69 ERA in 11 starts down the stretch to finish 17-6. The Yankees then rewarded him with a $34 million, two-year contract.

Happ went 12-8 with a 4.91 ERA in 2019, before struggling at the start of the pandemic-delayed 2020 season, prompting the Yankees to skip his turn. Happ gained strength as the year went on and finished with a 2-2 record and 3.47 ERA in nine starts. His $17 million option originally would have become guaranteed with 27 starts or 165 innings, a threshold reduced to 10 starts with the shortened season. He fell one short.

Happ followed Deivi García as an opener in Game 2 of the AL Division Series for New York and gave up two-run homers to Mike Zunino in the second inning and Manuel Margot in the third of the 7-5 loss to Tampa Bay. Happ said after the game he would have been more comfortable starting.

“Performance-wise, I felt really good about 2020. I thought I was sort of turning the page on the previous year and went back to the way I was throwing the ball for the last five, six years. I felt really good about that, being able to overcome some things during that season,” Happ said. “Great teammates there, and I wish them well, but I'm more just focused on moving forward and excited about this opportunity."

Happ was the second off-season addition by the Twins, who also added relief pitcher Hansel Robles. Jake Odorizzi and Rich Hill became free agents, creating openings in the rotation behind José Berríos, Kenta Maeda and Michael Pineda. Minnesota was third in the AL in 2020 with a team ERA of 3.58.

“We’re looking for the right fit in our clubhouse, the right fit culturally and also the right fit on field,” Twins president of baseball operations Derek Falvey said. “I think J.A. checks all of those boxes and then some. He’s somebody who comes incredibly highly recommended by every coach, teammate and others who have been around him.”

Said Happ: “I spent a few years in this league trying to be a pitcher that I wasn’t, and trying to pitch in a way that’s not productive for me, that’s not utilizing my strengths. I think I finally got to a point where I was able to have confidence in the things that I was actually good at and trust that I could use those and trust that they would work.”