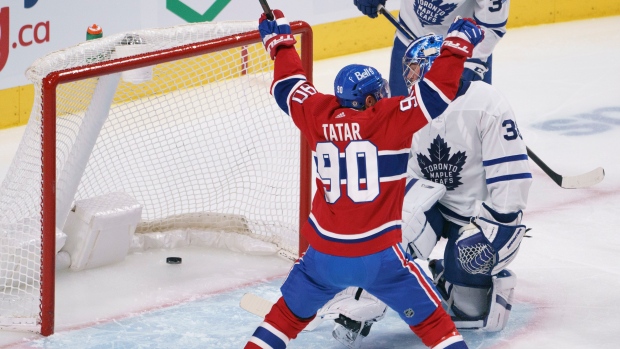 There was plenty of it to go around.

The Canadiens came out strong with two early goals, Josh Anderson put the Canadiens ahead to stay late in the second period and Tomas Tatar sealed the win with an empty-netter, his second goal of the night.

"We really wanted to come in tonight and set the pace and start off the (first) period the right way," Anderson said. "I thought we did that for the most part.

"Obviously they made a good push in the second but I thought we did a lot of good things tonight."

Nick Suzuki had the other goal for Montreal (18-12-9), which ended a three-game losing skid.

Auston Matthews and John Tavares scored in the second period for the visiting Maple Leafs, who had their six-game win streak halted.

Toronto (28-11-3) put itself in a hole out of the gate with one of its worst periods of the season. Montreal outshot Toronto 11-3 over the first 20 minutes.

Campbell turned in a pedestrian performance in his first loss of the year but his team's defensive play was lacking at times.

"I just think the guys deserved to win," he said. "I'm pretty embarrassed by my effort to be honest. It's just not good enough and it cost us the game."

Campbell had set an NHL record with 11 straight wins to start a season.

The Maple Leafs gave up a goal just 77 seconds into the game after coughing up the puck behind the net. The puck careened off a skate to Tatar, who was stationed crease-side for the tap-in.

With Zach Bogosian off for high-sticking, Suzuki fired in a wrist shot from the face-off circle at 7:53 to make it 2-0.

"I thought it's probably as poorly as we've played in a long time," Keefe said. "Of course the good sign of it is the game really could have got away on us and it didn't."

The Maple Leafs came out with more zip in the second period and were rewarded at 9:28 when Matthews scored his NHL-leading 32nd goal of the season. He tipped in a pass from Mitch Marner, who picked up his team-leading 39th assist.

Tavares tied the game at 14:57 when he roofed a backhand after a scramble in front of Montreal netminder Jake Allen.

Anderson restored Montreal's lead at 16:22. He kept the puck on a 2-on-1 break and picked the top corner on Campbell's glove side.

Jonathan Drouin was called for tripping midway through the third period but the Maple Leafs' power-play struggles continued. Toronto managed only two shots and has converted just one of its last 36 opportunities with the man advantage.

Campbell made a pair of strong saves late in the third period, stoning both Anderson and Suzuki to keep it a one-goal game. Tatar then iced the Montreal win at 17:35.

"Our guys never quit," said Canadiens coach Dominique Ducharme. "They believe in themselves. They know they can do some really good things."

Each team had 25 shots on net. It was Toronto's first regulation defeat since dropping a 4-3 decision to the Calgary Flames on March 19.

The Canadiens moved seven points behind third-place Edmonton in the North Division standings.

Montreal has three games in hand on the Oilers, who have 52 points, seven fewer than the first-place Maple Leafs.

Toronto and Montreal both made trades before the league deadline.

The Maple Leafs' highlight move was landing forward Nick Foligno from Columbus while the Canadiens acquired blueliner Erik Gustafsson from Philadelphia. Neither player was in the lineup Monday night.

Montreal and Toronto will face off four times over the last two weeks of the regular season. The Maple Leafs have a 4-2-0 edge in the season series.

The Maple Leafs will return home to play Calgary on Tuesday night. The Canadiens will be back in action Wednesday against the visiting Flames.

This report by The Canadian Press was first published April 12, 2021.